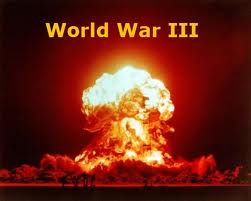 Are we on a timeline to WW3? Current developments in Ukraine and widespread conflict in the Middle East are proceeding according to decades-old US/Zionist desires for domination.

A timeline to WW3

may be developing right before our eyes. It’s a scary prospect, but when you look at the horrible warfare that has happened in the Middle East in the last 3 years – from the bombing of Libya to the attempted overthrow of Syria to the continual drone attacks in Yemen and Pakistan to the demonization of Iran to the constant conflict in Iraq to the violence and upheaval in Ukraine – not to mention the horrific and ongoing genocide being carried out by Zionist Israel against Palestine – there is a very real possibility it could all come together to ignite another world war, and that they could all be preliminary events in a timeline to WW3.

In considering whether the current battles we are living through will eventually become part of a timeline to WW3, we need to place these events in a historical context. It is helpful to recall the prophesies of Albert Pike, the infamous 33° Freemasonic Grandmaster who was privy to the grand plan to create a NWO (New World Order) – a worldwide centralized dictatorship with a small class of wealthy rulers and a large class of ignorant slaves. Pike wrote a letter in 1871 to Mazzini, another insider, outlining the plan to create 3 world wars (2 of which have already happened exactly as he stated they would). In the letter, Pike stated that after WW3, the planet would be ready to accept the New World Order.

William Guy Carr, former Intelligence Officer in the Royal Canadian Navy, quotes Pike’s letter to Mazzini in his book. It is uncanny just how accurate his predictions of 1871 are today:

“The First World War must be brought about in order to permit the Illuminati to overthrow the power of the Czars in Russia and of making that country a fortress of atheistic Communism. The divergences caused by the “agentur” (agents) of the Illuminati between the British and Germanic Empires will be used to foment this war. At the end of the war, Communism will be built and used in order to destroy the other governments and in order to weaken the religions.”

This is exactly what happened in WW1. Britain formed alliances with France and Russia, Germany formed alliances with Austria and Hungary, and the assassination of the Hungarian archduke Ferdinand triggered the conflict and brought everyone in under the terms of their alliance treaties. In 1919 the Russian Revolution took place (backed by US funders of Trotsky and Lenin) which had the result of implementing communism in Russia.

“The Second World War must be fomented by taking advantage of the differences between the Fascists and the political Zionists. This war must be brought about so that Nazism is destroyed and that the political Zionism be strong enough to institute a sovereign state of Israel in Palestine. During the Second World War, International Communism must become strong enough in order to balance Christendom, which would be then restrained and held in check until the time when we would need it for the final social cataclysm.”

Again, Pike was spot on here in naming the opposing ideologies which fought WW2. How the hell did he know this 70-80 years before it happened?

At this point I should mention that many people use this 2nd prediction of WW2 to claim that the Pike letter is a concoction and a fraud, because Nazism didn’t exist in 1871. However, we need to remember that the Illuminati or the Global Elite are long-term planners, or more to the point, are being controlled by non-human forces that plan decades if not centuries in advance. It is hard to fathom from a normal perspective, but if we are to understand the Middle Eastern conflict today, and see the potential timeline to WW3, we need to zoom out and take a broader look.

“The Third World War must be fomented by taking advantage of the differences caused by the “agentur” of the “Illuminati” between the political Zionists and the leaders of Islamic World. The war must be conducted in such a way that Islam (the Moslem Arabic World) and political Zionism (the State of Israel) mutually destroy each other. Meanwhile the other nations, once more divided on this issue will be constrained to fight to the point of complete physical, moral, spiritual and economical exhaustion …We shall unleash the Nihilists and the atheists, and we shall provoke a formidable social cataclysm which in all its horror will show clearly to the nations the effect of absolute atheism, origin of savagery and of the most bloody turmoil. Then everywhere, the citizens, obliged to defend themselves against the world minority of revolutionaries, will exterminate those destroyers of civilization, and the multitude, disillusioned with Christianity, whose deistic spirits will from that moment be without compass or direction, anxious for an ideal, but without knowing where to render its adoration, will receive the true light through the universal manifestation of the pure doctrine of Lucifer, brought finally out in the public view. This manifestation will result from the general reactionary movement which will follow the destruction of Christianity and atheism, both conquered and exterminated at the same time.”

Many of the current conflict in the Middle East – whether overtly Zionist in Gaza and the West Bank, or more covertly Zionist in their backing of Al-Qaeda/ISIS/ISIL/IS or whatever the heck they are calling themselves now – is attributable to the US-Israeli axis of terror. When Israel is not directly exterminating Muslims and Arabs in its Palestinian genocide, it is funding extreme Islamic terrorists to segment and weaken all the Islamic countries surrounding it. Brandon Turbeville recently did some excellent analysis exposing this. Also, there is considerable evidence that Israel’s Mossad orchestrated 9/11 on American soil, from which the whole fake “War on Terror” and demonization of Islam springboarded. With the Rothschilds being part of the hidden hand that is controlling the US and Israel, we can see how the conflict and hatred is being incited to the point where it may explode into a world war.

Add Russia into the Mix …

On top of Pike’s predictions, we can add US hegemonic aspirations to control Eurasia and subdue Russia and China into the mix. These psychopathic desires for global domination are well reflected in the thinking and writing of Zbigniew Brzezinski, former adviser to US President Carter and also a big influence on Obama. He has consistently advocated a policy of dominating the Eurasian countries surrounding Russia and China in order to encircle those 2 mighty nations and one day defeat them.

So on the one hand we have Israel hellbent on controlling all the land from the Nile to the Euphrates (which means stealing and owning part of Egypt, Lebanon, Syria, Iraq and more), teamed up with a military-crazed US hellbent on dominating all of Eurasia, being turned against those Islamic nations that refuse to become puppet states of America (Syria and Iran), supported by Russia and China. The EU will be brought in on the side of NATO and America, and before you know it, we could have WW3. Researchers such as David Icke and reporters such as Charlie McGrath are among many who are beginning to see what might transpire.

The balance of evidence now indicates that the shoot-down on MH17 over Ukraine was another US-backed false flag attack (thanks to Eric Zeusse for this excellent analysis, including photographic evidence showing the plane front shot by close-range bullets from both sides). Was the aim to frame Russia and garner enough international support to launch a war against them?

Ukraine could very well spark a global war, and be the last remaining date on the timeline to WW3. Let’s hope not; let’s hope there is enough sanity and desire for peace among our leaders to prevent it.