North Korea Provocation: The Background and Context You’re Not Being Told

North Korea Provocation: The Background and Context You’re Not Being Told 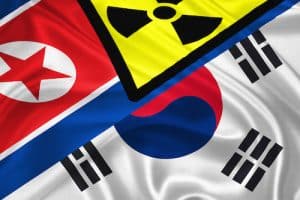 is dominating the attention of the media and many people around the world, who are fearful the tensions between North Korea and the US may erupt into a war. If China gets involved (and let’s face it – how can China not get involved if fighting breaks out on the Korean peninsula which is right on its doorstep?), we could be into a World War 3 scenario with the US on one side and China (and therefore Russia) on the other. The term North Korea provocation itself is ambiguous, because it could imply that the North Korea is the active party doing the provoking, or it could imply that North Korea is the passive party being provoked. History clearly shows wherever Team USA is involved, the American political and military elite are always at least partly (and usually fully) the active agents doing the provoking, although they do a masterful job of spinning it to trick you into thinking the other party is the crazy, unlawful and aggressive one. So what’s the background and context to the current North Korean provocation? 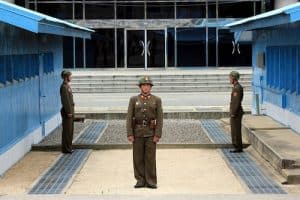 Soldiers in the DMZ (Demilitarized Zone) of the border between South Korea and North Korea.

Listening only to the MSM, you would believe that North Korea is being run by an irrational madman Kim Jong Un who is provoking the US, is hellbent on war and who is too crazy for diplomacy to be a serious option. Yet … are you aware that:

– the US entered the Korean War and proceeded to bomb North Korea into smithereens under the leadership of bloodthirsty generals like Douglas MacArthur (who led the United Nations Command) and Curtis LeMay?

– the US used 635,000 tons of bombs and 32,557 tons of napalm against North Korea, more than they used in the entire Pacific War against the Japanese during World War II?

– LeMay stated, “We killed off … 20 percent of the population” and “We went over there and fought the war and eventually burned down every town in North Korea”?

– That MacArthur’s MAD plan was to try to win the war against North Korea in 10 days by dropping “between 30 and 50 atomic bombs … strung across the neck of Manchuria” that would have “spread behind … a belt of radioactive cobalt”?

– That the Korean War ended in 1953 only with an armistice, not a Peace Treaty? That this technically means the war is still going? And that this gives the US the excuse to continue treating South Korea as its vassal state (as it treats Japan, Australia, Germany, France and many, many nations in the world), because if there were a formal Korean Peace Treaty in existence, the US would have no legal basis for the occupation of South Korea with American military bases and troops? 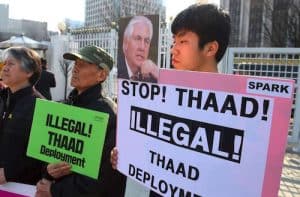 North Korea provocation: the US is provoking North Korea by installing the THAAD missile “defense” system (i.e. offense system) in South Korea right near North Korea’s border, but there are some South Koreans protesting it.

The Missing Context: Constant US Provocation of North Korea

If you knew all of the above, did you also know that:

– Many South Koreans are tired of South Korea being a US puppet state? The opposition party and other forces behind the impeachment of the South Korean president want the US out of South Korea? They also want the THAAD missile system recently installed by the US dismantled?

– George W. Bush, Dubya or George Bush Jr. (you know, the same one who proved that evolution goes in reverse), being a neocon puppet, declared that North Korea was part of the axis of evil? This is the same George Bush that stated that the US would grant itself the right of striking first by way of a preemptive attack? That because of this American policy, North Korea left the nuclear NPT (Non-Proliferation Treaty), since the US wasn’t following its own rules?

– The Koreans tried re-uniting despite all the forces against them wanting to keep them separated? It was called the Sunshine Policy. 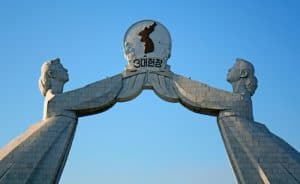 The Korea reunification monument (located south of Pyongyang and opened in 2001 to commemorate Korean reunification proposals put forward by Kim Il-sung). Sadly, reunification has yet to happen in Korea due to the divide-and-conquer strategies of the New World Order.

Korea had a Sunshine Policy (policy of reunification) from 1998-2008. Yes, it’s true: South Korea and North Korea were moving closely towards reunification when the Bush-Cheney Administration, a hotbed of traitors, globalists, Zionists and neocons, moved to demonize and isolate North Korea. Stuart Bramhall writes:

“… in 1998 South Korean president Kim Dae Jung began his Sunshine Policy aimed at lessening tensions and building reconciliation between North and South Korea. In June 2000, leaders of the two countries held a historic three-day summit in Pyongyang (the first in 50 years) and signed a pact in which they agreed to work towards reunification. Among other provisions, the agreement included substantial South Korean humanitarian aid to address North Korea’s chronic food shortages, loosening of restrictions on South Korean investment in North Korea, the opening of North Korea’s Kumgang Tourist Region to South Korean visitors, the establishment of a family reunification program, the opening of rail links through the Demilitarized Zone (DMZ) and a worker exchange program permitting South Korean workers to work at North Korea’s Kaesang Industrial Park.

In 2000, Kim Dae Jung won the Nobel Peace Prize for his successful implementation of the Sunshine Policy.

Unfortunately George W Bush, who took office in 2001, had very different plans for the Korean peninsula. In his view, a paranoid militarist North Korean threatening US allies South Korea and Japan was the most potent argument he had to justify his obsession with building a missile defense system … the immediate trigger for these moves was a visit by Japanese prime minister Junichiro Koizumi to North Korea in a first effort to normalize relations between the two countries. In the view of the Bush administration, an independent economic-political block consisting of Japan and a unified Korea posed a serious strategic threat to US dominance in Asia and had to be stopped.”

If you knew all of that, did you further know that:

– The US and South Korea have been conducting joint annual military drills and war games for decades (now called Foal Eagle) which simulate engaging North Korea in war? That this year the games were given the name Operation Decapitation and practiced for the attack and overthrow of North Korea? That this year almost 400,000 soldiers participated?

– North Korea agreed to suspend its nuclear tests if the US agrees to end these annual war games along its border?

– As Joe Clifford writes in his article What The Corporate Media Never Tells You About North Korea: “North Korea, China, and India are the only 3 nations who have committed to a “no nuclear first” policy? They have pledged never to use nuclear weapons first, but of course reserve the right to use them if attacked.”

Funny, but the PM of staunch US ally Great Britain, Theresa May, shocked many people by recently declaring that the UK would be willing to use nuclear weapons in a first strike (just as the intellectually challenged Dubya had claimed). Why are the US and UK allowed to openly and brazenly claim the right to attack (and not be dismissed as aggressive, mad and irrational), but other country’s leaders cannot?

I would not like to live in North Korea, nor live under Kim Jong Un. That being said, do you really think the complicit Anglo-American-Zionist MSM is demonizing him because they care so deeply about the plight of the average North Korean? Any leader who doesn’t play ball with the US get demonized as a repressive dictator. He gets targeted for assassination while his country gets targeted for war. Just look at Manuel Noriega in Panama, Saddam Hussein in Iraq, Mummer Gaddafi in Libya and Bashar Al-Assad in Syria. As Clifford again writes:

“… the demonizing of Kim Jong-un continues as we move towards another war, and once again the public buys into the myth … Sixteen years later we are still at war in Afghanistan. War is the result of failed diplomacy, or the absence of diplomacy. Perhaps we did not want diplomacy, perhaps we don’t want diplomacy now.

Do you know that North Korea has repeatedly asked the US to engage in bilateral talks, to cool off the ever-escalating tension? The offer was flatly rejected by both Obama and Trump. Can you resolve differences within your family without dialog? No dialogue, no peace. Why won’t the US talk to North Korea??”

Conclusion: Look Carefully at all Sides of the North Korea Provocation

The propaganda is thick, and you have to take a step back and really think for yourself. Astute readers of the news will ask themselves why North Korea and why now? The US bombed North Korea into oblivion in 1953, the same year it also embarked on massive foreign meddling programs by violently overthrowing the democratically elected prime minister of Iran (Mossadegh) and also violently interfering in the affairs of Guatemala. Since 1953, the US has bombed, invaded and attacked over 30 countries, while North Korea has not even invaded a single one. Experts suggest North Korea has around 8-10 nuclear weapons (with no effective delivery system) while it is a fact that the US has 6800 (of which a large number are deployed against North Korea).

And yet we are supposed to believe that North Korea is a dangerous rogue state that is posing a genuine threat to the US?

The propaganda is thick.

Time to wake up.

Time to see the truth about the North Korea provocation.

Time to rein in the the most destructive nation in the history of the world: the USA.

Previous Article
Trump’s First 100 Days in Review
Next Article
Dark Suits Rule the US and Its Puppet Presidents, Reveals Putin (Stating the Obvious)