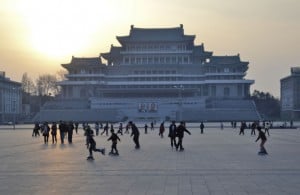 North Korea deception is being used by the mainstream media to trick you.

The mainstream media is trying to give the impression that North Korea is itching for war and is constantly parading its tanks, missiles and army through its main square in Pyongyang. Except there’s one problem to this: there’s no tanks in the main square. None. How do we know this?

As this article from addictinginfo.com reveals, North Korea has a vibrant tourism industry and there are still plenty of Westerners visiting there. One such tourist, Patrick Thornquist, a teacher from Chicago, went to Pyongyang’s Kim Il Sung Square and instead of seeing tanks, he saw children rollerskating or rollerblading (see picture above). Apparently new leader Kim Jong Un has been building many rollerskating parks and promoting entertainment facilities since he came to power.

Understandably, Thornquist was struck by the incongruity between what he personally experienced and what the mainstream media was depicting on TV and in its newspapers. He watched the news later that day and saw that it was still featuring footage of tanks. “It was definitely interesting to see tanks on BBC in the hotel, as if that was that day, when we’d been in that square a couple of hours earlier and nothing like that was happening,” he said.

This North Korea deception is undeniable evidence that the mainstream media is deliberately misleading people to given them the false idea that North Korea is ready for war and about to nuke South Korea and America into oblivion. It’s part of the agenda to brand North Korea as part of an “Axis of Evil” that must be destroyed before it destroys us. Do you see the argument? We must strike preemptively or else we will be obliterated. Scare people into supporting aggression and striking first. This is exactly what happened with Iraq, Libya and other countries. It’s part of the grander New World Order scheme to draw nations into war across the world and ignite WWIII – and thus bring us closer to a dictatorial One World Government.