We know there’s an extensive network of underground tunnels and bases (DUMBs) under US soil. Is Walmart shutting down stores for 6 months to connect to it?

Is Walmart connecting to the US underground tunnel network?

Speculation is mounting after Walmart’s shocking and abrupt decision to shut down 5 of its stores, each for 6 months, in 4 different states (Pico Rivera, CA; Midland, TX; Livingston, TX; Tulsa, OK; Brandon, FL). Apparently, employees were given only 5 hours notice. They were also given 60 days severance pay. The official excuse given by Walmart is plumbing problems, which is sheer nonsense. It does not take 6 months to repair a few toilets, or even to replace a sewer line. In fact, Walmart could erect an entire new store within that time frame! Giant corporations run on greed and profits; it is unthinkable that they would willingly forgo 6 months of revenue for such a small problem. So what’s really going on? It’s not just labor activism. Is Walmart perhaps preparing for some massive event due to come? Are they connecting to the US underground tunnel system?

The Enmeshment of Walmart and the Corporate US Government

Before answering that, it’s worthwhile taking a closer look at Walmart’s massive place in today’s American society. Fascism as defined by former Italian dictator Benito Mussolini was the merging of corporate and governmental power, and was more aptly called corporatism. That’s what the US (and other Western powers) are today: corporate fascist empires. The US is literally a corporation; the “United States”, the “United States of America” and all other synonyms have all been trademarked, incorporated terms since 1871. Additionally, we know that the elite controllers at the top of the pyramid use the revolving door to switch between the private and public arenas as it suits them. Many top executives working at big firms go into government to regulate the very industry and companies they were just involved with! Examples of this are copious. Remember too that many top firms actually drive US policy, such as Monsanto driving US foreign policy regarding France and its anti-GMO position!

From that perspective, then, it comes as no surprise to discover that Walmart and the US Government are already enmeshed. This video of former DHS head Janet Napolitano shows how Walmart already had a deal with the DHS, and helped it spread its fear propaganda message to the public to be suspicious of each other – and of course to report anything suspicious to your local, friendly Walmart manager. US troops overseas in Yemen may have taken control of a Walmart store there by force (as reported by Sorcha Faal).

Walmart could well be gearing up to become a governmental Distribution Center in an emergency (created or otherwise) or in a martial law scenario. In that kind of situation, Walmart could be the hub (like Camp FEMA) where people are being sent to be forced vaccinated, where dissidents and activists are being sent to be forcibly detained, or (I hope it would never come to this) where the public is being sent to be forced microchipped. It also unsurprising to those who are paying attention that Walmart (in this video) is using local police to guard its perimeter – further proof that Walmart is joined at the hip with the Federal Government, and also evidence that Walmart is hiding something pretty big. 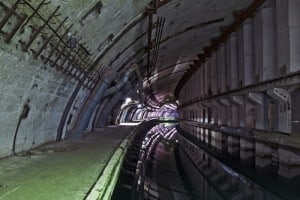 Inside view of an underground base in Russia.

Could Walmart Be Connecting Itself to the Underground Tunnel Network?

Given that, there is ample reason to believe that Walmart could be connecting its stores to the underground tunnel network. Take a look at this map, which overlays the 5 closed Walmart stores, and a rough map of what we believe is the existing underground tunnel system underneath American soil: 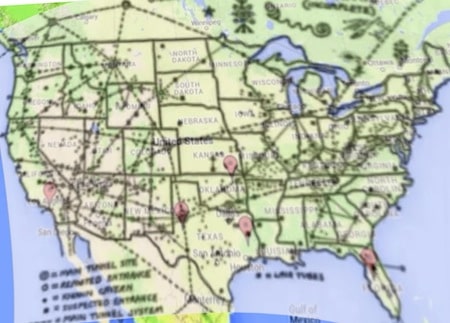 Why Now? Why So Abruptly?

Although it’s feasible to believe that Walmart is connecting to the underground tunnel network, as other military installations, military bases, airports and private elite houses have done, there is still a lot of mystery surrounding the event. Why now? Why so abruptly? Why couldn’t they have planned this out so as not to draw so much attention?

At this stage we can only speculate. Hopefully some activists can pierce the police guard and capture more photos. However, it could well indicate that a large event is coming down the pipeline.