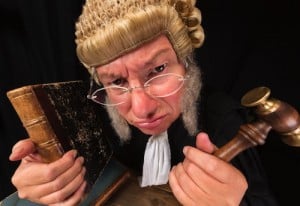 One common aspect of legal corruption is how judges trick people into being “federal citizens” with Government-granted privileges, rather than state citizens with unalienable rights.

Legal corruption in the US has been exposed

by a brilliant woman whose name is Tamah Jada Clark. She recently served a most unusual notice upon the courts in Georgia. It is highly unlikely you will ever have seen something like this! Clark’s legal Notice, entitled “To F*ck This Court and Everything that it Stands For“, is a highly entertaining and knowledgeable piece of writing. It displays a great depth of knowledge of law, the American legal system, natural and unalienable rights, the history of the United States and other principles of sovereignty, mixed with raw emotion and colorful expletives. It is fueled with tremendous knowledge and righteous anger, directed against a high-up representative of a system that is seeking to enslave the overwhelming majority of mankind. To some, it may seem unnecessarily crude or not academic or dry enough; but the reason I love it is because it encapsulates exactly the kind of spirit humanity needs to rise up, kick out the impostors, and attain global peace and freedom.

Clark has commented upon The Freedom Articles before, in my article entitled “16th Amendment Income Tax Fraud: Evidence Shows it Was Never Ratified!“, where she links to her free and well researched guide “Why Most Americans Do Not Inherently Owe Federal Income Taxes“. In that guide she explains how judge Willis Hunt has repeatedly engaged in legal corruption and denied her justice, and how she is consequently exposing him and the entire system he represents. It is well worth reading. The basis is simple yet widely misunderstood: there is a big difference between a federal citizen and a state citizen. They are, in Clark’s words, “mutually exclusive concepts”. A federal citizen is a creation of the 14th Amendment to the US Constitution in 1868, which created a whole new class of citizenry, ostensibly to ensure everyone was equal and to stop slavery. However, like many aspects of the global conspiracy, there is always the public reason for doing something, and the real reason for doing something.

US Federal citizenship may seem like a dandy idea until you read the fine print. By accepting that title, you immediately give up sovereignty, rights and freedoms. Why? Because the real power and authority in American society (and any society for that matter) comes from The People. The People got together and formed States. The States then got together and formed a union to create a loose, weak, decentralized Federal Government, bound by the Constitution. That Federal Government then creates citizens. Here is an (abridged) chain of authority (there is more to the story than this, because the Federal Government has also created fake States etc. under its corporate jurisdiction, but this will do for illustration):

It is a maxim of law that he who creates, controls. The Federal Government is inviting you to step out of your role as one of “We the People” or your title as state citizen, and to step into being a federal citizen. You are then moving from being one of the owners, masters and creators of society, to one of the lowliest employees/slaves in the hierarchy.

Some Excerpts from Clark’s Notice

Clark nails the judge for trying to get away with dismissing her case on a faulty legal basis. Here are some excerpts from it:

“Any idiot can take a look into the history of American jurisprudence through studying congressional records, U.S. Supreme court cases, etc. – as I have done – to realize that these United States of America have been overthrown. The American people – due to their own neglect of civic duty and responsibility to educate themselves and their children – have allowed this to happen.”

Beware of Giving Up Unalienable Rights for Civil Rights and Privileges

The moral to the story in all of this is simple: don’t give up your inherent, unalienable, natural rights for Government-granted privileges. The Founding Fathers and all who fought in the battles to break free of King George and the European bankers (the Rothschilds) were striving to set up a society where people “came with” intrinsic rights attached, just by virtue of being alive. These rights could never be legislated or regulated out of existence.

Whether a society shines with freedom or descends into tyranny hinges on matter such as rights vs. privileges, and state citizens vs. federal citizens. Make sure you know the difference, and don’t fall for the legal corruption trying to convince you otherwise.