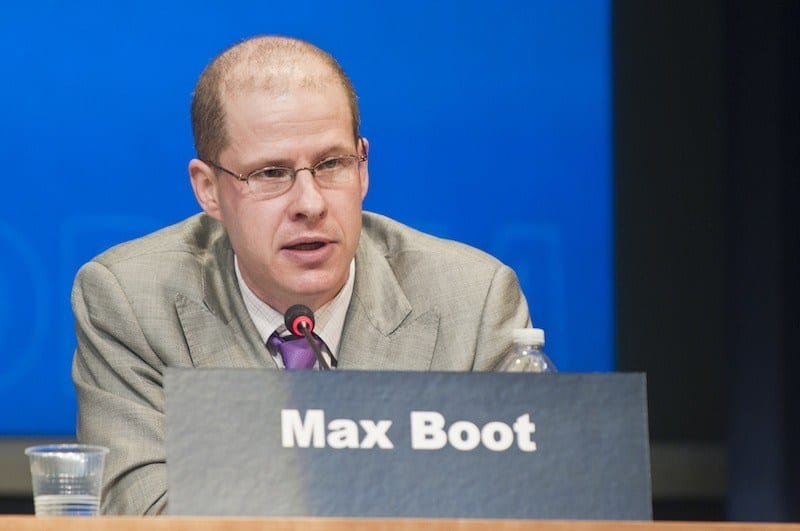 Iraq-raping neocon & PNAC member Max Boot is annoyed people keep bringing up the Iraq thing – the MILLION people killed due to his advocacy of that war.

wants to just admit he wrong was advocating a war that killed 1,000,000 people – and be done with it. There’s so much going on in US politics right now that it’s hard to know what to write about. With all the shouting about the election, impeachment, Trump’s bogus Palestine “deal” and so many other important political issues competing for airtime with Kobe Bryant’s death and coronavirus fear porn, it feels like we’re already at white noise information saturation, and it’s not even February yet. Things are going to get a whole lot noisier next month when the Democratic presidential primaries (and all the establishment manipulations that will necessarily accompany them) get underway, and Julian Assange’s extradition trial begins.

One of the many interesting developments that I can pluck out of this cacophony to earn my keep here has been the hysterical response to Bernie Sanders’ polling bump from the Bush-era neoconservatives who’ve been rehabilitated by a weird new alliance with the Democratic Party in the age of Trump. In just the last few days we’ve seen a deluge of smear pieces against Sanders published in mainstream news outlets by virulent “never-Trump” neocons Bret “Bedbug” Stephens, David “Axis of Evil” Frum, Jennifer “John McCain is too dovish” Rubin, and Max “The Case for American Empire” Boot.

Which has turned out to be a good thing so far, for two reasons. Firstly it has ripped off the mask of woke progressivism that these neoconservative war whores slapped on their faces three years ago to promote mass murder within the Democratic establishment’s astroturf “Resistance” to Trump. Secondly it has educated an entire new generation of young voters about the evils of the Iraq invasion, and who helped facilitate it.

“You can trust me now,” I said, “precisely because I have changed my mind. Don’t trust anyone who hasn’t.”
⁰Which brings me to Bernie Sanders, who never seems to have changed his views about anything.

It is always a good sign when a bunch of pundits who push for increased military aggression at every opportunity are upset about the same thing, but I’m going to single out Max Boot here because his Bernie tantrum has been especially hilarious to watch.

In an article for The Washington Post titled “Bernie Sanders is ‘insanely consistent.’ That’s nothing to brag about.“, Boot bizarrely decided to attack Sanders on the fact that he hasn’t often had to admit that he’s been wrong about things.

“But it is true that I’ve rethought my views on some important matters, such as the Iraq War, and started speaking out on issues such global warming, gun control and white privilege where reality conflicts with conservative dogma,” Boot writes, adding that he can be trusted now “precisely because I have changed my mind. Don’t trust anyone who hasn’t.”

It is fascinating that Boot should choose consistency as a line of attack against Sanders, because he himself has been remarkably consistent throughout his entire career. He’s just been consistent in the other direction.

Promoting fiendishly aggressive interventionist agendas everywhere from Iraq to Afghanistan to Libya to Syria to Iran to Russia, the former PNAC member Boot has been a leading narrative manager for some of the most catastrophically disastrous military interventions in living memory. He has not just promoted imperialist agendas which destroyed the lives of untold millions of human beings, but has also consistently promoted the pernicious underpinning philosophy of that imperialism as in his 2001 masterpiece “The Case for American Empire“.

And that is the one and only reason Boot remains gainfully employed as a famous and widely circulated mainstream foreign policy analyst. He has no redeeming characteristics. He is not smart. He is not charming. He is never, ever right about anything. He simply advocates for the deployment of expensive military equipment consistently and reliably. The oligarchic media love that in a guy.

Iraq-raping neocon Boot, who has been giddy with excitement that his fellow traveller John Bolton has entered his side of the impeachment debate, wrapped up his unintentional self-parody by cheerleading Trump’s regime change interventionism in Venezuela and the right-wing military coup in Bolivia. After its publication he quickly found himself under fire on Twitter by the Sanders campaign’s David Sirota, who rightly criticized his forceful promotion of the Iraq invasion. Boot responded by whining that the “Bernie Bro” should accept his admission that Iraq was a mistake and forget about the whole thing.

“Me: I was wrong and I admit it, but I learned from it. Bernie should too. He’s been wrong about some stuff. Bernie Bro: You were wrong. Why should we listen to you?”, Boot tweeted.

And that just says so much about the coddled, insulated, completely unchallenged life that these mass media pundits are accustomed to, right there. To believe that you can help pave the way for a war that kills a million people based on lies and then years later say “Oh yeah I made an oopsie with that one, I need a do-over” requires an unbelievable amount of entitlement and privilege, let alone to be able to self-righteously hold that admission up as some kind of superior virtue that is worthy of praise and deference.

You don’t get to help murder a million human beings and then act indignant when people bring it up. That is not a thing. Your admission of wrongdoing does not undo the wrong that you did, and only someone who has been raised in a consequence-free environment their entire life could possibly believe that it would.

Striking that Trump lawyers pretend Bolton smoking-gun evidence doesn’t exist. And that so many GOP senators still argue that there’s no reason to hear from Bolton. The lack of GOP outrage is outrageous.

Hey Max? If you ever get tired of being completely wrong about everything, here’s a hot tip for you: maybe start with crossing off the idea that murdering a bunch of people is an ideal solution to every problem. Normal people don’t think that way. That’s why you’re wrong more often than any normal person. It really is that simple.

Nobody who promoted the unforgivable Iraq invasion should ever be listened to about anything for as long as they live. They certainly should not be elevated in prominent slots on mainstream news outlets. They should not even be able to find employment anywhere more glamorous than a McDonald’s.

It is good that these people are exposing themselves, and it is good that more people are learning about the Iraq invasion. Nothing has ever been done to make right the unfathomable evils which were inflicted upon our species by that one horrific act, let alone the many other disastrous interventions which have been endorsed by Max Boot.

Let’s all hope for a sane world where mass military slaughter is seen for what it is, and where war whores like Iraq-raping neocon Max Boot are seen for what they are, and where both of these things fade into obsolescence forever.