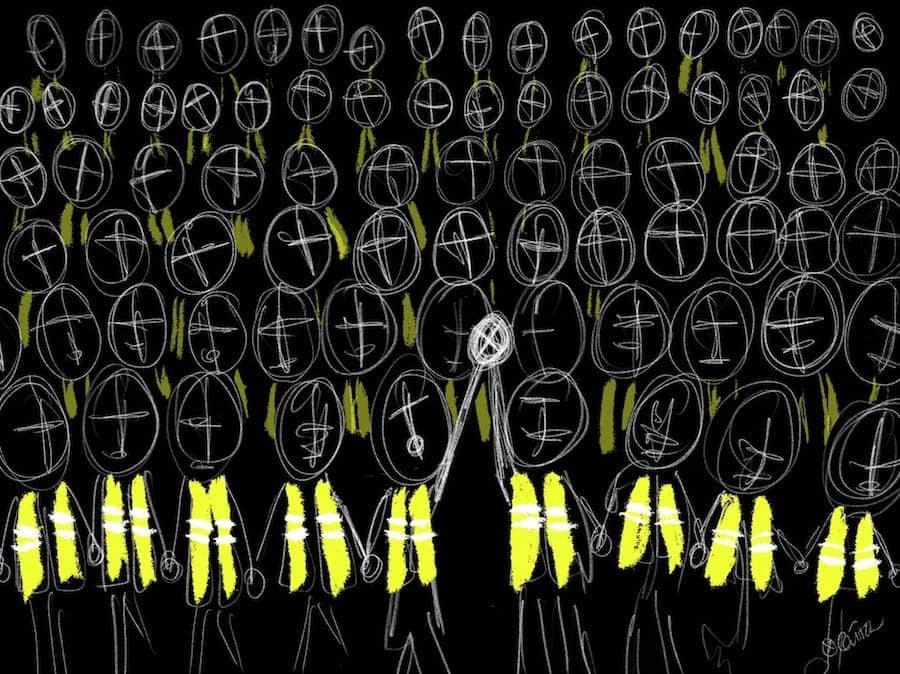 The Establishment fears you. It doesn’t fear Trump, it doesn’t fear Bernie and it doesn’t fear any particular politician. It has developed how a clever system to control 1 person in the White House (whoever that is), however it cannot control an awakened united populace.

The Establishment fears you.

During the George W Bush administration it was popular in conspiracy circles to speculate that events might be orchestrated which would allow the Bush family to complete a coup against the US Constitution and hold on to power indefinitely. Such paranoia and suspicion of government power in the wake of the extraordinary post-9/11 advancements in Orwellian surveillance programs and unprecedented military expansionism were perfectly understandable, but predictions that the younger Bush would not cede power at the end of his second term proved incorrect. In today’s hysterical Trump-centric political environment we now see mainstream voices in mainstream outlets openly advancing the same conspiratorial speculations about the current administration, and those will prove incorrect as well.

What these paranoid presidential prognostications get wrong is not their extreme suspicion of government, but their assumption that America’s real power structures require a certain president to be in place in order to advance depraved totalitarian agendas. As anyone paying attention knows, intense suspicion of the US government is the only sane position that anyone can possibly have; the error is in assuming that there is no mechanism in place to ensure that the same agendas carry forward from one presidential administration to the next.

Schiff dwelling on the fact that Trump departed from the talking points prepared for him by national security officials so he could act “contrary to official US policy,” which is to “deter Russian adventurism.” Glad to know even the president is not permitted to change US policy

In a sense, the conspiracy theories about a Bush coup were actually correct: the Bush administration didn’t truly end. All of its imperialist, power-serving agendas remained in place and were expanded under the apparent oversight of the following administration. The same thing happened after the Obama administration, and the same thing–whether in 2021 or 2025–will happen after the Trump administration. The disturbing fact of the matter is that if you ignore election dates and just look at the numbers and raw data of US government behavior over the years, you can’t really tell who is president or which political party is in power at any given point in time.

The mechanism which ensures the perpetuation of the same policies from administration to administration used to be referred to by analysts as the “deep state”, back before Trump and his supporters hijacked that term and began using it to essentially mean something like “Democrats and anyone who doesn’t like Trump”. Originally the term deep state referred not to one political party, nor to some shadowy cabal of Illuminati or Satanists or reptilians, but to the simple and undeniable fact that unelected power structures exist and tend to influence America’s official elected government. It wasn’t a conspiracy theory, it was a concept used in political analysis to describe how US government agencies and plutocrats form loose alliances with each other and with official Washington to influence government policy and behavior.

It is inevitable that such a permanent second government would exist in the current iteration of the United States, if you think about it. It’s impossible to have a globe-spanning empire of the sort America now has without long-term plans spanning years or decades for securing control of world resources, undermining rivals, securing more compliant allies, and ensuring military and economic hegemony. If the US were a normal nation which simply minded its own affairs, a permanent government wouldn’t be necessary. But because it isn’t, one is.

I very seldom use the term deep state anymore, because its meaning in mainstream discourse has been completely corrupted. Now when I want to point to America’s permanent unelected power structures I usually use the word “oligarchy” or “empire”, or simply “establishment”.

This is why I haven’t been especially focused on the US presidential race, despite the Democratic primaries hitting fever pitch intensity. While I believe the race can be a useful tool for forcing establishment propagandists to expose themselves (virulent “never Trump” neocon Bret Stephens just came out in support of Trump if the Democratic nominee is anyone to the left of Pete Buttigeig, for example), the result of the 2020 election isn’t going to change a whole hell of a lot.

This might be a bit offensive to both Trump supporters and Sanders supporters, but it’s true.

Whenever I point out that the current administration has been advancing many longstanding agendas of the CIA and neoconservative war pigs–agendas like military expansionism, imprisoning Assange, regime change interventionism in Iran and Venezuela, and reigniting the Cold War–his supporters always come in saying “If he’s working for the establishment how come the establishment is working so hard to get rid of him, huh?”

Well, for starters, they’re not. Nobody who can count Senate seats believes Trump will be removed from office in the current impeachment sideshow, and everyone who understood Russiagate knew it was going to dead-end at nothing. If they really wanted Trump gone they wouldn’t be pussyfooting around with a bunch of kayfabe combat that they know will never hurt him. Obviously he wasn’t the preferred 2016 choice of certain factions within the establishment, but there are mechanisms in place to ensure that the empire can tick right along with a less-than-ideal president in the White House.

This will also hold true if Sanders miraculously makes his way through another rigged primary, and then through whatever sabotage gets thrown his way in the general election. Sure he might be able to sign a few somewhat beneficial executive orders and we probably wouldn’t see him flirting with an Iran war, but US imperialism will march on more or less unimpeded and his popular progressive domestic policies would require congress to successfully implement. At best he’d be a mild reformer who uses the bully pulpit to help spread awareness while being narrative managed on all sides by the billionaire media, and any changes he manages to squeak through which inconvenience the establishment at all will be reversed by a subsequent administration.

Obviously the establishment would rather have someone in the White House who doesn’t constantly put an ugly face on the empire by accidentally exposing its mechanics all the time as Trump does, and obviously it would rather have an incompetent oaf like Trump in office than someone who actively points out the evils of oligarchy and imperialism like Sanders. But the establishment which runs the US-centralized empire is not afraid of Trump, and it is not afraid of Sanders. It’s afraid of you.

The unelected power establishment has ways of ensuring its dominance amid the comings and goings of America’s official elected government; they are perfectly capable of dealing with one man being a less than ideal steward of the empire. What they absolutely cannot deal with, at all, is the prospect of ordinary people finally rising up and using the power of their numbers to force real change. That is what they are really fighting against when they try to sabotage populist candidates: not the candidates themselves, but populism itself.

You wouldn’t know it from reading the billionaire media, but the Yellow Vests protests in France are still going on and have remained widespread for more than a year now. This lack of coverage is partially due to the fact that establishment narrative managers are responsible for conveying the idea that the only governments whose citizens dislike them are those which haven’t been absorbed into the imperial blob like China and Iran. But it’s also because the propagandists don’t want us getting any ideas.

The reason the propagandists work so hard to manufacture the consent of the governed is because they absolutely do require that consent. If enough people decide that the status quo isn’t working for them and begin rising up to force it to change, there’s not really anything the establishment can do to stop them. Right now the only thing keeping people from rising up in this way is the fact that they’ve been successfully propagandized not to, and the propagandists intend to keep it that way.

But eyes are beginning to open. If real change is coming, it will come from there. Not from electing anyone president, but from a large-scale awakening to the reality of our situation. The only thing standing in the way is a thin layer of narrative fluff.

[This is why We Don’t Need a New President; We Need a New Consciousness and a New System – Ed.]

Previous Article
Iraq to Neocons: Get the Hell Out of Our Country
Next Article
Iraq-Raping Neocon Upset That People Keep Bringing Up The Iraq Thing