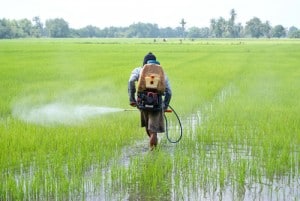 What’s the real cause of the microcephaly cases? Zika, or lack of basic sanitation, plus environmental poisons like the insecticide pyriproxyfen?

Zika may not be the bad guy

after all. Instead of a sensational and scary virus, there may be a more mundane yet far more dangerous cause of the recent cases of microcephaly in South and Central America – in addition to the obvious causes of poverty, lack of sanitation, lack of nutrition and lack of access to medicine. Two health reports, released on Feb. 2nd and 3rd 2016, suggest that pyriproxyfen (a larvicide or type of insecticide used to control mosquito populations by inducing malformations in them) may be the cause of the recent rise in microcephaly. Why? Because, according to the doctors and health experts who authored the reports, there has been an increase in the use of pyriproxyfen in the last 18 months right in the areas where the microcephaly cases have increased – and the pesticide has been put into the drinking water of the affected population!

The first report comes from an Argentinian group of doctors called Medicos de Pueblos Fumigados or Doctors from Pesticide-Sprayed Towns. The report is a real eye-opener, coming from people trained in medicine and closer to the region where this is all happening. They state explicitly that “dengue epidemic in Brazil persists endemically (on an ongoing basis)”, that “this poison (pyriproxyfen) is applied by the State on [in] drinking water used by the affected population” and that “previous Zika epidemics did not cause birth defects in newborns, despite infecting 75% of the population in those countries. Also, in other countries such as Colombia there are no records of microcephaly; however, there are plenty of Zika cases.”

Here are some other interesting quotes from the report:

“The pyriproxyfen being used (as recommended by WHO) is manufactured by Sumimoto Chemical, a Japanese subsidiary of Monsanto.”

“Brazilian doctors (Abrasco) are claiming that the strategy of chemical control is contaminating the environment as well as people, that it is not decreasing the amount of mosquitoes, and that this strategy is in fact a commercial manoeuvre from the chemical poisons industry, deeply integrated into Latin American ministries of health as well as WHO and PAHO.”

“Massive spreading using planes, as the governments of Mercosur are considering, is criminal, useless, and a political manoeuvre to simulate that actions are taken. The basis of the progress of the disease lies in inequality and poverty, and the best defence are community-based actions.”

“The last strategy deployed in Brazil, and which might be replicated in all our countries, is the use of GM mosquitoes —a total failure, except for the company supplying mosquitoes.”

Did you catch that? The pesticide pyriproxyfen is being manufactured by a Japanese subsidiary of MONSANTO! 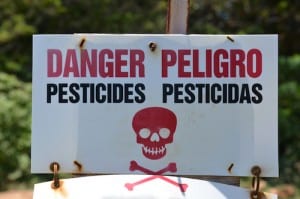 The first report above references this second report from a Brazilian group called Abrasco, translated as The Brazilian Association of Graduate Studies in Collective Health. Abrasco has been around for more than 35 years. It is a group of technicians, professionals, students and teachers associated with public health in Brazil. Similarly, their report, which is only roughly translated below, states:

“In 2014 a new larvicide pyriproxyfen was introduced in the drinking water of the population in households and public roads … This larvicide is a juvenile hormone analogue or juvenoid, with the mechanism of action of inhibiting the development of insect adult characteristics (e.g. wings, maturation of the reproductive organs and external genitalia), keeping with aspect immature (nymph or larva), that acts on endocrine disruption and is teratogenic and inhibits the formation of the adult insect.”

“The invisible hand of damage to the environment and human health arising from the use of chemicals in vector control has not been properly studied or revealed to vulnerable populations, including public health workers. Its harmful effects are totally disregarded both the worsening of viruses, and in the emergence of other diseases such as allergies, immunotoxicity, cancer, hormonal disorders and neurotoxicity among others.”

For example, the organophosphate insecticide temephos (commercially known as ABATE®), at 1%, was introduced in Brazil in 1968 as a larvicide in drinking water, especially in the North and Northeast of Brazil. Its impacts on people’s health has not been studied. We know that despite the fact that the mosquitos had resistance to it, it continued to be used until it ran out …  despite the abundant toxicological information about it concerning potential risks to human health.” 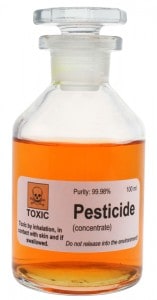 Pesticides are a type of poison. Why the hell are we spraying our food with them?

If these reports are true, it certainly verifies a lot of what know about the criminal way Big Biotech operates. The extent of Monsanto’s control over the US Government (to the point of dictating US foreign policy on GMOs) is widely known in the alternative media and beyond. Central and South America have long been vulnerable targets and markets for Big Biotech, to where it can export its toxic GMOs and pesticides. It would not be surprising to discover that Big Biotech had infiltrated the governments (and their health and agricultural agencies) in these nations just as it has in the US. It is also unsurprising that all the solutions to crises like this tend to be more of the same things that caused the initial problem, such as more pesticides, more GMOs (in this case GM mosquitoes) and more vaccines.

As I covered in the article Zika – Latest Actor in the Fake Pandemic Play?, the real cause of epidemics like microcephaly are hardly ever the sensational, Hollywood-like plot of a killer virus. As the report states, it’s much more often the banal and commonplace causes of inequality and poverty. Then, when you couple that with an increased level of environmental toxins – whether that be vaccines, GMOs, pesticides, chemicals in food or contaminants in the air and water – it makes it all the more difficult for people to fight back, since they barely have the resources (money, medicine, facilities, etc.) to do so. If the West really wanted to prevent or eliminate cases like this, it could. However, that’s not the way it works. When the “generous” West gives aid to other countries, it comes with strings attached, such as allowing its multinational corporations access to new markets.

“Want our foreign aid? Buy our products, let our multinationals buy your infrastructure and take over your markets … or it’s no deal.”

If nothing else, hopefully this whole zika fake pandemic story will open people’s eyes to the extent with which Big Biotech dominates the UN, WHO (the World Health Organization, a subset of the UN), the US and other governments of the world. Hopefully it will encourage people to further distrust these kind of “official authorities” who are corrupted by the influence of Big Biotech and Big Pharma, and who like to fearmonger because it makes better customers and more manageable citizens.

Hat tip and thanks to Claire Robinson of GMWatch for the initial report.