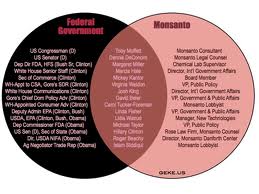 Monsanto agents like Hillary Clinton and Michael Taylor have infiltrated many parts of the US Government, such as the White House, FDA, USDA or EPA.

Monsanto forms part of the corporatocracy that really rules America and the world, not the puppet politicians we are led to believe hold the power. There are former and current Monsanto employees and agents everywhere in the US Government, from the White House to the Supreme Court. The graphic to the left shows some of them, but this is not a complete list; for instance, it does not include Clarence Thomas, the former Monsanto attorney, who is now one of nine judges on the Supreme Court, ruling on Monsanto cases! Conflict of interest anyone?

The latest example of Monsanto using its undue influence over the US Government comes from this article by Anthony Gucciardi of NaturalSociety.com. Monsanto has such a grip on the Federal Government that they have induced the United States to actually threaten countries who oppose Monsanto’s genetically modified (GM) crops with military-style trade wars! This information was made public by WikiLeaks, who do a fantastic job of exposing government corruption worldwide. Monsanto requested (or demanded) that nations such as France, which has attempted to ban one of Monsanto’s GM corn varieties, be penalized by the US for opposing Monsanto and GM food. This only proves just how deep Monsanto agents have infiltrated and overtaken critical positions within the US Government. Amazingly, these cables report that many US diplomats work directly for Monsanto, in blatant violation of their oath of office to uphold the Constitution.

Monsanto is threatening to destroy the world’s biodiversity, permanently alter and weaken humanity’s DNA and take control of the entire global food supply with its dangerous and toxic genetically modified food. The Monsanto influence over the US Government is out of control and must be stopped.

Previous Article
The US Defense Budget: A Bottomless Pit
Next Article
2012 Apocalypse – The Revealing of Humanity’s True Self