The Revolution of Freedom is Taking Place in Your Mind

The Revolution of Freedom is Taking Place in Your Mind 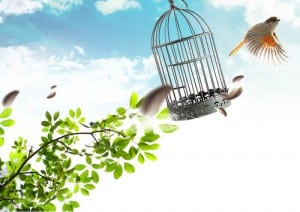 The revolution of freedom is already happening. It’s not a fake revolution like Obama’s hope & change. It aims to change the entire system.

The revolution of freedom

is happening. It’s well underway. It’s not a fake revolution like Obama’s “hope and change” pretense. It’s fueled by an awakening and a rising of consciousness that is earnestly dissolving old mental structures that no longer serve us. This rising consciousness, which is flowing and expressing itself through many people right now, is determined to stop looking to authority to fix things. It is determined to stop thinking that “respected institutions” like Government can help. It is determined to stop believing in collectivism, and instead honor the glory and uniqueness of every individual, without which the group could not exist. It is determined to stop believing that it can outsource its spirituality and morals to Organized Religion, its security to Government, its health to Big Pharma, its food to Big Agra and Big Biotech, its legal defense to the Law Society and its thinking to Mainstream Media. The revolution of freedom cannot be stopped. It will manifest in out world, but in order to do so, it will require the involved participation of awakened beings.

The revolution of freedom can only begin inside of you. We all have to take a look at ourselves and ask what mindsets, philosophies and mental biasses we carry, that have helped to create or perpetuate the current system we have – a system which is so blatantly over-centralized, corrupt and dysfunctional. For instance, how many of us still have a pro-authority bias? In other words, how many of us still think that the Government, which operates by coercion and monopoly, can justify its supposed political authority? How many of us still think the current system will work as long as we have a “good guy” or the “right person” as president who will magically fix everything? We know how unlikely it is that a person with principles can reach the presidency. We also know that they or their loved ones could easily be blackmailed and killed by the real power behind the throne if they tried anything too radical. In my recent article We Don’t Need a New President; We Need a New Consciousness and a New System, I looked at how so many people invest their time, money and energy into the circus that is the election cycle. Imagine if we put some of that energy into a better and freer system … 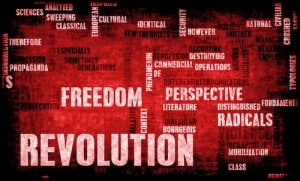 The revolution of freedom is in your mind.

Larken Rose: Ignore the Existing System and It Will Fall into Irrelevance

In a recent interview (embedded above) with Luke Rudkowski of We Are Change, activist, anarchist and freedom philosopher Larken Rose gives an excellent summary of how we are already transitioning from centralized authoritarianism to decentralized liberty in a revolution of freedom. It’s a principle that that has been oft repeated. Suppose They Gave a War and Nobody Came (old film). The pioneers of the warless world are the youth who refuse military service (Einstein). To change something, build a new model that makes the existing one obsolete (Buckminster Fuller).

One by one, step by step, as we start following our conscience, heart and morals, rather than external law, we can ignore politicians and their often ridiculous rules and regulations. Once enough people refuse to recognize their authority, the system will become irrelevant and disappear of its own accord. As Larken says:

“The Donald Trump phenomenon doesn’t matter … it’s an absolutely irrelevant glitch … what matters is the underlying philosophy of people, and there are way more people understanding concepts of self-ownership and non-aggression … than they were just a few short years ago.

In the end, what determines it is what the people think and believe, and that is changing in the right direction …

We’ll have the political solution when no one pays attention to politics. Ultimately, when enough people in believe in freedom, you can literally ignore an Empire out of existence. We ignore your laws, we ignore your taxes, we don’t care what you think … I own myself, my neighbor owns himself, and we get along like adult human beings.

However many different ways you can find to live your life in a way that the politicians don’t matter, and have nothing to do with you – that is the road to freedom.” 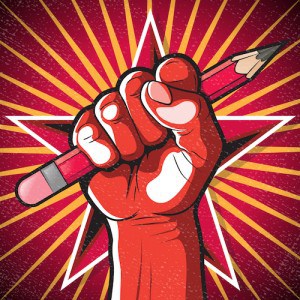 Time to rise up and create a peaceful revolution of freedom – a world with no rulers and no slaves.

Revolution of Freedom: No More Representatives

Voting is a meaningless exercise when all the candidates are virtually identical on key policies and positions. Voting is a lazy man’s way of trying to claim you are participating in the system. It’s time we stopped indulging in this useless ritual (especially on a State or Federal level). It’s time we stopped needing so many representatives (or any kind, political or otherwise) to “represent” us. It’s time to stop looking outside of ourselves for solutions. It’s time we stopped begging for permission to do things by privilege and just went ahead and did them by natural, intrinsic, unalienable right. Ultimately the responsibility is for everyone to educate themselves and exercise that knowledge in their lives.

We need a revolution of freedom in terms of how we look at freedom, political authority and government. We want a world with no rulers and no slaves. The problem – and the solution – are mostly in our minds.

Getting the Idea of Government & Political Authority Out of Your Mind