Venezuelan Economic Crisis: The Real Cause is Not Socialism

Venezuelan Economic Crisis: The Real Cause is Not Socialism 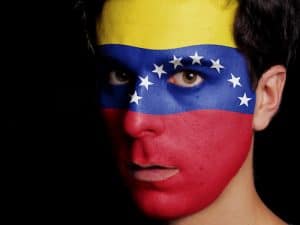 The Venezuelan Economic Crisis: it’s easy to blame socialism or corruption, but find out what the real cause is – and how Venezuela is being subverted.

You may have heard that Venezuelan economic crisis

is being caused by the evils of socialism. Many articles in both the Alternative and Mainstream Media are quick to judge the Venezuelan economic crisis without a deeper investigation. Yes, here at The Freedom Articles we are opposed to socialism since it is a form of collectivism which places more value on the needs of the abstract group than the needs of the individual, and carries out the forced redistribution of wealth through taxation (which basically equates to the systemized theft of one part of society to, in theory, help another). However, many systems of government (not just socialism) do exactly the same thing, no matter whether they are “left” or “right”. Besides, the chief cause of Venezuela’s ills has little do with its economic system, which is not purely socialist but rather a mixture of 3 aspects (communal, state and private). The problem is that it continues to be targeted from the outside – by the USA, who is taking active steps on many fronts to subvert the existing government and install US-friendly puppets instead. It’s the same old game of regime change which the US has been orchestrating literally all over the world since the end of WWII.

Venezuela has over 298 billion barrels of proven oil reserves, the largest recognized volume in the world. According to the 2016 figures from the US EIA (Energy Information Administration), the US imports 800,000 barrels of oil per day from Venezuela. Getting oil from a South or Central American nation is less risky and much faster for the US than transporting it from the dangerous and war-stricken Middle East. However, it does not sit well with the US that a nation in South America (the backyard of its Empire) like Venezuela can prosper as a sovereign socialist republic. The US and its multinational corporations want a big slice of the pie of the gasoline profits, which Venezuela under Chavez and Maduro have refused to give. As self-confessed economic hitman John Perkins described decades ago in books, presentations and interviews, when a “recalcitrant” nation fails to play ball with the US, it activates its various branches to rein them in – the intelligence agencies, the NGOs, the “jackals” (assassins) and, if all else fails, then the US military itself.

I have covered in previous articles (such as NGOs: Choice Tool of Subversion for the New World Order) the dangers of the soft power complex of US NGOs, also called the non-profit industrial complex. Guess what? The NGO network is at it again when it comes to the Venezuelan economic crisis. This time, they are actively subverting the Maduro government by funding and arming the opposition. Peter Koenig writes the following in his article Why is Venezuela in the White House’s Crosshairs? Confronting The Neoliberal Propaganda Media Machine. Koenig actually heard firsthand the Venezuelan Ambassador to Switzerland speak to an audience:

“On 8 of June, I had the privilege to attend a press conference hosted by the Venezuelan Ambassador in Bern, Switzerland. The purpose of the press conference was to clarify the current highly misrepresented situation in Venezuela … The facts explained and demonstrated by the Ambassador showed clearly who was responsible for most of the 67 deaths and more than 1,200 injured within the last couple of months … This point of opposition violence, blackmail and more, is clearly demonstrated by a recent US journalist covering the riots for the pan-Latin American TeleSur TV. Ms. Abby Martin, the host of the Empire Files, an investigative program, told RT (Russia Today) that she received numerous death threats from opposition fighters during her work on the ground in Venezuela. She says protesters threatened to lynch and burn her alive if she tried to contradict their narrative.

The fact that the opposition is planning to boycott the election shows clearly, they are not interested in democracy. They have one goal only, to oust President Maduro and take power, privatize state assets, especially hydrocarbons (petroleum and gas) to hand them to international mainly US corporations to be exploited at no benefits for the Venezuelan people. This was precisely the case before President Chavez took the reins of the country. Foreign corporations, almost all North Americans, left not a dollar in tax revenues in Venezuela.” 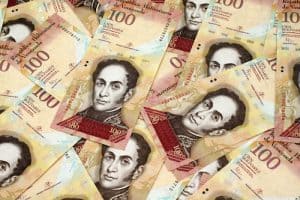 The clues are there if you look with care. The Venezuelan economic crisis has been basically predicted and advocated by the Brookings Institute. As Tony Cartalucci points out in his article US Policymakers Openly Plot Against Venezuela, the Brookings website features an article Venezuela: A path out of crisis which recommends a 5-point destabilization plan:

“The United States could increase monetary assistance to credible civil society organizations and nongovernmental organizations able to deliver food and medicines to Venezuelans … The United States could support efforts by the opposition in Venezuela to build an “off-ramp” that would split moderate elements of the government away from hardliners, encouraging the former to acquiesce to a transition to democracy …”

If you run this through the Orwellian translation unit, it means use the soft power complex of NGOs to overthrow Maduro and orchestrate regime change.

“The United States could coordinate with international institutions such as the International Monetary Fund (IMF) to offer financial incentives for holding free and fair elections in 2018, and for the opposition to unify and compete in those elections. Such coordination would also involve developing and publicizing a credible plan to restart Venezuela’s economy.”

Also unsurprisingly, the NED (National Endowment for Democracy), a notorious George Soros-funded NGO, has been involved.  The so-called Venezuelan opposition is made up of “US-backed political parties and US-funded fronts posing as nongovernmental organizations (NGOs) many of which are listed on the US State Department’s National Endowment for Democracy (NED) website“ as Cartalucci writes.

Formerly on RT, and current Empire Files host Abby Martin, returned from Venezuela in June 2017. She gave a firsthand account of how the Venezuelan opposition were attempting to intimidate reporters so as to control the narrative and give a false impression of what was happening. 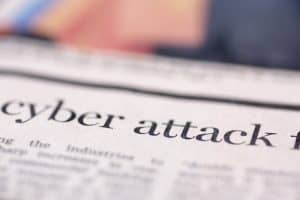 Another aspect to the US attack on Venezuela is coming out of Miami, Florida, in the form of a website called DolarToday which, according to Venezuelan President Maduro, is an attempt to sabotage the Venezuelan bolivar:

“The DolarToday website has been denounced by the Venezuelan State for setting a parallel dollar artificial price marker (black market). It has also been the target of a lawsuit by the Central Bank of Venezuela for falsifying the country’s exchange rates. In 2013, President Maduro accused the website of “fueling an economic war against his government, and manipulating the exchange rate.”

“DolarToday is also promoting opposition protests in Venezuela. Its tweets are being boosted by automated accounts that exhibit repetitive, bot-like characteristics and are using a social media management tool called IFTTT (If This Then That) to automate their tweets”, says Erin Gallagher.

“What immediately caught my attention in the #TeamHDP hashtag data were the shared networks between the influencers (real persons of high credibility),” explained the specialist.”

In the video embedded above, Abby interviewed the Venezuelan Minister of Economic Planning, Ricardo Menéndez. He elaborates on the deliberate US attack on the Venezuelan currency:

“We are the victims of an attack to the Bolivar, the national currency. This charge against our currency has become evident on certain websites based outside Venezuela, where fictitiously, without any rationale or economic proof to back it up, they determine a political value of our currency. With this political value, they pretend to generate the cost structure … 70% of the inflation in Venezuela  is related to the American dollar rating being effectively made both in Miami and Cucuta. Afterwards, the extraction of paperer currency. This means, actually taking Bolivars out of the borders of Venezuela, in order to generate a drought, affecting the ability of Venezuelans to pay in cash.”

He later remarks how food supplies and the state of the economy are used as a political weapon to disturb the Venezuelan psyche and unseat the government. 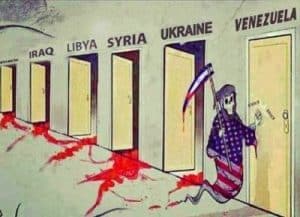 The truth is that the Venezuelan economic crisis is all about regime change, which itself is all about the Anglo-American-Zionist New World Order expanding its economic and military empire to turn all other nations into vassal states. The most recent bill in Congress earmarks $9,500,000 for (cough cough) “democracy promoting activities” for Venezuela. If you don’t realize what that means by now, take a look at the US-installed Neo-Nazis in Ukraine who were brought into power with NGOs in line with the regime change agenda. Funny how this regime change agenda is always window dressed with the rhetoric of human rights and democracy promotion.

The US has a long history of regime change in South America, a famous example of which is the 1973 CIA coup in Chile which brought military dictator Pinochet to power. As Kevin Zeese and Margaret Flowers note, “there is a long-term ongoing coup campaign in Venezuela, with its most recent episode last week in which a helicopter attack on the Supreme Court was tied to the US DEA and CIA. The US has allied with oligarchs, supported violent protests and provided funds for the opposition, which has also worked to undermine the Venezuelan economy …”.

It’s time we went beyond blaming Venezuelan socialism or corruption for what is going on, and realized that US sanctions, economic sabotage and political subversion are the real reason for the Venezuelan economic crisis.