Iraq to Neocons: Get the Hell Out of Our Country

Iraq to Neocons: Get the Hell Out of Our Country 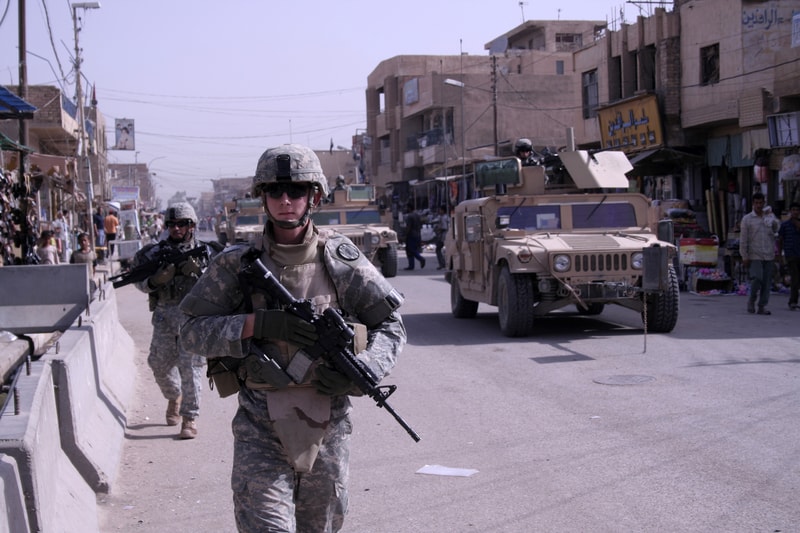 Iraq to Neocons: get out! The neocon USG is spinning the Iraq embassy attack to fit their agenda (blaming Iran) when it’s clear the Iraqis are tired of indefinite US occupation.

The Trump coterie of neocons is spinning the Iraq embassy attack to fit their agenda, namely that Iran is responsible for the rocket attack when it is obvious the people of Iraq are fed-up with the US occupation, designed to last indefinitely, and are now targeting the massive US embassy in Baghdad.

Today, Jan. 26, 2020
The terrorist group called hashad alshabi in Iraq under the supprt of Islamic Terrorist Regime in Iran, attacked US Embassy in Baghdad with 5 misseles. What would be the next.? pic.twitter.com/0ntgXgyMQw

It’s apparent where this guy’s sentiment lies. He’s one of those exiled Iranians, a distinct minority, that pine for the old days under the Shah and his sadistic secret political police, SAVAK.

But maybe I’m wrong. Maybe he’s one of those MEK zombies. There is a number of exiled Iranians lined up, hopeful they will take over after the neocons and Israel bomb the hell out of Iran and hang the mullahs like they did Saddam Hussein, through a proxy, of course. That’s the plan, essentially. It’s relatively easy to figure out what these Israel-firsters will do if you understand their criminal history.

The Popular Mobilization Forces (PMF) units in Iraq are integrated into the Iraqi government by a decree issued on behalf of Prime Minister Adil Abdul-Mahdi. It has played a decisive role in defeating the Islamic State, the terror organization supposedly established by Jordanian Salafi jihadist (in other words, Saudi Wahhabi) Abu Musab al-Zarqawi. Never mentioned is the fact al-Zarqawi was elevated to superhuman status under a Pentagon psychological operation. The Zarqawi myth was required to demonize the Iraqi resistance to USG occupation its and ongoing terror operations, for instance the destruction of Fallujah.

Like Hezbollah in Lebanon, the PMF is a Shia militia that was incorporated into the Iraqi military structure and government.  Kata’ib Hezbollah is an integral part of this coalition—at the forefront of resisting USG occupation. Abu Mahdi al-Muhandis, the group’s commander, paid for this effort with his life when the USG assassinated him with a Hellfire missile along with Iranian Major General Qasem Soleimani.

PMF commander Hashd al-Shaabi is at the front of the renewed effort to get the USG out of the country. He may be the next one to be blown to smithereens by a USG missile.

In a sane, non-neocon influenced world, the US would heed the demands of the Iraqis and begin the process of leaving the country, as Trump promised (never believe the promises of a narcissist). Unfortunately, we don’t live in a sane and rational world. We live a world dominated by psychopaths, sadists, pedophiles, and control freaks.

Trump said recently the USG will not leave Iraq until it pays for the Balad military base, formerly the Al-Bakr Air Base. The largest airbase in Iraq, it was stolen during Bush’s illegal invasion. It was expanded by the USG and now has a movie theater, and a number of corporate operations, including Subway, Popeyes, Pizza Hut, Taco Bell, Burger King, Green Beans Coffee, a Turkish Cafe, and an Iraqi Bazaar. Balad has multiple gyms, dance lessons, an Olympic size swimming pool, and an indoor swimming pool. Balad also was where celebrities touched down when they entertained the occupiers. Charlie Daniels, Wayne Newton, Gary Sinise, Carrie Underwood, and others entertained USG troops in their off-time from the task of destroying Iraq and turning it into an airstrip for further operations in the Middle East.

The Iraqi parliament voted to expel USG troops but the Pentagon said it’s not going anywhere, thus the response was predictable—rockets aimed at the USG embassy and striking the facility’s cafeteria, reportedly injuring a single person. Of course, like the Iranian ballistic missile attack on the Ayn al-Asad airbase in al-Anbar Governorate in Western Iraq, and an airbase in Erbil, located in Iraqi Kurdistan, we can expect the USG to lie about causalities.

Breaking News: 34 American troops suffered traumatic brain injuries after Iran’s strikes on a U.S. base in Iraq this month, the Pentagon said. President Trump had dismissed them as “headaches.” https://t.co/rIophms6jh

Iraqis have all the right in the world to attack foreign soldiers illegally occupying their country. No matter how hard the corporate war propaganda media spins the attack on the USG embassy, the conclusion is obvious—this is the beginning of a concerted effort to get the USG out of the country. It is, to say the least, a pernicious influence and the “exceptional nation” is responsible for the death of well over a million Iraqis, for which it has yet to be held to account. The war propaganda media may characterize this attack as Iranian hostility but in fact it is a justified response on the part of Iraqis. If the Iraqis invaded and occupied St. Louis, would we expect the response to be any different?

The USG was tipped off by the Iraqi government the attack on its illegal military bases was coming and I suspect the Trump neocons knew beforehand the embassy would be attacked. Instead of throwing up red flags and evacuating the embassy, they let it happen for the simple reason it would further demonize Iran. The idea here is to blame Iran for any attempt by the Iraqis to evict the USG.

Just how accurate were the Iranian missiles that hit the part of the Iraqi airbase where U.S. troops were stationed? It turns they scored 6 direct hits. Iran was clearly demonstrating capabilities that completely change the nature of a US war with Iran. https://t.co/9aYlaDrLl0

As for the embassy attack, which Kata’ib Hezbollah denies it is responsible for, is it too far out in left field to speculate this was covertly carried out by the USG to distract from mass demonstrations demanding USG departure. It also may be used to increase the presence of USG and “coalition” troops now that the Iraqi people are mobilized—and paying with their lives, as the Iraqi government has no aversion to opening fire with live ammo on their own people when they protest against what is obviously meant to be a permanent stationing of troops.

#NATO members are aiming to boost the number of training and military advisory personnel at the mission in #Iraq in response to President Trump’s call for the alliance to do more in the Middle East https://t.co/oiQEB35ehN via @WSJ