“And so it is to the printing press – to the recorder of man's deeds, the keeper of his conscience ...
confident that with your help man will be what he was born to be: free and independent.”

Turkey in Syria: Down a Blind Alley in an Unwinnable War?

Turkey in Syria: Down a Blind Alley in an Unwinnable War?

Turkey in Syria is a dead end.

Fighting in northern Syria has escalated as Syrian forces retake the last remaining bastions of foreign-funded militants and encircle, cut-off, and in some cases catch in the crossfire their Turkish backers. Turkey had been making some promising steps in the right direction since Washington’s disastrous proxy regime-change war in Syria began unraveling – yet it still maintains a problematic position inside Syrian territory, backing what are unequivocally terrorists and obstructing Syria’s sovereign right to recover and restore order within its own borders. The latest and most dangerous manifestation of this untenable policy is the increasingly frequent and fierce clashes between Turkish forces occupying Syrian territory and Syrian forces themselves moving deeper into the northern Syrian governorate of Idlib.

The BBC in its article, “Syria war: Turkey will not let Syrian army advance in Idlib, says Erdogan,” would summarize the Turkish position amid recent hostilities, reporting:

Mr Erdogan told reporters that Russian-backed pro-government forces were “driving innocent and grieving people in Idlib towards our borders”.

More than half a million civilians have fled their homes since the government launched an offensive in December.

Indeed – hostilities in Idlib will undoubtedly drive fleeing militants and their families toward the Syrian-Turkish border and inevitably compound Turkey’s already large refugee problem. Yet this is not Syria’s doing, nor that of Syria’s Russian and Iranian allies. It is the doing of malign US foreign policy that Turkey had initially played a key role in facilitating – and at times still appears to be eagerly abetting.

The refugee crisis in Turkey itself was cynically used several times in the past by Ankara and its Western allies at the time for political leverage in demonizing Damascus and to justify more direct Western intervention against Syria.

But pursuing genuine peace was and still is the obvious solution to the refugee crisis – a solution Turkey has so far refused to fully commit to. Along with Turkey’s most recent attempt to cite the refugee crisis to justify its military presence in Syria is the Western media which is attempting to reuse years of propaganda to vilify Damascus and its allies, hoping to hinder security operations and drag out hostilities further.

Ironically and unfortunately – such attempts to hide behind humanitarian concern, protracting hostilities – will lead only to more loss of life.

Holding up the refugee crisis as an excuse to continue occupying Syrian territory and expand what is now becoming direct Turkish hostilities against Syrian forces will do little to justify Turkey’s current policy regarding Syria. It will also do little to improve the prospects of what are essentially unachievable objectives for the Turkish government and military – including maintaining its occupation of Syrian territory and its backing of militants operating there.

Turkish Forces Will Leave Syria – One Way or Another

Turkish troops will not be able to remain indefinitely in Syria. Their proxies will eventually be liquidated and the positions of Turkish forces surrounded by Syrian forces. In many areas of Idlib this is already the case. Additional Turkish troops and supplies fed into losing battles and what is ultimately a lost war will only delay the inevitable undoing of Turkish interests in Syria.

Ankara could – on the other hand – begin aligning its policies with the reality of what is happening in Idlib and expand its cooperation with Russia and Iran regarding the Syrian conflict – incrementally withdrawing support from militant groups, encouraging them to disarm and surrender, and gradually handing over Turkish positions within Syria to the actual military, government, and people of Syria.

It is likely that Ankara realizes its position in Syria is untenable and is instead using the prospect of a painful and drawn-out conflict resulting from its refusal to withdraw as a bargaining chip to extract concessions from Damascus and its allies. Recent hostilities might also be an attempt to bluff Damascus in a bid to prevent further Turkish positions from being absorbed by Syria’s moving front line in Idlib.

Ultimately – Turkey’s decisions in the days, weeks, and months ahead – will further define the nation as it is perceived globally as its decades-long ties and subordinate role to the West fades and it forges a new position upon the global stage. 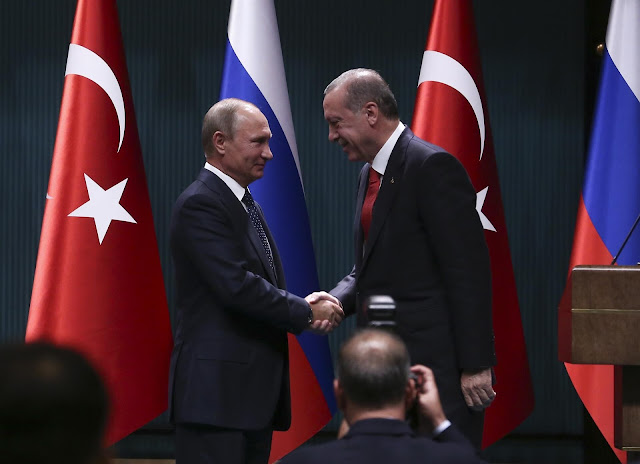 The malicious use of its lingering presence in northern Syria – a leftover of its complicity in the US-engineered proxy war that created the current conflict in the first place – would be unfortunate and would reflect poorly on Ankara and negatively impact its future international relations. It will impact not only its ties with the principal actors in the current Syrian conflict – but also its ties around the globe as nations seek to diversify away from aging and ill-intentioned hegemonies and toward nations of good faith.

Turkey faces a juncture where it must decide if it will move forward into the future with its increasing independence from the United States and NATO – but maintain the same style of malign statecraft as its Western allies – or find a constructive role to play among an emerging multipolar world.

Shelling and bombing Syrian forces inside Syrian territory is a poor start. It sets Turkey down another blind alley in terms of regional policy – making it more difficult for Syria and its allies to accommodate Turkey in any sort of constructive manner in a post-war regional architecture that will certainly favor Damascus and its allies. It will also complicate trust in the future should Turkey eventually accept this emerging architecture and seek to benefit from or contribute toward it.

Ankara has already come a long way from its initial support for US regime-change since the beginning of the Syrian conflict in 2011 to helping – even if sometimes reluctantly – end the deadly, protracted fighting in recent years. Only time will tell if Ankara will continue in this positive direction – meaning this recent confrontation in Syria is merely a temporary setback – or if Ankara is determined to cling to its increasingly untenable position in Syria at the cost of a risky conflict it will ultimately lose.