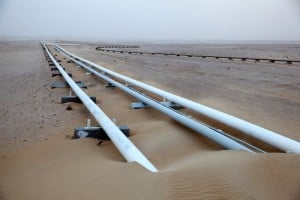 The Syria War is being fought for two major reasons: geopolitics and geopipelines. Assad was targeted before the Syria War officially began, as he supported the “wrong” pipeline.

The Syria War is being fought

for two major reasons, plus a host of minor ones. There are always many layers to the truth, just as there are always many layers to the motivations of individuals and nations. In earlier articles I have focused on the geopolitics surrounding the Syria War. The now permanent war in Syria is part of the wider regional Middle Eastern war, which has already taken out countries like Iraq, Somalia, Sudan and Libya and brought them under the heel of US-led NATO. Syria is part of the broader encirclement of Russia and China, and a possible stepping stone to World War 3. However, there is another key aspect: pipelines. The Syria War is also being fought over energy (oil and gas) to see whether the Iran-Iraq-Syria pipeline (the “Islamic Pipeline”) or the Qatar-Saudi Arabia-Jordan-Syria-Turkey pipeline (the “Qatar-Turkey Pipeline”) pipeline will succeed. The Syria War is mostly about geopolitics and geopipelines – exactly in line with the Wolfowitz Doctrine and Brzezinski’s The Grand Chessboard which unabashedly promote US encirclement of Russia and China, and US domination of Eurasia (home to most of the world’s resources).

So many times in recent history have we seen nations like the US and UK go to war over oil. This conflict is no exception. Pepe Escobar coined the word pipelineistan to describe the imperial 21st century energy wars which occur in the Middle East. In his article Syria: Ultimate Pipelineistan War, he describes how the US opposed the Islamic Pipeline from the start, instead backing the Qatar-Turkey Pipeline. This was for 2 main reasons: firstly, because the US is close allies with Saudi Arabia and its GCC buddies, all of whom are happy to continue to trade oil for US dollars and uphold the petrodollar system; secondly, because Iran has been painted as the bad guy and the new enemy, and the US does not want Iran trading too much with Europe (where the oil would flow after Syria) and becoming stronger. In February, Iran already made a concrete step away from the petrodollar by trading its oil for euros.

Syria is a pawn in a bigger game that the US is playing, to ultimately dominate Iran, Russia and China. As Escobar writes:

“So, in the Big Picture, from Washington’s point of view, what matters most of all, once again, is «isolating» Iran from Europe. Washington’s game is to privilege Qatar as a source, not Iran, and Turkey as the hub, for the EU to diversify from Gazprom.” 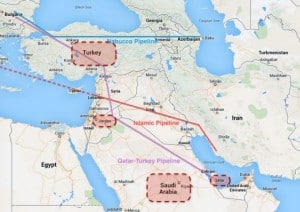 The Syria war is being fought over pipelines. Image credit: ZeroHedge.com via MintPress News

US History of Intervention in Syria

For a deeper understanding of the Syria War today, take a glance at the US history of intervention in Syria. Some readers may be familiar with Allen Dulles, a man with all the characteristics of a full-blown psychopath. He was the key mastermind of the JFK assassination. He became CIA director in 1953, and, set loose by President Eisenhower, spearheaded the newly created “intelligence” agency which was just about to make a name for itself as the most dangerous assassinator, overthrower, coup generator, weapon runner and drug runner in the history of the world. The CIA overthrew the democratically elected president of Iran (Mosaddegh in Operation Ajax) and installed a puppet dictator, Shah Reza Pahlavi, who favored US and UK oil companies.

The current Syria War which began in 2011 is nothing new. Syria has been dealing with the CIA, US oil ambitions, coups, governmental overthrows, puppet dictators, pipelines and energy wars since at least 1949! Robert F. Kennedy Jr. (nephew of JFK) summarizes it all very well in his article Syria: Another Pipeline War:

“The CIA began its active meddling in Syria in 1949—barely a year after the agency’s creation. Syrian patriots had declared war on the Nazis, expelled their Vichy French colonial rulers and crafted a fragile secularist democracy based on the American model. But in March of 1949, Syria’s democratically elected president, Shukri-al-Kuwaiti, hesitated to approve the Trans Arabian Pipeline, an American project intended to connect the oil fields of Saudi Arabia to the ports of Lebanon via Syria. In his book, Legacy of Ashes, CIA historian Tim Weiner recounts that in retaliation, the CIA engineered a coup, replacing al-Kuwaiti with the CIA’s handpicked dictator, a convicted swindler named Husni al-Za’im. Al-Za’im barely had time to dissolve parliament and approve the American pipeline before his countrymen deposed him, 14 weeks into his regime.”

The Syrian people managed to get rid of that dictator, but CIA struck again in 1956. Dulles sent in the 2 men responsible for Operation Ajax (Kim Roosevelt and Rocky Stone) to try the same thing in Syria:

“Flush from his Operation Ajax “success” in Iran, Stone arrived in Damascus in April 1956 with $3 million in Syrian pounds to arm and incite Islamic militants and to bribe Syrian military officers and politicians to overthrow al-Kuwaiti’s democratically elected secularist regime. Working with the Muslim Brotherhood, Stone schemed to assassinate Syria’s Chief of Intelligence, its Chief of the General Staff and the Chief of the Communist Party … The CIA’s plan was to destabilize the Syrian government, and create a pretext for an invasion by Iraq and Jordan, whose governments were already under CIA control.

But all that CIA money failed to corrupt the Syrian military officers. The soldiers reported the CIA’s bribery attempts to the Ba’athist regime. In response, the Syrian army invaded the American Embassy taking Stone prisoner. Following harsh interrogation, Stone made a televised confession to his roles in the Iranian coup and the CIA’s aborted attempt to overthrow Syria’s legitimate government. The Syrians ejected Stone and two U.S. Embassy staffers—the first time any American State Department diplomat was barred from an Arab country.

Even after its expulsion, the CIA continued its secret efforts to topple Syria’s democratically elected Ba’athist government. The CIA plotted with Britain’s MI6 to form a “Free Syria Committee” and armed the Muslim Brotherhood to assassinate three Syrian government officials, who had helped expose “the American plot.” (Matthew Jones in The ‘Preferred Plan’: The Anglo-American Working Group Report on Covert Action in Syria, 1957). The CIA’s mischief pushed Syria even further away from the U.S. and into prolonged alliances with Russia and Egypt.”

Talk about blowback. Syria has been dealing with the mendacity and treachery of the US and its CIA for 67 years! Wouldn’t you be sick of it if you were in their shoes? 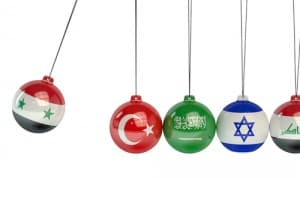 Syria is being pushed around by Turkey, Saudi Arabia and Israel to accept their pipeline.

Start of the Syria War in 2009, When Assad Supported the “Wrong” Pipeline

Bashar Al-Assad, President of Syria, supported the “wrong” pipeline (from the US-Saudi-Israeli perspective). Julian Assange of Wikileaks recently declared that he had seen secret cables and reports by the US, Saudi and Israeli intelligence agencies which showed evidence they were moving to overthrow Assad as soon as he indicated he would not support the Qatar-Turkey pipeline. The CIA began funding opposition groups in Syria in 2009, 2 years before the Syria War officially began.

Saudi Arabia has been so aggressive in pushing forward its agenda that it even offered to fund the US for its entire bill in carrying out the Syria War! As Kennedy writes:

“On Sept. 4, 2013, Secretary of State John Kerry told a congressional hearing that the Sunni kingdoms had offered to foot the bill for a US. invasion of Syria to oust Bashar al-Assad. “In fact, some of them have said that if the United States is prepared to go do the whole thing, the way we’ve done it previously in other places [Iraq], they’ll carry the cost,” he stated. Kerry reiterated the offer to Rep. Ileana Ros-Lehtinen (R-FL27): “With respect to Arab countries offering to bear the costs of [an American invasion] to topple Assad, the answer is profoundly Yes, they have. The offer is on the table.””

Finally, it is also noteworthy that when US-controlled ISIS came on to the stage, they occupied the exact regions of Syria where the proposed Qatar-Turkey pipeline would go …

The Syria War is a Foreign War, Not a Civil War

Although the Syria War is yet another war being fought over oil, gas and geopolitical significance, it is unique in some regards. The sheer amount of foreign meddling and manipulating is without precedent. With the US, UK, France, Germany, Israel, Saudi Arabia, Turkey, Lebanon / Hezbollah, Iraq, Iran, China and Russia all involved in one way or another, the Syria War has never been a civil war. It has always been about the West (the US-UK-Israeli axis) trying to remove Assad from power. First, they tried to claim they needed to conduct a humanitarian intervention (note the Orwellian oxymoron) in line with the UN’s R2P or Responsibility to Protect. When that didn’t work, they created the Frankenstein ISIS and tried to claim they needed to invade Syria and removed Assad to stop ISIS. Luckily many people have seen through those blatant lies.

The Syria War has always been about geopolitics and geopipelines. As Escobar writes:

“What’s certain is that, geo-economically, Syria goes way beyond a civil war; it’s a vicious Pipelineistan power play in a dizzying complex chessboard where the Big Prize will represent a major win in the 21st century energy wars.”