We Have the Peak Oil Myth; Now Peak Water, Too?

We Have the Peak Oil Myth; Now Peak Water, Too? 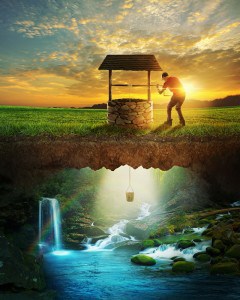 Peak water, like peak oil, is a myth. Primary water exists in abundance under the Earth’s crust.

Peak Water is the idea that,

like peak oil, water is a limited resource that we are running out of. The water crisis occurring in California (and elsewhere) is a water crisis hoax in the sense that we are being conditioned to accept artificial scarcity as real scarcity. Artificial scarcity is an age-old trick used by merchants to suppress the supply of a resource or product in order to increase its price. This financial trick is especially noticeable in the oil industry (controlled by the usual New World Order elite families). The Rockefellers propagated the peak oil myth at the Geneva Convention in 1892. John D. Rockefeller used his paid scientists to contend that as oil is composed of hydrogen, carbon and oxygen, it must be a residue from living matter, and thus it is a fossil fuel! Twisted logic indeed. The Russians discovered that oil was abiotic decades ago. Oil is normally drilled at 30,000 feet, whereas real fossils are normally not found below 16,000 feet; the whole thing is a scam. Now, new information brought forth by researcher Deborah Tavares of StoptheCrime.net suggests may well be looking at another fable – this time “peak water”.

Nefarious war criminal Henry Kissinger stated that to control nations, you control oil, and to control people, you control food. He might have added that to control Life itself, you control water, because there is barely any life on Earth as we know it that could survive without water. Many have predicted that the wars of the 21st century will be fought over water, not oil or other subterranean resources. There is good evidence that part of the reason Gaddafi was taken out was because he was so successful in constructing an amazing aquifer system to adequately hydrate the people of Libya. And, we know from researchers such as Dane Wigington that satellite images show geoengineering chemtrails all over California and its coasts. He theorizes the geoengineering of the Pacific is causing the Californian drought.

So, at one level of the game, water is a resource that is practically limited, and is already being fought over with powerful weapons, both admitted (military bombs and weapons) and mostly unadmitted (HAARP and geoengineering) ones. But what if this is all a cover? What if there is an unlimited supply of pure water that could easily be tapped that the Controllers are not telling us about? 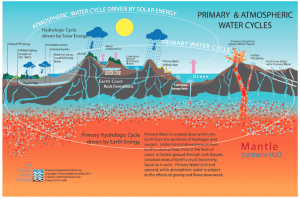 As this diagram shows, peak water is myth due to the existence of primary water from the Earth’s mantle.

The people at the Primary Water Institute say there is just such a thing – primary water. It’s the water just below the Earth’s crust, in the mantle. It is not the water you think of as ground water. It is not part of the normal hydrologic cycle of evaporation and condensation, which they classify as a secondary cycle. Listen as Deboarah Tavares interviews Paul Power who explains the concept of primary water. The illustration above also shows it. The existence of primary water clearly busts the idea of peak water, and shows that we are being lied to yet again by Big Government and the mainstream media about matters of vital importance to our lives.

What’s the Point of the Peak Water / Water Crisis Hoax?

The water crisis hoax fits right in to the UN Agenda 21 plan for global domination. By engineering a drought and pretending there are no viable solutions, the Controllers will drive people off their land and out of their homes in search of wetter areas. This facilitates a land grab and allows Government and corporations to seize more land (either for free or dirt cheap), and pressures people to move into big megalopolises where, in alignment with Agenda 21, they will have to live in shoebox-sized apartments – to save the environment, of course.

Meanwhile, by very real means such as a combination of HAARP and geoengineering, the Government is creating massive food shortages (since such a high percentage of many crops are grown in California), causing stress of lower and middle income individuals and families who are faced with rising food costs and potentially even a lack of food.

Previous Article
Transhumanism: Will This Be How Humanity Destroys Itself?
Next Article
Obama: Hiding Truth in Plain Sight