Transhumanism: Will This Be How Humanity Destroys Itself?

Transhumanism: Will This Be How Humanity Destroys Itself? 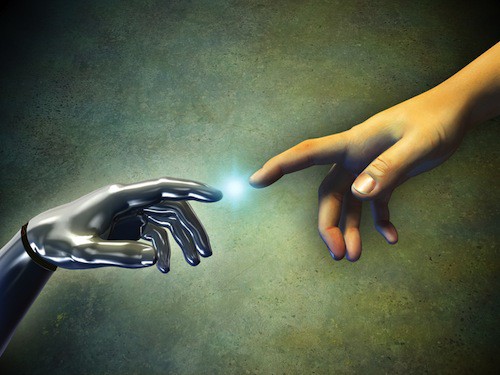 Transhumanism is promising eternity, but it may be the way humanity destroys itself by sacrificing everything that makes us human.

is the intentional merging of man with machine. It the movement to augment or enhance humanity by melding synthetic, machine-like parts to the human body. It is driven to make man more precise, logical, analytic and knowledgeable – by making man more robotic. Transhumanism is a highly dangerous movement that reminds me of a little kid playing with fire. We have no idea where this is going to take us, yet we race blindly on, believing that if we can, we must. That’s the maxim of misguided science: if we can do it, we will do it, no matter what. No matter if millions of people die from an atomic bomb. Many authors, film directors, artists and visionaries have foreseen and warned about the danger of an AI (Artificial Intelligence) system that becomes self-aware, decides it doesn’t want humans to live and kills them all. So we need to ask ourselves: will transhumanism be how humanity destroys itself?

Plug Yourself Into a Supercomputer and Become a God

Transhumanism is selling the idea that you can plug yourself into a supercomputer and become all-powerful, all-knowing, immortal – a god. It’s promoting the idea that humanity can have a future without death.

A Second Bite of the Apple

The situation reminds me of the Garden of Eden. Now, I am not a Christian (I think almost all religions contain some truth but have gotten bogged down in a ton of dogma), however I do think the Garden of Eden is a highly symbolic story. Traditional Christianity interprets the story as proof of man’s sinful nature, and to some extent uses it to justify judgement and punishment of those who are curious and seek knowledge. However I think a more profound understanding is that the ejection of Adam and Eve from the Garden of Eden symbolizes mankind’s fall into a lower state of consciousness. We used to live in a time where we felt and experienced our divine nature more, where we felt more connected to each other, to Nature and to the Earth, but we have descended into more separation. And, deep down, all of us feel the tremendous pain and suffering in that separation.

What makes transhumanism so scary is that it is like trying to take a second bite of the apple. It is trying desperately to return to that state of higher consciousness, to make up for the disconnection, but in doing so, it is pushing us further away from Who We Really Are. People are trying to overcome the primal pain of disconnection by voluntarily chipping themselves, as though that would restore connection, but all it’s doing is denying our own humanity and making us more robotic.

Will Transhumanism Create Heaven or Hell?

To believe Heaven and Hell are literal places you go to after you die, full of milk and honey or fire and brimstone, is a very shallow and limited way of understanding those concepts. A deeper way to comprehend them is to realize they are states of being. They are states of consciousness. They are something you feel and experience in this lifetime on this planet. We can have Heaven on Earth or Hell on Earth depending upon how we use our powers of creation here.

The best way to describe Hell is when you get trapped in a creation of your own making – which is exactly what is coming down the pipes when blindly enthusiastic transhumanists suggest we create virtual or digital worlds, create avatars in which to navigate these worlds, and then transfer our consciousness to these avatars and become gods. The point is to live forever in a digital world as an omnipotent immortal. The reality, I suggest, could be very different; we would lose all our sovereignty and individuality and become mindless drones, just another digital brick in the wall or electronic cog in the giant machine. This is exactly the kind of situation that the megalomaniac Controllers already running our world want: one where it is would literally be impossible to think differently to how the hive-mind or the “State” wants you to think.

We Already Are Immortal

Firstly, transhumanism is rooted in a lack of self-knowledge. We already are immortal. Every human being is a unique soul or consciousness, a spiritual being on a human journey. There’s nothing we need to “do” to become immortal. Why are we chasing the pot of gold at the end of the rainbow instead of looking inside of ourselves? Why are we constantly looking outside for solutions rather than getting in touch with our true essence?

Secondly, transhumanism is steeped in the denial of death. It tries to patch up the body with metallic and plastic parts to avoid the body breaking down, decaying and dying – as it naturally does. Transhumanism is a mentality which is so focused on creating an augmented bio-vessel which never wears out that it fails to accept the natural cycle of birth and rebirth, of living and dying, that surrounds us in Nature. A healthy acceptance of death can be a powerful teacher to help you get more out of life and cut through petty grievances. Many spiritual traditions teach that living in constant knowledge of one’s impending death is the best motivator there is to be the best you can be.

In conclusion, transhumanism is a dangerously misguided philosophy. It is so appealing to those who love technology or who have not fully accepted the reality of death as a part of life. Yet,  if we collectively go down the transhumanistic road, we risk sacrificing everything about ourselves that makes us great – our emotions and feelings, our unique thoughts and perspectives, our passion – in exchange for a fake immortality and emotionless subsistence.

Previous Article
The Top 10 Tricks Used by Corporate Junk Science
Next Article
We Have the Peak Oil Myth; Now Peak Water, Too?