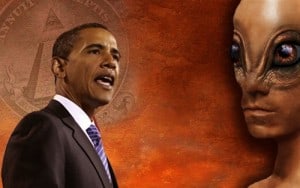 Hiding truth in plain sight is a favorite trick of the elite. Massive and widespread public incredulity over the Truth is the biggest factor working in their favor.

is a favorite tactic of the elite. The biggest factor working in their favor is massive and widespread public incredulity at their schemes, because the scale of evil is simply unimaginable for the average person. It is indeed hard to swallow that a tiny elite, disconnected from compassion, empathy and the rest of humanity, would actively promote mass murder, depopulation and destruction of the Earth, but the evidence proves it to the case, from Kissinger’s 1974 Memorandum 200 (depopulation) to spraying the skies with toxic metals (geoengineering). However, as bad as that is, it still has not gone so deep into the rabbit hole. If you really want an outlandish and ostentatious example of hiding truth in plain sight, check out the video clip above where Obama glibly coats the shocking truth of the ET situation (the Extraterrestrial situation) with a layer of calculated sarcasm.

“The Aliens Exercise Strict Control Over Us”

The overwhelming majority of people watching that clip would have walked away believing the whole thing was a joke. This is exactly the calculated response the elite want to elicit around the alien topic. It seems hiding truth in plain sight by making it into a joke or science fiction is a more effective strategy at shielding reality than merely obfuscation or point blank denial. If the NWO elite can keep people in disbelief and ridicule, if they can keep people mind’s closed enough to the idea of what is possible, then they can keep their control grid intact. Obama is a very good actor; look at his delivery as he says these words:

“The Aliens won’t let it happen.”

“They (The Aliens) exercise strict control over us.”

“I can’t reveal anything.”

“That’s what we’re instructed to say.”

Obama may try, but he can’t hide the truth by pretending it away. Enough of us already know of the extraterrestrial presence on Earth, and that number is only going to increase as time goes by.

The Overwhelming Proof Aliens Do Exist, Have Already Arrived on Earth and Already Interact with Humanity

If you take the time to study eyewitness testimonies, listen to visitation/abduction accounts and read declassified military documents on the ET topic, you will discover a vast amount of evidence not only confirming that ETs exist, but also that they have been here a long time – and entered into arrangements with our Government that are most definitely not in the best interest of humanity. Here is a sample of the thousands of credible sources (many of which come from hardened, rational military men) which reveal that aliens do exist among us:

– Former Command Sergeant Bob Dean who worked at SHAPE (Supreme Headquarters Allied Power Europe), the center of NATO, who personally had many experiences of interacting with Nordic ETs. He reveals that the Shadow Government is deeply involved with ETs in underground facilities (e.g. with the jumproom connecting S4 [Area 51] in Nevada with Pine Gap in Australia) and how there is a big battle between the NWO factions that favor disclosure and the ones that vehemently oppose it.

– Veteran Clifford Stone, who had a personal relationship with a green ET called Korona and has numerous alien tales. Some of these many involved his time in Vietnam where he went on UFO crash recovery missions. He even helped an alien escape from military custody! Stone has publicly stated many times there are 57 alien species already interacting with humanity in some way or another.

– ET Contactee Alex Collier, who has had a long ongoing relationship with evolved beings from the Andromedan Galaxy. Throughout his many video interviews he discusses, in astonishing detail, the ET presence on Earth, the Reptilian control of our government and institutions, the truth about our Moon, bases on Mars, human treaties signed with evil alien races, the Government selling us out for greed and technology and many other topics.

– Former military man Phil Schneider, a brave whistleblower who not only encountered alien beings underground, but also got into a gun fight with them – killing one and wounding another. He was a geologist, structural engineer and underground tunneling expert who participated in the construction of many deep underground cities and bases in North America. In his many video presentations he describes in detail these cities, tunnels and bases, the Government’s secret deal with hostile ETs and advanced alien technology being used by secret US agencies.

– ET Contactee Billy Meier, who was one of the first prolific contact stories. Meier was contacted by an extraterrestrial named Semjase who claimed to be from the Pleiades. She allowed him to take over 1000 clear daytime pictures of her craft and others like it as well as live video – in the 1970s before computers and Photoshop were widespread, so fakery would have been difficult or impossible.

– Former Air Force officer Charles Hall who became familiar with Areas 53 and 54 (called “Dreamland”) and the Dogbone Lake field where the ETs landed their craft. He actually lived with a certain species, which he describes as tall, thin, with large eyes and transparent hair, and with the ability to dress and look like humans, and to grow again once they get old.

– Former Air Force officer Bill Holden who had many UFO and ET experiences, including several encounters with alien beings and UFO craft demonstrations. He witnessed 2 Greys in jumpsuits, and a flying double-saucer UFO emerge from water without a splash. He reveals how relations between aliens and the US government are both ongoing and extensive.

Researchers Who Have Shone Light on the Extraterrestrial Situation

As well as ET contactees and abductees, there are numerous credible researchers who have spent their lives studying the ET phenomenon. Take Roger Leir, an expert on alien implants; Ann Eller, who worked with the father of UFO and Alien research, Dr. J. Allen Hynek, and who served as Hynek’s personal secretary; and Professor David Jacobs who has fascinating evidence of a disturbing ET agenda of building a hybrid human-alien race. Or, listen to Barbara Lamb, Stan Friedman, Bill Cooper, Mary Rodwell, Timothy Good, Steven Bassett, Steven Greer, Linda Moulton Howe or Philip Corso. Of particular interest is the late Dr. Karla Turner, who investigated the ET abduction phenomenon for decades and collected massive testimonial evidence showing that grey and reptilian ETs do exist. She showed that they use deception and coercion, they possess human clones and other advanced technology (e.g. they can produce lifelike holographic images of people and things) and they control abductees with implants. Then there are those who studied the history of ancient aliens, such as Philip Coppens, Michael Tellinger, Zecharia Sitchin and Erich Von Daniken.

Hiding Truth in Plain Sight is Frequently Used in Movies, Music and Comedy

The theme of hiding truth in plain sight can be found in abundance in the entertainment industries, especially science fiction. Movies and TV series such as Star Trek, V are a way that the elite can secretly communicate what technology really exists and what kind of experiences have already happened to us. It’s a way that the elite can release the pressure without having to engage in open disclosure. It’s also a cunning way they can claim plausible denialability, by explaining away all the evidence as “science fiction”.

We Have Been Helped

Lastly, let’s finish with a quote from Dr. Herman Oberth, a NASA Space Scientist, who said this in 1972:

“Today, we cannot produce machines that fly the same as UFOs do. They are flying by means of artificial fields of Gravity. This would explain the sudden changes of directions. This hypothesis would also explain the piling-up of these discs into a Cylindrical or cigar shaped “Mothership” upon leaving the Earth. Because it is in this fashion, that only one field of gravity be required for all the flying saucers. We cannot take credit for our record advancement in certain scientific fields alone. We have been HELPED. And we have been helped by the people of other WORLDS.”

Not all ETs are “bad”. Not all are “good”. There are countless species, and motivations within those species, for us to make many generalizations. There is a whole universe of hominoid beings out there waiting for us to end the planetary secrecy and take our place in the galactic community. However, it’s not going to happen until a critical mass can discern the truth hiding in plain sight.

Previous Article
We Have the Peak Oil Myth; Now Peak Water, Too?
Next Article
20 Ways to Question Your Reality