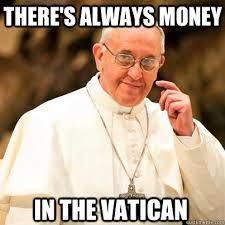 The Pope Francis missile deal has now been exposed. We now know that the Pope (Jorge Bergoglio) brokered a deal to get $200 million of Exocet missiles for the Argentinian Junta.

The Pope Francis missile deal of 1981 has just been exposed

by ITCCS, a courageous organization on a mission to shed the light of truth on British Royalty and Vatican crimes. The information was leaked by an insider in the British civil service who has proved accurate and reliable in the past. He reveals that the current Pope Francis, whose real name is Jorge Bergoglio, aided the brutal Argentinian military junta (led by General Videla) in 1981 by brokering a deal to get them around 20 Exocet missiles for US$200 million. These missiles were later used by Argentinian military against Britain in Falklands War in 1982.

Why Would a Jesuit Catholic Priest be Making Deals with a Military Junta?

So what are the real values of the Jesuits? Are we supposed to believe the top Jesuits in control and with all the power really live according to their vows of chastity, poverty and obedience? What about the Roman Catholic Church? Are we meant to believe that the Pope and the top officials really live according to their proclaimed principles of humility, selflessness and peacefulness? The truth, of course, flies in the face of the propaganda and lies we have been fed by these deceptive religious organizations, who display a front of spirituality while inwardly seek money, power and control just as much as or even more than any ordinary political group. The long list of Catholic Church crimes and Jesuit conspiracy attest to this.

Is the Pope Francis Missile Deal Linked to the Deaths of God’s Banker, Roberto Calvi, as well as Margaret Thatcher?

This revelation doesn’t just stop at missile deals, war, money and politics. It gets into murder too. David Yallop’s excellent book “In God’s Name”, which exposed the extreme inconsistencies and abnormalities surround the death (i.e. assassination) of John Paul I, also provides evidence of Calvi’s role in the Pope Francis missile deal. Just 2 months after the beginning of the Falklands War, Calvi was found dead, hanging under a London bridge. According to the same ITCCS source, Thatcher knew about Bergoglio’s role in the missile deal and had even signed off on an MI6 plan to kill him, which later fizzled out. The source suggests that, therefore, the recent death of Thatcher may not have been accidental or coincidental.

The Pope Francis Missile Deal is yet more proof that the Vatican yields tremendous political power and is first and foremost a political institution – despite its religious facade. Guns, missiles, weapons, drugs, laundered money, child abuse, pedophilia and child trafficking … the Vatican is deeply involved in all of it, just as Pope Francis is. It’s business as usual with the new Pope so don’t expect any great changes, or think that the Catholic Church is suddenly going to find a moral compass, because it’s been 2000 years and they haven’t found one yet.