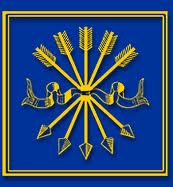 The Rothschilds’ Family Logo. The Rothschilds got the British Government in 1917 to promise them Palestine (in exchange for getting the US into WWI). They own 80% of Israel.

The Rothschilds own 80% of Israel,

according to Simon Schama. They built the Israeli Supreme Court. They own Reuters and the Associated Press (AP), the two biggest media agencies in the world. They have a controlling share in the Royal Dutch oil company, the Bank of England and the LBMA (London Bullion Market Association). They foment wars, install presidents, dethrone kings and bankrupt nations, such is their power.

The Rothschilds typically operate behind the scenes. In the case of Israel, the Rothschilds engineered WWI and waited until 1917 when Britain was in trouble. The Rothschilds then promised the British Government that they could get the US to enter WWI (on the side of Britain) and thus ensure Britain’s victory over Germany et al. However, they wanted something in return: Palestine. Thus the Balfour Declaration was created, which is an official letter from the British Government Foreign Secretary James Balfour to Baron Rothschild. It states that: “His Majesty’s government view with favour the establishment in Palestine of a national home for the Jewish people, and will use their best endeavours to facilitate the achievement of this object.”

There is a big problem with this. Palestine was never Britain’s to give away. It rightfully belongs to the Arab and Palestinian people living there. The Rothschild Zionist Jews came in, took over and forcibly evacuated and killed millions of Palestinians who lived there. They are still committing genocide to this day. The creation of the Zionist state Israel was massively unjust right from the start. Something conceived in iniquity breeds conflict down the road. It is no exaggeration to say that the founding of Israel itself may be the precursor to WWIII.

Zionist Israel controls the governments of the US, Britain, Canada, France and more – and the Rothschilds control Israel.

Previous Article
Obama vs Romney: The NWO Wins Either Way
Next Article
The Flexner Report: How John D. Rockefeller Used the AMA to Take Over Western Medicine