Obama vs Romney: The NWO Wins Either Way

Obama vs Romney: The NWO Wins Either Way 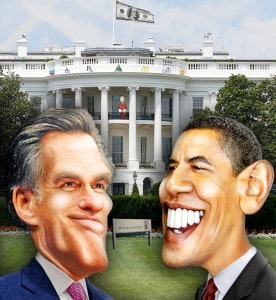 Obama vs Romney: the candidates are virtually identical, with both supporting Big Government spending, torture and the Federal Reserve. The NWO wins either way.

Every time we have an election we are dished up the unenviable choice of having to decide between two corrupt politicians, both of whom have been bought out by the elite (in this case, especially Goldman Sachs). The game of politics is completely rigged. Not only is it virtually impossible to rise to the top without the airtime help of the consolidated mainstream media (which means doing what Big Money wants you to do to return the favor), but the elections are rigged anyway. Joseph Stalin once said, “Those who cast the votes decide nothing. Those who count the votes decide everything.” Uncounted did a good job of exposing America’s election fraud, and there was plenty going on in the 2012 Republican primaries as the Romney camp resorted to low tactics to oust Ron Paul. In one example in Nevada, Romney supporters dressed up as Ron Paul supporters and handed out fake decoy ballots!
As for Obama vs Romney, the candidates are virtually identical, as this excellent article shows. Both men support the Federal Reserve, Big Government, huge government spending and the TARP bailout, while Romney supported Barack Obama’s “economic stimulus” packages. Both candidates supported the renewal of the Patriot Act and are in favor of the NDAA, Guantanomo Bay (which Obama has not closed like he promised to do) and torture (oh, sorry, it’s not torture – its “extraordinary rendition”).

The truth is that both sides have long been bought and paid for by the criminal banking cabal that controls the US Government, mainstream media, military industrial complex and Big Pharma. The masses are given the illusion of choice so they feel like they are in control and therefore will be less likely to rebel. It’s a “psy op” (a psychological operation). Don’t buy into it.

Obama vs Romney. What a joke. There is no choice. The NWO wins either way.