The Fake War on Terror: An Endless War Against a Faceless Enemy

9/11 Inside Job Propaganda The Fake War on Terror

The Fake War on Terror: An Endless War Against a Faceless Enemy 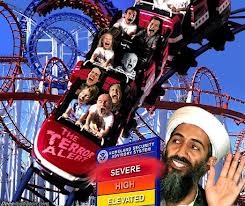 The “War on Terror” is a complete and utter fraud. Bin Laden was the bogeyman. What’s really terrifying is how many people bought it.

The fake war on terror is a brilliant yet devilish

invention of dark governmental propaganda. The war machine needs to new victims and new targets in order to keep churning. And what better way to ensure endless war than to invent a faceless, invisible enemy who is never actually defeated? Since the inside job of 9/11 was carried out and the new propaganda catchphrase “war on terror” was introduced in 2001, we now live in a world where politicians use the vague concept of “terror” as a pretext to carry out whatever form of violence and oppression they like, against anyone they like.

Despite what we may think about our the great heights our civilization has reached, we are still in spiritual kindergarten if we think we can solve problems by going around and declaring war on them. How many wars have we declared on social problems? We have the war on drugs, war on poverty, war on cancer and now the war on terror. It’s a fundamental truth that whatever you fight, you become. You take on the frequency of something you hate because you psychologically attach yourself to it in a very intense way. If you truly want to eradicate a thing (e.g. poverty), you need to focus on its opposite (e.g. wealth). You need to put more energy into creating the thing you want rather than opposing the thing you don’t want. Look how much energy has gone into fighting drugs and cancer. Are they any better? No. There are just as many drugs around and there are still a lot of people dying from cancer. However, the idea was never to truly solve these things anyway – the Government just wanted to give the impression that they were trying when they weren’t. Natural cancer cures already exist in abundance.

The real problem here is that we are constantly in a state of war or fighting. From that state of being, we are never going to solve any problems meaningfully. And the fake war on terror is just another war which will never achieve its goal, only this time, anyone can be accused of being a terrorist, US citizen or not, which means governments can now turn on their own people much more easily.