Trump Ramping Up Tension against Iran & China – Just a Coincidence?

Trump Ramping Up Tension against Iran & China – Just a Coincidence?

Trump of late has been ramping up tension against Iran & China. Since they are in an alliance with Russia, what will happen if conflict arises?

The tension against Iran and China

has been increasing since Donald Trump became the US President-Elect. It may seem all innocent enough to the casual onlooker – after all, Trump has been speaking out against Iran for a long time, and he made quite a few allusions to unfair trade deals with China throughout his campaign too. Yet, on a deeper level, there’s the work of a hidden hand. Trump is filling his cabinet with military generals strongly opposed to Iran and Islamic terrorism. He is also filling his cabinet with Goldman Sachs-connected millionaires and billionaires who may be happy to support Trump in his quest to even the score with China (and potentially start a trade war). On election night, Trump took a congratulatory call from Taiwanese leader Tsai Ing-wen, an action which angered China (who insists the US must follow the One China policy if America wants to have a good diplomatic relationship with it). Taiwan wants independence from Beijing, and Trump taking the call broke with US diplomatic tradition of only dealing with Beijing not Taipei. Yes, Trump has made friendly overtures to Russia’s Vladimir Putin, but is this overshadowed by the tension against Iran and China that he has been ramping up? Russia, China and Iran have forged a strong military alliance. To attack one of them is to attack all of them. Is the recent tension against Iran and China just random happenstance? Or is it being coordinated behind the scenes so as to lead towards further conflict and the possible outbreak of the NWO’s long-planned World War 3?

Trump has now added to either his cabinet or advisor circle James “Mad Dog” Mattis (Secretary of Defense), Michael Flynn (National Security Advisor), Mike Pompeo (CIA Director) and Jeff Sessions (Attorney General). These guys are all vehemently anti-Iran; even just having them as advisors is bound to create tensions against Iran. The point here is that Trump is an ardent Zionist – he made that very clear by sucking up to Israel like almost every other major US politician. Iran is not a credible threat to the US, but they are to Israel (not in the sense they want to attack Israel, but rather in the sense that they will be a formidable enemy if Israel tries to keep expanding its territory eastward). So all this rhetoric and ramping up of tension against Iran – who’s it really serving? America or Israel?

This Politico article said the following of former US Marine Mattis:

“Mattis’ anti-Iran animus is so intense that it led President Barack Obama to replace him as Centcom commander … Mattis’ Iran antagonism also concerns many of the Pentagon’s most senior officers, who disagree with his assessment and openly worry whether his Iran views are based on a sober analysis or whether he’s simply reflecting a 30-plus-year-old hatred of the Islamic Republic that is unique to his service.” 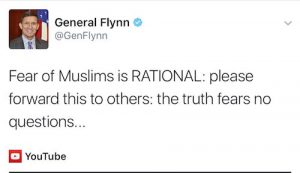 Michael Flynn is cut from the same cloth. According to RightWingWatch, Flynn has likened Islam, “a religion with 1.6 billion adherents worldwide, to “a cancer” and said that documents recovered from terrorist organizations instruct followers to “get into the bloodstream of the opposition,” which Flynn said means to attack Western nations”. Here is what he had to say about Islam:

“Islam is a political ideology, not a religion. It definitely hides behind being a religion.” – Michael Flynn

There hasn’t just been tension against Iran; there’s been tension against China too. Trump has made tweets from his twitter account (below) complaining about the unfair deal that China gets in trading with the US. Overall he has been quite critical of China, as this article summarizes:

“Trump also repeated earlier accusations that China is manipulating its currency, saying “we’re being hurt very badly by China with devaluation.” He piled on the criticism in other hot-button areas: “With taxing us at the borders when we don’t tax them — with building a massive fortress in the middle of the South China Sea — which they shouldn’t be doing.” Concerning nuclear weapons, Trump argued that China as North Korea’s main patron “could solve that problem.” “Frankly, they’re not helping us at all with North Korea,” he said.” 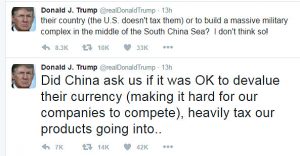 By taking the call from Taipei, Trump broke 37 years of diplomatic tradition. The US has not had official diplomatic relations with Taiwan since 1979, when it switched recognition from Taipei to Beijing. Trump strongly defended taking the call from Ing-wen, saying that to ignore it would have been disrespectful. This may be true, but who prompted her to make the call, knowing it would irritate China and start the process of driving a wedge between Trump and China? Beijing has not controlled Taiwan for more than 60 years, but considers it part of China, a rogue state that needs formal unification with mainland China. However, the US is Taiwan’s main ally and arms supplier.

Trump took the dialogue further by putting the one-China policy on the negotiating table. He said, “I don’t want China dictating to me … I don’t know why we have to be bound by a one-China policy unless we make a deal with China having to do with other things, including trade.” The Chinese website Global Times published an article which came down very heavily on Trump’s comment about the one-China policy:

“The one-China policy has been the foundation of Sino-US relations since 1979 when both countries established formal diplomatic ties. “China and the US have had many serious frictions and tensions after 1979, but no US president or president-elect has dared challenge the one-China policy,” Shi Yinhong, director of the Center for American Studies at Renmin University, told the Global Times. It would be unimaginable if Trump really wants to overthrow the foundation of the Sino-US relationship, because China will definitely not compromise. There is no space for bargaining on the Taiwan question, Shi said.

“If Trump dares risk destabilizing the bilateral relationship, he will receive the strongest reaction from China which includes withdrawing its ambassador from the US, economic sanctions and military action.””

Did the Chinese just say military action? Wow. Someone just hit a raw nerve. Are we supposed to believe this is all just randomly unfolding, especially after the US military’s Pivot to Asia and the ongoing militarization of the Pacific?

As mentioned above, 3 of the most powerful nations in Eurasia have formed a military alliance. The Russia-China-Iran alliance has been in action for some time, as can be seen by the way these nations have supported each other during the Syrian War. They are bound together now by common interest and the need for mutual defense against Western aggression. You can’t just attack 1 or 2; they are strategically aligned and will militarily defend each other if any one of them is attacked.

This alliance has come about is response to the US Empire steadily growing around the world. As Zbigniew Brzezinski has pointed out in his books, Eurasia the principal foundation for future global dominance, because it comprises around 70% of the Earth’s resources. The US Military already has numerous bases in Eurasia; Russia, China and Iran realize they better stick together or they will be picked off, one by one. Ever since the fall of the USSR in 1991, the US has deceived, broken its promises to and encircled Russia. Here is a brief summary of what has happened since then:

– The US violated their promise to Russia by allowing NATO to extend beyond the borders of Germany;

– The US withdrew from the ABM (Anti Ballistic Missile) Treaty in 2001;

– The US continually invaded nations in the Middle East (Kuwait, Iraq, Afghanistan, Syria) to gain a foothold in Eurasia;

– US-sponsored forces attempted to overtake Georgia (right on Russia’s doorstep) in 2008; and

– The US spent $5 billion (as admitted by neocon Victoria Nuland) on regime change in Ukraine, including a bloody revolution on the Euromaidan in 2013 to install a Neo-Nazi government.

Meanwhile, Iran has also been heavily involved in the Syrian War since Syria is an important ally to the Islamic republic; Iran is bound by a mutual defense agreement it made with Syria in 2005. China has been siding with Russia and Syria for some time now, using its veto power at the UN Security Council level and voting alongside Russia in almost every case.

The Trump Phenomenon: All Happening for a Reason

Either the elections are rigged or not. Given the amount of overwhelming proof we have of rigged software and rigged machines, one can only conclude that the NWO manipulators must have wanted Donald Trump to be at the helm for the next 4 years of their agenda. Superficially Hillary appears to be more of a war hawk, and even though Trump has signaled he wants peace with Russia, he may well ignite conflict with Iran and China – and end up getting the US into World War 3 with Russia anyway. It would be wise to watch Trump very, very closely – and it’s imperative that we keep on our toes to monitor the new Administration. There is every reason to believe that dark forces are still conspiring to move the pieces on the geo-chessboard to bring the world to war yet again. The recent tension against Iran and China is a clue.