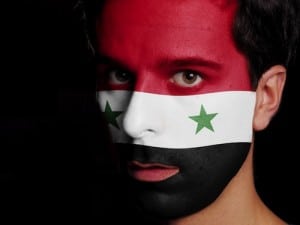 With Russia already in Syria (getting help from Iran and Iraq), there’s now a report China is sending in its troops too. A Syria WW3 scenario just got more likely. Will World War 3 break out there?

The likelihood of a Syria WW3 scenario

just increased with the latest news that China is about to send military troops to team up with the Russians (who are getting help from Iran, Iraq and Syria itself with a joint information center) in defending the Syrian Army of President Bashar Al-Assad and targeting ISIS. The Iranians have been assisting Assad for a long time as part of their regional alliance through channels such as Hezbollah; then on September 21, 2015, there were reports of Russia sending troops, jets and other military equipment to Syria. With the US, UK, Israel, France, Turkey and others already operating in Syria as a loose alliance on one side, and Russia, China, Iran, Iraq and the official Syrian Army involved on the other, the probability is getting higher all the time that the situation could erupt into a world conflict, and that we could potentially witness a Syria WW3 scenario. 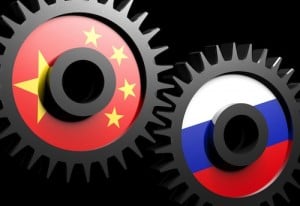 China and Russia are joining forces militarily; they must be prepared for a Syria WW3 outbreak.

“After the Russians and Iranians, Chinese troops reportedly are teaming up with the Syrian regime forces in what is being termed as the deal that will allow President Bashar al-Assad to stay in power. A report claims that a Chinese naval vessel carrying dozens of “military advisers” is on its way to Syria and the Chinese troops will then join with the “hundreds” of Russian soldiers. “The Chinese will be arriving in the coming weeks,” a Syrian army official told Lebanon-based news website – Al-Masdar Al-‘Arabi. The Chinese ship has crossed the Suez Canal in Egypt and is currently in the Mediterranean Sea. However, according to Israeli military news website – DEBKAfile, the aircraft carrier, Liaoning-CV-16, is already docked at the Syrian port of Tartus, accompanied by a guided missile cruiser.”

US Meddling in Syria in Line with the Wolfowitz Doctrine

It is certainly disturbing to see so many of the world’s greatest military powers gathering in such a small country and actively operating there. Even if they say there are all mainly there to fight ISIS and are not directly targeting each other (yet), there is always the chance that hostilities could be triggered by accidental crossfire. However, to understand what is going on, we need to remember the grand NWO (New World Order) plan as it relates to geopolitics. Ever since the fall of the Soviet Union in 1991, the US has emerged as the world’s sole superpower. Since then, no matter who has been in power, its foreign policy has been driven by schools of thought like the Wolfowitz Doctrine and Brzezinski’s The Grand Chessboard, which urge the need for the US to unashamedly dominate Eurasia (where most of the world’s resources lay). Even France is getting in on the action, absurdly claiming they are bombing Syria in “self-defense”! 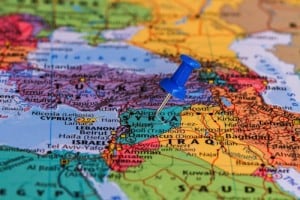 Many sources inform us that Syria is a target of the Zionist-US-UK NWO.

Remember how General Wesley Clark said that he was told around 10 days after the 9/11 false flag attack that the US plan was to attack 7 countries in 5 years (Iraq, Syria, Lebanon, Libya, Somalia, Sudan and Iran)? Remember how arch-manipulator and war criminal Henry Kissinger said that the events unfolding in Egypt were just the First Scene of the First Act of a very long play? Remember how 33° Freemasonic Grandmaster Albert Pike wrote a letter to Giuseppe Mazzini in 1871, prophesizing 3 World Wars to come? Pike’s WW3 prediction stated:

“The Third World War must be fomented by taking advantage of the differences caused by the “agentur” of the “Illuminati” between the political Zionists and the leaders of Islamic World. The war must be conducted in such a way that Islam (the Moslem Arabic World) and political Zionism (the State of Israel) mutually destroy each other. Meanwhile the other nations, once more divided on this issue will be constrained to fight to the point of complete physical, moral, spiritual and economical exhaustion …We shall unleash the Nihilists and the atheists, and we shall provoke a formidable social cataclysm which in all its horror will show clearly to the nations the effect of absolute atheism, origin of savagery and of the most bloody turmoil. Then everywhere, the citizens, obliged to defend themselves against the world minority of revolutionaries, will exterminate those destroyers of civilization, and the multitude, disillusioned with Christianity, whose deistic spirits will from that moment be without compass or direction, anxious for an ideal, but without knowing where to render its adoration, will receive the true light through the universal manifestation of the pure doctrine of Lucifer, brought finally out in the public view.” 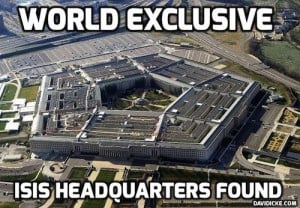 The creation of ISIS by the US may be because Syria has been such a hard nut to crack. But will they risk a Syria WW3 scenario?

The Zionist-US-UK axis was able to knock off countries like Iraq, Libya and Sudan with relative ease, but Syria has been a stumbling block on their road to world domination, because it has powerful allies like Iran and Russia who have stepped in to defend it. We know this Zionist-US-UK axis has gone to great lengths to conquer Syria and to remove Assad from power, including creating and funding a hard-core group of religious militant terrorists, ISIS/IS/IL/Daesh. The ISIS psy-op has been thoroughly exposed, however, and it is now common knowledge that Israel and US are behind ISIS (see David Icke’s humorous picture above).

The questions now remains: are these geopolitical manipulators crazy enough to trigger WW3 in Syria? Will they go to any length to conquer this small Middle Eastern nation? Will they risk a Syria WW3 outbreak? If what we know of their plans is correct, they have to first take out Syria in order to then take out Iran – so that the Eurasian encircling of Russia and China is complete. Time will tell if a Syria WW3 scenario erupts, but disturbingly, as the days go by, the military buildup – and therefore the likelihood – keep increasing.

10 Signs That ISIS is a Scripted Psyop

Previous Article
Want to Understand US Action in the Middle East? Look at the Wolfowitz Doctrine
Next Article
A Tale of Two Leaders: Obama vs. Putin at the UNGA