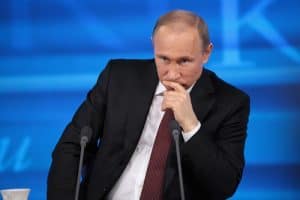 Will the world heed the recent Putin WW3 warning? We are in impending danger and being pulled in irreversible direction. Will journalists tell their people?

dished out by the Russian President to journalists at the end of the International Economic Forum at St. Petersburg was very telling – and urgent. For years, Vladimir Putin has been frustrated by journalists, especially Western journalists, who are not reporting what is really going on in the world, or worse, deliberately spouting propaganda because they are on the payroll of the CIA or US Government (like many embedded journalists in Western Europe, as revealed by Udo Ulfkotte who came clean about the arrangement in 2014). For years, Putin has made it clear that the writing is on the wall, and that he can very clearly see the direction and purpose of US-NATO actions. These are exactly in line with the Wolfowitz doctrine and Brzezinski principle of isolating, weakening and surrounding Russia so that no other country which could possibly challenge the preeminent American supremacy as the world’s only superpower. This nefarious US-NATO strategy is patently obvious, yet unfortunately, many people in the world are still unaware of it – and an awakened populace is necessary to stop it.

Putin is a very interesting character. Despite being a former member of the Russian KGB, he has a knack for diplomacy and has showed a cool head in several situations where someone else in his place may have rushed to war.  For instance, Putin did a masterful job in August-September 2013 to intervene when Obama was blowing hot air about Bashar Al-Assad, President of Syria. Obama was claiming that Assad had “crossed a line” and was using chemical weapons on his own people, another massive lie. Putin called Obama’s bluff and stepped in to resolve the situation diplomatically and masterfully before it became a trigger for WW3. On another occasion last year (in November 2015), Russia was astonishingly provoked by NATO member Turkey (who was aiding ISIS at the time) who shot down a Russian jet that Turkey claimed strayed into Turkish air space, but which Russia outright denies.

Putin contrasted sharply with Obama at the 2015 UNGA (United Nations General Assembly), where Putin highlighted how the US had created ISIS in order to further their geopolitical domination. He also laughed with disdain at the clueless MSM journalist in the video clip who repeated NATO’s propaganda claim that their Missile Defense Shield was only expanding eastward (gobbling up the Eastern European nations that used to be part of the USSR) for reasons of defense against Iran! 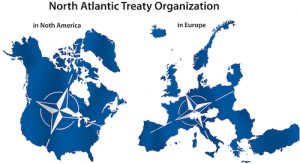 NATO: All about surrounding Russia in preparation for WW3.

In the following video clip (embedded above), Putin gives it straight to journalists and lays into them for not doing their jobs properly to inform the populace about how the world, through NATO’s persistent and endless eastern expansion towards the Russian border, is being driven towards WW3:

“The ‘Iranian threat’ does not exist but the NATO Missile Defense System is being positioned in Europe … [US-NATO is] always referring to the ‘Iranian threat’ in order to justify this system. Once again, they lied to us. Now the system is functioning, and being loaded with missiles. As you [journalists] should know, these missiles are put into capsules, which are used in the Tomahawk long range missile system.”

“So, these are being loaded with missiles that can penetrate territories within a 500km range, but we know that technologies advance, and we even know in which year the US will accomplish the next missile. This missile will be able to penetrate distances of up to 1000km, and then even further, and from that moment on, they will start to directly threaten Russia’s nuclear potential.”

“We know year by year what’s going to happen, and they know that we know. It’s only you that they tell tales to, and you buy it, and spread it to the citizens of your countries. Your people in turn do not feel a sense of the impending danger – this is what worries me.”

“How do you not understand that the world is being pulled in an irreversible direction, while they pretend that nothing’s going on? I don’t know how to get through to you anymore …” 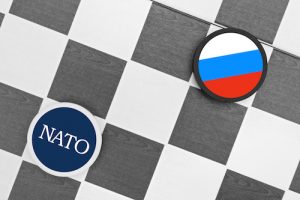 NATO vs. Russia on the geopolitical chessboard.

This is a clear Putin WW3 warning. He said these words just recently on June 17th, 2016, at a meeting with foreign journalists at the conclusion of the Saint Petersburg International Economic Forum. Yet, how many will heed the warning? Those paying attention know the US, and the organizations it leads and dominates like NATO, are being used as the military tool of the New World Order. The US is being utilized to spearhead the creation of a One World Government by culturally, economically and militarily dominating every other nation on Earth, so that every nation is brought into the fold, and that there will be no meaningful or significant resistance when the system changes from sovereign nation-states to a totalitarian, socialist world order.

It is especially important to see through the fake threats the NWO manipulators invoke to justify more centralization of power and control (Iran is fully complaint with the nuclear deal as the US affirmed). It is also essential to see through the trick of Satanic inversion, whereby a thing is called is opposite (attack is called defense, war is called peace, etc.) is order to hide the real intention and motivation. Let’s hope enough people all over the world pay attention to the Putin WW3 warning, because inevitably there will come a point where NATO will be able to easily and preemptively strike Russia, China, Iran and any other “recalcitrant” nation in their eyes.