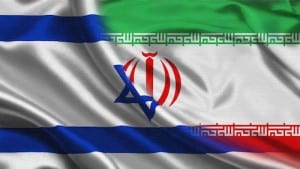 Iran is fully compliant with the nuclear deal it signed on Jan. 16, 2016, according to the US, but Israel still refuses to confirm its own nuclear weapons.

with the nuclear deal it signed on January 16th, 2016, according to Samantha Power, the US ambassador to the UN. Iran signed an agreement over its nuclear program called the Joint Comprehensive Plan of Action (JCPOA) with P5+1, the 5 permanent members of the UN Security Council (US, UK, France, Russia and China) plus Germany. Despite the abject fearmongering coming out of many members of the Zionist regime of Israel – and a lot coming from Zionist-owned US politicians – none of the dire prophecies that were predicted look like they contained any semblance of truth. So far Iran is fully compliant, but meanwhile, Israel continues its official policy of opacity regarding its nuclear weapons, refusing to either confirm or deny the existence of them – despite the fact that the world has long known of them.

US Affirms that Iran is Fully Compliant So Far

“What this deal does if implemented – and so far the implementation has been strong but it’s very early days – is it cuts off the pathways to a nuclear weapon and it gives us much more visibility into Iran’s program than we had before.”

As I discussed in an earlier article The Truth About Iranian Nuclear Intentions, the evidence showed that Iran never had any intention of developing a nuclear bomb, and their supreme leader (Ayatollah Ali Khamenei) issued a fatwa banning the idea. Officials from several intelligence agencies around the world, including US and Israeli intelligence agencies, were closely monitoring Iran’s nuclear program, and stated on the record that Iran showed no signs of pursuing the ability to make nuclear weapons. 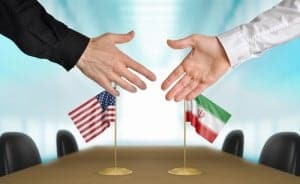 Iran is fully compliant thus far according to US ambassador Samantha Power.

The Real Nuclear Problem in the Middle East

If you’re concerned about nuclear weapons, don’t worry about Iran. Iran is fully compliant thus far. Take a look at the Zionist regime of Israel. For the background of how Israel got nuclear weapons in the first place, check out this great German documentary Israel’s Bomb: A Radioactive Taboo. It reveals how Israel struck a secret deal with elements of the French military and managed to get their help, unbeknown to the most of the French Government. Israel later got help from Germany under Adenauer. Israel had enough influence over Britain, France and Germany that it got assistance from all of them. 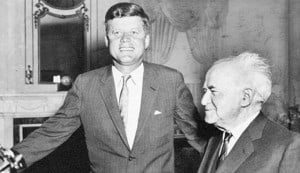 JFK and Israeli PM Ben Gurion. JFK was the last US President to confront Israel over its nuclear program. Photo Credit: henrymakow.com.

It was only in 1961, when JFK came to power, that Israel was subjected to pressure over its nuclear ambitions. As US President, JFK tried harder than anyone to stop Israel getting the bomb. He demanded American inspectors be allowed to visit Dimona (site of Israel’s nuclear program), threatening to withdraw all economic aid unless Israel agreed. Israel eventually agreed, but stealthily built a separate control center (that had nothing to do with its weapons program) to make it look like Dimona was a civilian nuclear program.

JFK was not fooled. He put heavy pressure on Israeli Prime Minister David Ben Gurion to sign the nuclear Non-Proliferation Treaty (NPT). Ben Gurion refused, saying Israel would first need other weapons to defend itself; JFK gave Israel anti-aircraft missiles; Israel then, in an act of utter treachery, put them around Dimona to protect it! Not long after this incident JFK was killed, and his successor Lyndon Johnson no longer looked closely at Israel thereafter. This marked the period when Zionism began to dominate the USA. In fact, it was LBJ who signed off on the false flag attack on the USS Liberty by Israeli jets in 1967. In another act of treachery, Johnson was reported to have exclaimed, “I want that goddamned ship on the ocean floor.” 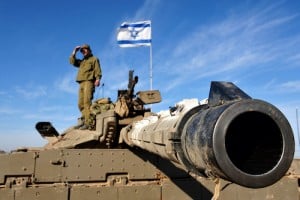 Israel has nuclear weapons – it’s been an open secret for 50+ years.

The US wasn’t the only one deeply concerned about Israel getting nuclear weapons. Russia also knew about it. In 1967, it sent some of its military jets – MiG-25 or “foxbats” – over Dimona on a military sortie in May 1967, just prior to the 6-day war. It was ultimately unsuccessful in its mission.

Later, in 1973, Syria and Egypt attacked Israel (the Yom Kippur War). Israel then put its nuclear weapons on standby alert, which was seen by many analysts as Israel declaring the Samson option. The Samson option meant that in the event Israel was losing a battle or war, it would as a last resort detonate its nuclear arsenal so everyone would all go down together. At this point the US stepped in to negotiate with USSR and the Arab states, and gave Israel even more conventional weapons to not go nuclear. The Cold War had expanded to include the Middle East. Ever since, Israel and US have been (somewhat uncomfortable) nuclear allies.

Conclusion: When you Hear Israel Complain about Iran’s Nuclear Program, Look at Its History of Hypocrisy

Next time you hear the Islamophobia being ratcheted up again Iran, by Israel itself or by Zionist agents abroad, remember Israel’s history of hypocrisy. Recall that Israel is believed to possess 400+ nuclear weapons yet still refuses to officially admit it, or to sign the nuclear NPT. Remember that Israel has been crazy enough to have leaders talk of the Samson option or the possibility of blowing everyone up, including themselves, in mutually assured destruction. At this stage, Iran is fully compliant; Israel is the still the rogue state of the Middle East, owned by the Rothschilds and behind many of the world’s crimes.

Previous Article
Mustering the Emotional and Spiritual Maturity to Face the Satanic Cult
Next Article
Permanent War in Syria: US Unleashing Turkey & Saudi Ground Forces to Do What ISIS Can’t