A Tale of Two Leaders: Obama vs. Putin at the UNGA

A Tale of Two Leaders: Obama vs. Putin at the UNGA 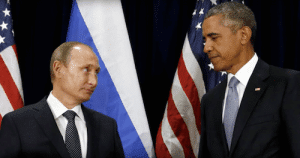 Obama and Putin at the UNGA (United Nations General Assembly) were in sharp contrast: one was full of arrogance and hypocrisy, the other sharp and direct.

Watching Obama and Putin at the UNGA

(United Nations General Assembly) was a very interesting glimpse into the world of geopolitics and diplomacy. It was a tale of two leaders, or rather a misleader and a leader. Obama delivered the same old hollow rhetoric of “democracy and peace” we’ve come to expect from the US Teleprompter-in-Chief, while Putin was amazingly upfront and honest, though couching his words in diplomatic speech so as to avoid being too confrontational. Putin managed to avoid using the terms “United States” or “America” all the while directing strong admonitions towards the USA, and even asking at one point: “Do you realize what you have done?”

Obama’s speech praised “cooperation instead of conflict“, a new world system which prevents “bigger countries from imposing its will on smaller countries” and decried those who believe that “might is right“, that “order must be imposed by force” and that “individual rights don’t matter“. As usual, the gross hypocrisy of his speech was starkly evident right from the start. Obama is a fine orator and his words always sound so nice, but it is rare indeed to find his actions matching up to his words.

When Obama was condemning the idea of bigger countries manipulating smaller ones, does he recall the way he oversaw the US-backed coup in Ukraine in 2014, which overthrew the legitimately elected government of Viktor Yanukovych and inserted Neo-Nazis which were more favorable to the US Government, at the cost of at least US$5 billion according to neocon Vicky Nuland?

When Obama was decrying the idea that might is right, does he recall his own Kill List and Disposition Matrix, where he extra judicially assassinated people in the Middle East, including US citizens?

When Obama was praising the idea of respecting individual rights, does he recall that he signed one of the most draconian piece of US legislation ever to be enacted? The NDAA (National Defense Authorization Act) signed by Obama on Dec. 31st, 2011, allows a US President the power to arrest and indefinitely detain any US citizen – without charge or trial – in gross violation of the 4th, 6th and many others Amendments! 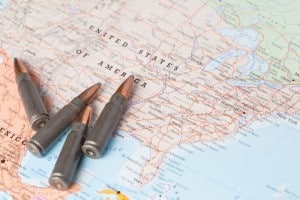 The USA: always ready for war.

Obama also stated that “I believe that what is true for America is true for virtually all mature democracies”, which again shows that US rhetoric and foreign policy is based on American arrogance that it is clearly the best country in the world, it knows what is best for everyone, and that it should be the undisputed leader of the New World Order. Whenever Obama refers to or implies American exceptionalism, I am left wondering what exactly he means by this phrase. Does he mean that the USA is exceptional:

– in its history of aggression of invading foreign sovereign nations who posed no threat?

– since it routinely uses its world superpower status to bully other countries into bowing to its will?

– in how many foreign governments it has illegally overthrown (57 and counting)? 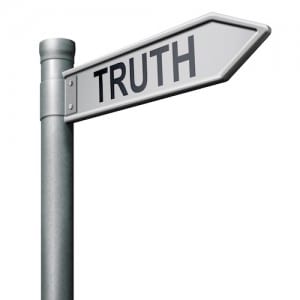 Putin at the UNGA was the standout when it came to calling a spade a spade.

Putin’s speech was direct and upfront, although by his standards, it was relatively restrained. In Munich 2007, he famously launched an all-out attack on US global hegemony, but this time, Putin found a way to get his strong message across without even mentioning “America” or the “United States” by name.

Putin at the UNGA stated that “we should all remember the lessons of the past. For example, we remember examples from our Soviet past, when the Soviet Union exported social experiments, pushing for changes in other countries for ideological reasons, and this often led to tragic consequences and caused degradation instead of progress” implying it is now the US that is “exporting” its brand of values. He further said that “It seems, however, that instead of learning from other people’s mistakes, some prefer to repeat them and continue to export revolutions, only now these are “democratic” revolutions” calling out the US on the way it obscures its foreign meddling and intervention with the excuse it is promoting “democracy”.

Putin also called out how the US has created and funded ISIS: “In fact, the Islamic State itself did not come out of nowhere. It was initially developed as a weapon against undesirable secular regimes. Having established control over parts of Syria and Iraq, Islamic State now aggressively expands into other regions … It is equally irresponsible to manipulate extremist groups and use them to achieve your political goals, hoping that later you’ll find a way to get rid of them or somehow eliminate them.”

Putin at the UNGA even touched on the subject of free trade agreements like the TPP and TTIP: “I would like to note one more sign of rising economic selfishness. A number of nations have chosen to create exclusive economic associations, with their establishment being negotiated behind closed doors, secretly from those very nations’ own public and business communities, as well as from the rest of the world. Other states, whose interests may be affected, have not been informed of anything, either. It seems that someone would like to impose upon us some new game rules, deliberately tailored to accommodate the interests of a privileged few, with the WTO having no say in it. This is fraught with utterly unbalancing global trade and splitting up the global economic space.”

Putin: Do You At Least Realize Now What You’ve Done?

Putin at the UNGA came right out and blasted Obama and the hawks running the US foreign policy: “I’m urged to ask those who created this situation: do you at least realize now what you’ve done? But I’m afraid that this question will remain unanswered, because they have never abandoned their policy, which is based on arrogance, exceptionalism and impunity.” The US has caused untold suffering, misery and destruction with its bullying and interventions abroad. Now, with news of Russia and China entering Syria – to subdue the ISIS that the US and Israel created – the chances of WW3 just got higher. 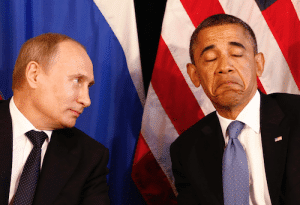 Obama and Putin at the UNGA was really about this: the unipolar vs. the multipolar model.

A key passage from Putin’s speech is that “No one is obliged to conform to a single development model that is considered by someone else as the right one“. What underlies this is the same basic idea Putin voiced vehemently to the world community in Munich 2007: that Russia and many other nations want a multipolar world, not an American-led unipolar New World Order. This of course goes against US foreign policy as influenced by the Wolfowitz Doctrine, Brzezinski and others, which assume that American supremacy is right, and plan to grab Eurasia by encircling Russia and China.

The contrast between a unipolar world and multipolar world is at the heart of the arguments and fighting going on between Obama and Putin, and among the US, Russia and other countries generally. If humanity is going to be forced into a One World Government, the only way it is going to produce freedom for the overwhelmingly majority of people is if it a decentralized, multipolar government that respects the different cultures and viewpoints of the world. The people of the world are not going to unite if it means sacrificing their identity, culture, traditions and ways of life to become standardized and homogenized under a hierarchical and totalitarian New World Order, which dictates to them what they can or cannot do in every aspect of their lives via schemes like UN Agenda 21.

Fabricating Reality: The Phantasmic Phenomena of ISIS and Ebola

How the TPP is Going to Affect You

Previous Article
Russia Already In, China to Come: Chances of WW3 in Syria Just Got Higher
Next Article
Mass Migration to Europe: All in Line with the New World Order