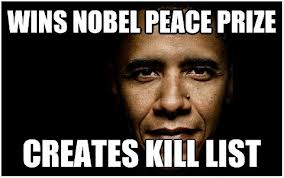 The power to kill: every Tuesday Obama rolls up his sleeves and decides who’s going to get murdered by drones. And this is a Nobel Peace Prize winner?

of targets (including US citizens) who are chosen to be killed by UAVs (Unmanned Aerial Vehicles) or drones without charge, trial or due process. After receiving a Nobel Peace prize and campaigning against war in 2008 to get elected, Obama proceeded to launch his first preemptive drone strike after only being in office for 3 days! A later strike occurred in Yemen on December 17th, 2009 and can accurately and legally be described as “mass murder”, since it also killed 21 women and 14 children – who are merely viewed as statistics or “collateral damage” by the heartless national security state. That makes Obama a war criminal and CIA Director David Petraeus (who conspired with the Yemeni president to cover it up) an accessory.

Obama has decided to give himself the authority to unilaterally declare people “enemy combatants” or “enemies of the state”. He has now overseen at least 222 drone strike missions in at least 4 countries (Pakistan, Afghanistan, Somalia and Yemen) which have killed at least 50 people (including at least 3 US citizens) – but seems to be lying about the exact number. He is now a despot, a tyrant who is in flagrant violation of US law, international law and basic human rights. The fact that his is a winner of the Nobel Peace Prize is an absolute disgrace to that distinction and renders it quite meaningless.

Next time you see Obama and his cheesy smile, remember this: he’s killing innocent people and creating “blowback” (an espionage term for unintended consequences of a covert operation that are suffered by the civil population of the aggressor government) against the US with his drone strikes. The Obama Kill List is further proof we are living in a dictatorship.