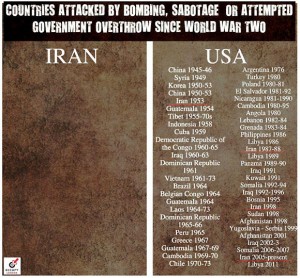 No country can compare to the USA when it comes to foreign meddling, intervention and aggression

Look at the USA history of aggression!

It’s staggering: bombing, sabotage, assassination, drugs, weapons, overthrow of legitimate government, installation of puppet dictators, condoning of ethnic cleansing and genocide … the list goes on and on. No other country can even come close to the outrageous violence and aggression shown by the US, and yet it trumpets its hollow rhetoric of “spreading democracy” louder than anyone.
The stench of hypocrisy is sickening. The CIA, Mossad and former IAEA inspector Robert Kelly all affirm that Iran is not developing nuclear weapons, and yet the controlled and consolidated mainstream media is still beating the war drum just as it was before the Iraq invasion of 2003. As it turns out, Iraq had no WMD (Weapons of Mass Destruction) and Saddam Hussein was absolutely no threat to the United States. It was all a big lie. Saddam had nothing to do with the 9/11 either, but that was supposedly the reason the US invaded.
Here we are again, hearing the same deceptive rhetoric with Iran. They want to believe Iran is a big danger and get really scared. Wake up! “Those who do not learn history are doomed to repeat it,” said George Santayana. May we avoid WWIII and may peace prevail.