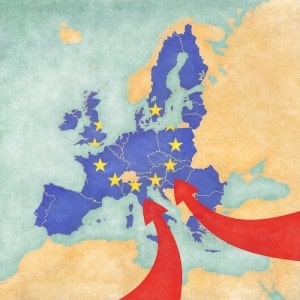 Mass migration to Europe – totally in alignment with the causes and aims of New World Order.

The mass migration to Europe

currently underway is a crisis of epic proportions. It is also totally in alignment with the goals of the New World Order (NWO). It is no coincidence, on many levels, that Europe is being flooded with immigrants. The warmakers could not have expected anything else when they overran a small nation like Syria by funneling weapons into the hands of terrorist groups (ISIS, Al-Nusra, FSA, etc.). There are now at least 10 foreign nations fighting in Syria (US, UK, France, Israel, Turkey, Saudi Arabia, Iran, Iraq, Russia and China), which has obviously elevated the chances of WW3 breaking out. However, there is more to the story than just Syrian refugees, with evidence indicating a surprising percentage of migrants are not real refugees. Ultimately, the mass migration to Europe is another example of “ordo ab chao” or the order out of chaos motto of the NWO – create confusion and disorder so you can more easily mold your ideal order (worldwide dictatorial fascism/communism). 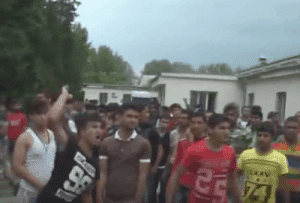 The mass migration to Europe has already resulted in many riots, especially in Hungary.

It is important to remember, on topics such as this, that political correctness is an invention that came from the Rothschild-funded School of Frankfurt, and that if often is used to suppress truth tellers and, in true Orwellian style, limit that scope of acceptable opinion and speech.

We are witnessing the biggest mass movement of people since the end of WW2 in 1945. It is absolutely uncontrolled. Some people have described this sudden mass migration to Europe of Muslim and Arab refugees as an invasion, while others insist that “no person is illegal” and that it would be better to have a world without borders. It is easy to dismiss those of the former opinion as racist or xenophobic, but consider for a moment: how well would any country or region deal with tens or hundreds of thousands of migrants suddenly arriving at its doorstep demanding assistance? You can imagine that would feel very overwhelming or threatening for the people already living there, even if all the migrants were well-intentioned.

Immigration can work well when the receiving or destination country has time to review exactly who is passing through its gates, and has some say in how many and what type of people. It works out much better when migrants blend in and assimilate to their new nation, by learning the language and adopting some or most of the new culture. If they resist doing this, you end up getting pockets of separate ethnicities and nationalities within a larger country, less social cohesion, and a less connected and integrated society. In worst case scenarios, you end up with massive in-fighting and groups trying to impose their religious, cultural or political beliefs on other groups, by force if necessary. 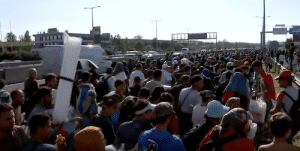 Mass migration to Europe – an important point to determine is: how many migrants are genuine refugees?

How Many Migrants Are Genuine Refugees?

Of course, when a country is suddenly engulfed in war, or overrun by a brutal dictator who starts killing people, you will have citizens fleeing. If your country was being ravaged by war, wouldn’t you want to run for your life? In such cases there is no time for pleasantries or “ideal migration” where destination countries can carefully screen and choose who they will take in. In such situations, the only compassionate response is to take people in and help them. With the ongoing mass migration to Europe, my heart goes out to those Syrian and other refugees who are running for their lives.

However, a strange element in this whole European refugee crisis is that not all of the migrants are women, children or family men. Indeed, not all appear to be genuine refugees (as Nigel Farage explains in the video embedded above). Many are not from Syria (as much as 45% are not according to these UN stats). There are many young Muslim males among the migrants who appear to be single, without families to support. Some of them are refusing food (here in Hungary and here) – presumably because it is not halal. Would a genuine refugee really refuse food just because his religion tells him it has to be made in a certain way? Some of the migrants are starting riots (e.g. in Lesbos, Greece and many other places in Europe). Why are rich Arab states (like Saudi Arabia) not taking in any refugees? ISIS has even claimed it will use the mass migration to Europe phenomenon to infiltrate European countries with its members!

Clearly, there is whole lot more going on than meets the eye with this crisis. The media is hiding important facts about this mass migration to Europe. Why are EU politicians (like German Chancellor Merkel) pushing for a positive spin on the situation (Merkel was caught talking with Facebook founder Mark Zuckerberg, who admitted on a hot mic that FaceBook would be censoring anti-migrant posts)? 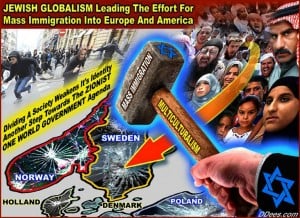 Artist David Dees highlights how mass immigration has been a Zionist tactic for some time.

Mass Migration is a Tool of the NWO

The NWO has long included schemes of mass migration (often marketed as multiculturalism) as a way to disturb and dilute the culture of the destination country. With a melting pot of new immigrants, it is far easier for the controllers of that society to push through restrictive legislation, because it is less likely to be opposed by new people who are still familiarizing themselves with the cultural and legal norms of that society. It also provides the controllers with a bigger pool of people likely to vote to increase the size of Government (e.g. for more State welfare) and a bigger pool of cheap labor too. As Jon Rappoport writes:

“The migration of populations is another key part of the overall op. For example, in Europe, the plan involves bringing in, quickly, so many people that communities are overwhelmed, and traditions and customs are swamped and lost. In other words, create a single de facto European population that dissolves all borders and differences.

Of course, this outcome is heralded as the triumph of equality, but that is a sham. That is the cover story. Mass migration has nothing to do with that.”

Think about it – who is in a better position to make change or influence politics: people who have grown up and lived in a country for most or all of their lives (and thus know the traditions, customs and laws), or new immigrants who are just trying to survive and build a new life in a foreign place? Which group is easier to hoodwink or manipulate? It is clear that a society trying to adjust to an influx of new immigrants is more focused on how to deal with the change than watching its leaders closely.

Knowing the character of the NWO manipulators, it seems clear that they are promoting mass migration to Europe as way to create strife, mayhem and division within Europe, so as to better further the power of the fascist European Union structure.

Forced, sudden, uncontrolled mass migration is not a celebration of diversity. It’s a deliberate attempt by world NWO manipulators to undermine certain nations and societies. 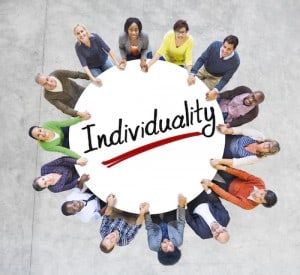 Migration only works if those migrating respect and try to adapt to the new culture.

Conclusion: We Can Only Unite if We Respect Our Individual and Cultural Differences

People knowingly and willingly coming together is a wonderful thing – but only if done with free will, in a way that still respects their inherent individual and cultural differences. There is a way the world can unite in respect, with admiration for our differences. The NWO agenda is all about the centralization of peoples and nations – of power – through force and coercion, and in a way which tramples upon and disregards the uniqueness of people and cultures. It is all about smashing down people to a certain level, boxing them into certain rigid beliefs and rules, and standardizing and homogenizing them like little cartons of milk so they are more easy to manage and exploit.

A One World Government based on this kind of coercion and homogenization will never work, because within each person lies the spirit of freedom, which demands to be given free choice, and calls out to be honored and respected for what it is. However, it is up to each of us to fully activate that spirit, because the degree to which we do not is the degree to which we allow worldwide tyranny to flourish.

Previous Article
A Tale of Two Leaders: Obama vs. Putin at the UNGA
Next Article
Who’s Living Whom? Bacterial Cells vs. Human Cells in the Body