The Unfortunate Fulfillment of the Israeli Mission Statement

The Unfortunate Fulfillment of the Israeli Mission Statement 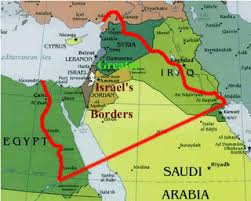 The Promised Land of Greater Israel? With the ongoing Palestinian genocide, we are seeing the fulfillment of the Israeli Mission Statement: grab all the land from the Nile to the Euphrates.

as far as we can tell from the uttered words of past and present Zionist leaders, as well as founding Zionist documents and the current Likud Party charter, seems to be pretty clear: take all the land from the Nile to the Euphrates. This is the “Promised Land” of “Greater Israel”. And the basis for this? That they are the chosen race, that God said it was their land and that their ancestors used to live there 3,000 years ago. And if anyone else happens to live there right now? Too bad: relocate or kill them. There has been so much suppresion, theft and killing done in the name of religion over the years, and the current genocide of the Palestinians by the Israelis is the latest manifestation we have to confront. With the new Israeli elections coming up, let’s take a closer look at the intentions of the Zionist state and the Israeli mission statement. 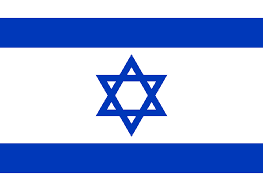 The Israeli flag is a good place to start. Flags in general are representations of nations, communities, families, etc. They are designed to symbolize something about the group they represent. Since they normally use no words, they are decoded by the right brain, not the left, and tend to bypass the conscious mind and go straight into the subconscious. Looking at the Israeli flag above, one must ask the question (as has been suggested by other researchers such as Andrew Carrington Hitchcock): “Do the strips of blue on either side of the flag represent the Nile and Euphrates rivers, and the star represent the Jewish kingdom, and therefore represent the Israeli mission statement to expand its borders to those rivers?”

Although the Star of David is associated with Judaism, it appears that the six-pointed star may actually have come from the Rothschilds – the owners of Israel, the richest family on the planet and at the heart of the global conspiracy to enslave mankind. Significantly, the six-pointed star contains an inner hexagram and represents Saturn, the god of time, harvest, tyranny and death. There is a definite connection between the elite families of the world and the worship of dark entities or gods (prominent among whom is Saturn) which fuel their black magic, although that is a subject for other articles.

It is not hard to find evidence from the mouths of Zionist leaders themselves, past and present, as to what constitutes the Israeli mission statement. The founding father of Zionism Theodore Herzl proclaimed that “the area of the Jewish State stretches from the brook of Egypt to the Euphrates.” Jewish Rabbi Fischmann stated that “the Promised Land (i.e. Greater Israel) extends from the river of Egypt up to the Euphrates. It includes parts of Syria and Lebanon.”

Here are some Zionist quotes (thanks to Mike Rivero of whatreallyhappened.com for compiling these):

A Christian state should be established [in Lebanon], with its southern border on the Litani river. We will make an alliance with it. When we smash the Arab Legion’s strength and bomb Amman, we will eliminate Transjordan too, and then Syria will fall. If Egypt still dares to fight on, we shall bomb Port Said, Alexandria and Cairo … and in this fashion, we will end the war and settle our forefathers’ account with Egypt, Assyria, and Aram.

It is the duty of Israeli leaders to explain to public opinion, clearly and courageously, a certain number of facts that are forgotten with time. The first of these is that there is no Zionism, colonialization or Jewish State without the eviction of the Arabs and the expropriation of their lands.

The only solution is Eretz (Greater) Israel, or at least Western Eretz Israel [all the land west of Jordan River], without Arabs. There is no room for compromise on this point … We must not leave a single village, not a single tribe.

We declare openly that the Arabs have no right to settle on even one centimeter of Eretz (Greater) Israel … Force is all they do or ever will understand. We shall use the ultimate force until the Palestinians come crawling to us on all fours.

The Israeli Mission Statement is Basically the Same, No Matter Which Party is in Power

This article on the Electronic Intifada (intifada the Arabic word for “uprising”) outlines how Israel’s intention is to overtake Palestine, no matter whether the Labor, Kadima, Likud or any other party is in power. Here are some of sections from the Likud Party chapter (the current ruling party headed by Benjamin Netanyahu):

Self-Rule: The Government of Israel flatly rejects the establishment of a Palestinian Arab state west of the Jordan river. The Palestinians can run their lives freely in the framework of self-rule, but not as an independent and sovereign state. Thus, for example, in matters of foreign affairs, security, immigration and ecology, their activity shall be limited in accordance with imperatives of Israel’s existence, security and national needs.

Jerusalem: Jerusalem is the eternal, united capital of the State of Israel and only of Israel. The government will flatly reject Palestinian proposals to divide Jerusalem, including the plan to divide the city.

The Jordan River as a Permanent Border: The Jordan Valley and the territories that dominate it shall be under Israeli sovereignty. The Jordan River will be the permanent eastern border of the State of Israel. The Kingdom of Jordan is a desirable partner in the permanent status arrangement between Israel and the Palestinians in matters that will be agreed upon.

Security Areas: The government succeeded in significantly reducing the extent of territory that the Palestinians expected to receive in the interim arrangement.

The language is clear and strong: Israel is a Jewish state in word and deed, which will aim to assert complete sovereignty over the current land area of Israel and beyond. Any attempt by the Palestinians to assert their own statehood or sovereignty will not be tolerated. As Jonathan Weiler and many others have pointed out, the Likud Party has never accepted a Palestinian State in its charter.

The situation of Israel and Palestine is one of mythology (“our ancestors used to live here”) vs. fact (“we live here now as our own nation”), yet somehow natural rights, logic and factual evidence don’t seem to be worth much for the Palestinian cause, given that Israel has its agents in all the powerful governments of the world, including the US, UK, Canada, Australia and others.

How Much Longer Will the World Take It?

Zionist leaders are trying like crazy to fulfill the Israeli mission statement, ignoring numerous UN resolutions against Israel, and committing all sorts of war crimes such as bombing Palestinian civilians, limiting the caloric intake of Gazan Palestinians and bombing UN schools (that one was even too much for the US to take). I wonder: how much longer are we going to accept this genocide happening right before us?