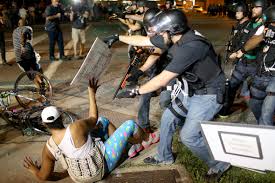 Ferguson social engineering: the Ferguson protests are being “managed” by the elite to divide & distract, and incite violence to justify the Police State.

Ferguson social engineering has broken out!

The social engineers have chosen Ferguson, Missouri as a place to test their latest distraction and “divide-and-conquer” techniques. Sadly, Ferguson erupted into riots, fires and violence after the public announcement last Monday night that the jury had decided policeman Darren Wilson would not be charged with manslaughter relating to the killing of black teenager Michael Brown. The whole town has slipped into lawlessness and violent chaos, with police warning residents that they (the police) would not be able to protect them, and advising citizens to buy guns to defend themselves. As much as I can understand people’s desire to stop all forms of oppression (whether it be racism or police brutality), this whole situation is being manipulated to make people’s attempts to get real change as ineffective as possible. It’s setting people against each other and making everyone in the town feel unsafe. It’s redirecting people’s rightful rage in a way that will only get themselves or other innocent people hurt, without correcting any real injustice.

This whole phenomenon is Ferguson social engineering. Consider the following:

Ferguson was clearly chosen as a way to divide the nation further, and as an excuse to bring in the police state. It’s a deliberate gray area (we don’t know all the facts, especially whether it was genuine self-defense or not). It’s a topic where both sides feel justified and right (like abortion), so it is being exploited by the elite to set people against each other. Be aware of the whole Ferguson social engineering phenomenon.