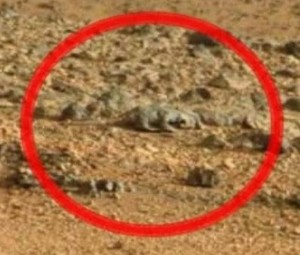 A reptile on Mars? This NASA photo clearly shows a Martian lizard. Is it native to Mars, or was it put there? If it was introduced, who placed it there?

Reptile on Mars? Apparently so.

The NASA photo above shows some kind of creature that resembles a lizard on the surface of Mars. This is not the first time a reptile has been spotted on the surface of the red planet. Andrew Basiago is a whistleblower who came forward years ago and announced that he had been part of a secret operation involving time travel. Basiago claims he was part of DARPA’s Project Pegasus during the period 1969-72, and that he was teleported across the US, and what’s more, also teleported to Mars! You can hear his account in the DVD Mars Gate. Basiago has also given presentations where he showed other anomalies on Mars, including humanoid beings and reptilian art statues. It sounds bizarre, but the photographic evidence backs up what he is saying.

If there’s a reptile on Mars, was it put there, or is it an organic Martian species?

If there’s a reptile on Mars, this of course raises the question of whether it is native to that planet or not. If it has been placed there for some reason, that may indicate that certain factions of humanity (e.g. those running the Secret Space Program) have already been to Mars, and may even be using it for their operations, despite what the general public have been told. Or, the lizard may have been placed there by other advanced beings – extraterrestrial aliens. If the lizard is a native Martian species, then there is life on Mars, again despite what we have been told. Either way, the implications are quite staggering.

Reptiles are a lifeform clearly not just limited to Earth. Even mammals such as ourselves have a reptilian brain (the amygdala) which is responsible for emotions and the fight-or-flight response. There’s a reptile in each of us. There is a lot of proof that advanced reptilians ETs also exist. If we want to understand Who We Really Are and the true, hidden history of humanity, we will have to explore and come to terms with the reptilian influence and reptilian agenda.

Previous Article
One Mega Corporation to Rule Them All …
Next Article
How to Detox Fluoride: Nascent Iodine