One Mega Corporation to Rule Them All …

One Mega Corporation to Rule Them All … 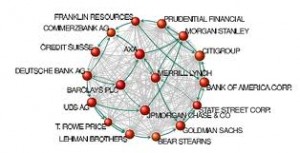 A core group of 147 TNCs sits at the center of global ownership. It itself is 3/4 owned by financial intermediaries, constituting one mega corporation.

One mega corporation owns and controls just about everything

you can think of, as it turns out. Researchers S. Vitali, J. B. Glattfelder and S. Battiston put the common intuition – or conspiracy theory – that the world economy is dominated by a small group of corporations to the test. They collected and analyzed data concerning the ownership of large corporations, specifically Transnational Corporations (TNCs). The results were staggering. What they found – after meticulously connecting all the dots and figuring out who owned what in the Network of Global Control – was that a core group of 147 TNCs accounts for around 40% of the global economy.Three quarters of this core are financial intermediaries. The network of ownership relations is highly complicated, but one can consider the top holders as one mega corporation. Turns out the centralized control is not conspiracy theory, but rather, conspiracy fact.

One mega corporation in commerce and politics …

In the world of commerce, we are led to believe there is competition in the marketplace, whether we are buying food, gasoline or anything else. In the world of politics, we are also led to believe that our votes really count and that it really matters who we vote for. In both cases we have been massively deceived. People paying attention to politics have known for a long time now that we have a false left-right paradigm, designed to divide and conquer a population, and given them a fake sense of control.

Politicians on either side of the fence have been selected and groomed for leading roles by the Shadow Government; a case in point is Barack Obama, who many have said is like Bush on steroids. While publicly campaigning against many of George W. Bush’s policies, Obama has proceeded to not only maintain them, but actually increase them. This can be seen in his acceleration of Middle Eastern wars (Pakistan, Afghanistan, Libya and Syria), his aggressive prosecution of whistleblowers and his role in signing off on new legislation that strips the rights of ordinary people (e.g. the NDAA which allows the US Government to indefinitely detain any American without due process in direct violation of the 4th Amendment).

There is one agenda – the push towards a totalitarian, militaristic New World Order (NWO) – and both sides merely advance different aspects of it during their brief terms in power.

If there is one mega corporation, then is there such a thing as competition?

Likewise in economics, control has become so centralized at the top that we are living in a global monopoly, or at least a global oligopoly. It may seem like we have all these brands, colors and flavors to choose from, but at the end of the day, it’s getting sucked up to the upper echelons of the NWO pyramid into the hands of the international banking cartel. Primary among this cabal are the illustrious Rothschilds, of course, who own practically every central bank on the planet, with a few exceptions (Syria, Iran, Russia and China). This banking cartel owns the financial intermediaries at the core of the 147 TNCs mentioned in the study above. It’s one mega corporation, essentially.