Do Reptilians Exist? Various Points of Evidence for Alien Reptilians or Reptoids

Do Reptilians Exist? Various Points of Evidence for Alien Reptilians or Reptoids 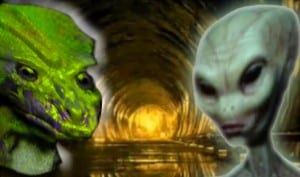 Do reptilians exist? Even alternative researchers often can’t accept the idea, but the evidence is very strong that an ET reptilian species exists on Earth.

There are many in the alternative research community and truth movement who, even though they are open minded in many areas, still cannot accept the idea that an extraterrestrial reptilian species really exists. However, the evidence is very strong that they do exist, and moreover, that they have been on Earth a long, long time and have even entered into agreements with various governing bodies (especially the US Government). Do reptilians exist? I say yes – and let’s take a look at the proof.

Do Reptilians Exist? Yes, According to Multiple Independent Eyewitnesses

Many ex-military people (and current ones too) have spoken in public about the chain of command within the military. In a recent Project Camelot interview, super soldiers Michael Prince (formerly James Casbolt) and Max Spears talked about how reptilians occupied the positions at the top of the hierarchy. These are men who were mind-controlled as children and have been in highly secretive black military operations for decades, and who know that world very well.

Arizona Wilder is another mind control victim who broke her programming and went public. She was used as a sex slave and priestess at Illuminati Satanic rituals. You can watch her story here and here; she affirms that reptilians exist and are linked to the Illuminati (the ruling elite families).

Do Reptilians Exist? ET and UFO Researchers Confirm So

Barbara Lamb is an amazing ET/UFO researcher who has documented hundreds of case studies where people had an interaction with an extraterrestrial reptilian. Lamb herself had such a being appear in her living room! Many of her cases revealed that reptilians could treat humans kindly; in one case a mother who was reunited with her hybrid reptoid son! James Bartley is another superb researcher who has studied the reptilian phenomenon in depth and has come to understand their behavior very well – the same type of behavior as you would expect from a reptile on Earth (like a snake or crocodile): aggressive, territorial, hierarchial, coldblooded and based on instinct/reaction (rather than logic or reason).

Jordan Maxwell is a longstanding researcher whose has gone deep into the rabbit hole concerning religion, the occult, the banking system and other areas. In this interview, Maxwell states that reptilians do exist, and recalls a story he was told, where a family was out hiking in the wilderness in Colorado, and stumbled upon a circle of reptilian beings performing some kind of ritual. They were muscular and taller than the average human – perhaps 7 foot tall. The family was up high above them, however suddenly, in defiance of rational explanation, one of the reptilian beings appeared very close to them. This being was aggressive, menacing and looked nasty. The family got out of there as fast they could and escaped unharmed. Maxwell explains that based on his experience he had every reason to believe the story was true.

David Icke hardly needs an introduction when it comes to the subject of “do reptilians exist”! This incredible researcher has been ridiculed and criticized to the hilt for connecting the dots of the global conspiracy and daring to go where the information took him – regardless of what others thought. Icke stumbled upon person after person who relayed to him their personal account of running into reptilians. The accounts are well documented in his 2001 book “Children of the Matrix”, and span the gamut from friendly, positive encounters (including those of a sexual nature) to scary, dangerous ones (including rape). Some of these accounts included famous people (e.g. Princess Di) who had personally seen members of the British Royal Family shapeshift – change from human form to reptilian form.

To ask “do reptilians exist” is also to ask “what are shapeshifters”? Icke managed to unravel the thread of clues and symbolism showing that the so-called royal families of Europe were direct bloodline descendents from earlier ruling families in Rome, Egypt and ultimately – Babylon/Sumeria. Thus, the story of reptilians is not only the story of a separate species of beings from other planets or other dimensions, it is also the story of how certain bloodline families on this planet have interbred with reptilians and now have a kind of hybrid DNA. This hybrid DNA means they can assume a human form or reptilian form, and as Icke explains, often during moments of extreme emotion, the human form breaks down and the reptilian form emerges.

This is what Arizona Wilder, Princess Di and others experienced during the Satanic rituals of the Illuminati and royal families.

In the Reptilian Agenda, David Icke interviews Zulu shaman Credo Mutwa, who tells cultural stories of how an ET reptilian race seeded modern humanity. Although rationalistic and close-minded modern science views myths as fairy tales, myths are actually distillations of the truth, told and retold over generations. Interestingly enough, the Dogon tribe tells a similar story that they were visited by reptilian ETs. Despite being technologically undeveloped, the Dogon knew things about our solar systems and other solar systems that modern science has only just been able to confirm.

If you are still in doubt over the question of “do reptilians exist?”, approach the topic with an open mind and do your own research. The Universe is far bigger and stranger than you imagine!

Previous Article
Are You a Terrorist? US Government Frames Ordinary People As Domestic Terrorists
Next Article
Bankers’ Wars: Target Syria