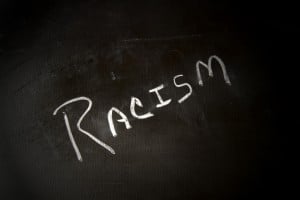 Racism is a problem is many places, but the racist Israeli society brings racism to new depths. Racism by Jews against Arabs & Africans is socially acceptable & cool; the Israeli Jews partaking in it have absolutely no shame about openly declaring their hate.

The racist Israeli society is coming to be exposed

as more and more people are looking through the Zionist propaganda. When you hear and read the shocking opinions, declarations and edicts of a vocal segment of Israeli society – from ordinary citizens to politicians to rabbis – calling for the “expulsion” of the “infiltrators”, you can see why Israel is described as an apartheid nation. Many countries in the world still struggle with racism, but there is something especially egregious about the racist Israeli society. The racism there is condoned and promulgated at the highest levels.

To deconstruct racism, it is the false idea that one race is somehow superior to another, purely on the basis of genetics, such as skin color. Many of us have fallen into the trap of thinking this way at some point in our lives, but the truth is the human genome is identical, regardless of whether you are Caucasian, Asian or Negro. Racism stems from a feeling of superiority or supremacy. This has been very notable in white man as he has colonized the world, especially in places like South Africa, Australia and the US. It was at its worst in the eugenics-based racial purity ideals of the Nazis. However, this idea of supremacy runs through certain segments of Judaism also.

The Jewish Brand of Supremacy

The Jewish brand of supremacy is a little different, in that it is based on the idea that possessing “Jewishness” makes you superior. What that is exactly is unclear, because several famous Jewish historians, such as Arthur Koestler and Shlomo Sand, have both written academic books theorizing with great evidence that there is no such thing as Jewish DNA. It is a myth. This has staggering implications for Zionism, of course, because with no Jewish DNA comes the conclusion that modern day Israelites have no historical claim to the piece of land they effectively robbed from the Palestinians. That aside, it also makes you wonder about Jewish supremacy. If Jewishness is based on converting to Judiasm, i.e. faith, and not genetics, then couldn’t anyone automatically become superior just by believing in the “right” God?

David Sheen in his Russell Tribunal presentation reports one Israeli who organized a “Death to Arabs” protest, stating the following:

“Hitler was right but about the wrong nation. We are the chosen race.”

Shocking Israeli Racism Against the “Infiltrators”

Watching the video clip above made me recoil in horror when I saw just how vicious some Jews are being to black Africans who have immigrated to Israel. You might have thought that these foreigners would be welcomed to Israel to bolster the population, but instead, these foreigners are labeled “infiltrators” and are feared and hated. In the clip above at the 1:05 mark, you can see Israeli citizens calling for the unwanted foreigners to be “rounded up.” Later, an Israeli woman declares that she can see in the foreigners’ eyes that they want to murder her, and that she is proud to be a racist – accompanied by loud cheers. A lone Israeli woman who protests against the racism is herself verbally accosted with scorn and abuse, with people cursing her: “May you be raped! Amen!”According to Max Blumethal and David Sheen, these kind of feelings and outbursts are very common throughout Israel. This Anti-African sentiment leads to Anti-African rallies – which inevitably turn violent. At the end of some of these rallies, certain Israeli citizens, no doubt whipped up into a frenzy of rage by the racist speech of their politicians, went and attacked Africans.

Jewish Racism Against Africans and Arabs is Socially Acceptable in Israel

Both Africans and Arabs are at the wrong end of the barbed attacks. Racism is completely socially acceptable in Israel. It’s fine for common Israeli people to state out loud how much they hate Arabs. In fact, many people consider it cool. Many of these proclamations make the rounds on social media (Facebook, Twitter, etc.). The aforementioned Russell Tribunal presentation by David Sheen includes many examples, such as:

“A young Arab’s body was found charred in a Jerusalem forest. I want to marry whoever did it.”

Some Israeli parents are even putting signs on their babies with racist messages against Arabs, such as the shocking mindset prevalent in the racist Israeli society. Many of these racist Israelis Jews have absolutely no shame.

It appears that quite a lot of politicians either think the same way or are deftly exploiting the xenophobia to their advantage to boost their popularity or get re-elected. Michael Ben-Ari, Knesset member, 2009-2013, is, according to Sheen, one of the most outspoken. Eli Yishai, Interior Minister from 2009-2013, demanded the “tools” to expel all the “infiltrators” within 1 year. Interior Committee Chair Miri Regev commented that “the Sudanese are a cancer in our body.” Deputy Defense Minister Danny Danon said “the biggest problem in the State of Israel is the Arabs of Israel.” Yulia Belkovich, former Kadima Knesset member, called for Africans to be locked up in prison alongside asylum seekers.

One aspect of this issue which sets it apart from racism in other countries (such as the US or Australia) is the influence of religion and esteemed public figures. Hundreds and hundreds of Jewish rabbis have gone, and continue to go, on the public record, openly encouraging racist behaviors, from not renting to Goy (Gentiles or non-Jews), to raping Goy women, to killing Goy:

“There is justification for killing (Palestinian) babies, if it is clear that they will grow up to harm us.”

“Goyim (non-Jews) were born only to serve us. Without that they have no place in the world.”

Are you beginning to fathom the shocking extent to which some Israelis labor under this massive delusion of Jewish supremacy, that they would advocate the killing of non-Jews, and believe that the only reason for the existence of non-Jews is to serve Jews? Are you beginning to see the tremendous danger posed by the Jewish brand of fundamentalist religion?

A Jewish State or a Democratic State? The Inherent Contradiction

Israel consistently declares that it is the “only democracy in the Middle East”, and Zionist-controlled US also uses this claim to justify its unwavering support of Israel even in the face of Zionist genocide of Palestinians. Yet, Israel is nothing like a democracy. The ruling party Likud party does not want to lose its grip of power; it wants to fulfill Israel’s mission statement. Those controlling Israel want Israel to be Jewish in fact, yet democratic in appearance.

Why am I focusing on the racist Israeli society when there is racism in many places in the world? Because I think it’s very important people understand:

1. the danger that Zionism poses to the world;

2. the danger that Jewish supremacy poses to the world;

3. the danger that all types of fundamentalist religion pose to the world;

4. the shocking hypocrisy of Israel when it claims it is more “civilized” than Arab nations;

5. the astonishing lack of shame some Israelis have in openly promoting racial hatred and murder;

6. the fact that, beneath all of this, the Rothschilds own Israel, which ties the attitudes and purpose of Israel intimately to the global conspiracy.

Previous Article
Another Day, Another False Flag
Next Article
The Truth Behind Obama’s State of the Delusion Speech