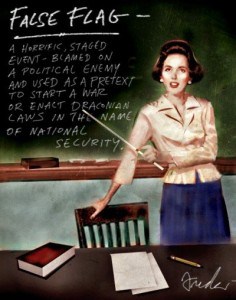 The elite have been using false flag attacks for 100+ years to start wars and consolidate power; now they’re being used more and more to destroy our freedom.

False flag operations, it is no exaggeration to say,

are a dominant theme of the true history of the world in the last 100 years, and probably far more. The recent French false flag operation of Charlie Hebdo is just the latest in a long string of incidents. Once you critically research textbook history, question the official narrative and begin finding alternative facts, explanations and theories of significant world events, you realize what we were told about almost every major event of the 1900s was a lie. The 20th century reads like an epic poem of false flag operations, and yet the 21st century, although only 16 years long, is already churning out such a steady supply of false flag ops that it may well surpass it!

Given the shocking preponderance with which the false flag shootings and attacks – across the globe from Norway to Australia to the US to France – just keep rolling on, one must assume that the false flag op has become the favorite weapon of the controllers. Broadly speaking, most of the general public are still oblivious to the possibility and real perpetrators of false flags ops, although there are positive signs that a critical mass is beginning to understand the concept, as recorded by Google Trends’ searched terms.

False Flags are Part of the Problem-Reaction-Solution Tactic

The definition of a false flag op, originally a military term, is an operation carried out by a group or agency and made to look as though as was someone else (like a political or military enemy), so as to derive sympathy for the perpetrator and incite hatred against the framed party. It’s part of a larger tactic which David Icke calls “Problem-Reaction-Solution“, i.e. you create a problem, then you incite and manipulate a certain reaction, and finally you introduce the “solution” (the thing you wanted to do all along). This same phenomenon has also been identified by philosophers such as Hegel, who spoke of “thesis-antithesis-synthesis”, and by the Illuminati and Secret Societies, some of whom have as their motto “Ordo Ab Chao”, which is Latin for “order out of chaos”. It’s all the same idea: create chaos and disorder, stir up people’s anxiety and fear to disrupt them from thinking rationally, then exploit their irrational state to push forward an agenda they normally would have opposed. As Rahm Emanuel said, “You never want a serious crisis to go to waste”. This is how the manipulators think.

False Flags Used Over and Over, Again and Again

False flags are everywhere throughout history. Well before 9/11, the grand-daddy of them all, we had the sinking of the Titanic in 1912, which evidence shows was most likely a Morgan-Rockefeller-Rothschild conspiracy. Then, we had the sinking of the Lusitania in 1915, a pretense for the US to enter WW1. Likewise, we had Pearl Harbor in 1941, another false flag known in advance by Roosevelt so the US could enter WW2. Hitler is reported to have used the false flag method in the Reichstag fire of 1933 (to demonize the Jews) and in the Gleiwitz (Polish border) incident of 1939 (to justify an invasion of Poland). The US was at it again with the Gulf of Tonkin incident of 1964 to justify the Vietnam War. Israel joined the party with its false flag attack on the USS Liberty in 1967. NATO conducted Operation Gladio false flag ops in Europe throughout the 1980s. On the domestic front inside the US, the Oklahoma City bombing was clearly a false flag attack for which patsy Timothy McVeigh took the fall.

It is astonishing to read the list of 21st century false flag ops only 16 years in:

– the Bali bombings in Indonesia of 2002

– the Boston Marathon bombing of 2013

Knowing all of the above, are we expected to truly believe that the horrific shootings at Charlie Hebdo are due to “Islamic terrorism”, and not a US-UK-Israeli false flag operation to demonize Islam and stoke the fires of war? Consider the following:

1. Why did the police investigator in charge of the case mysteriously commit suicide?

2. Why did the mainstream media report this policeman’s head was shot, when video proof shows the bullet missed and hit the pavement instead? Why was there no blood?

3. Why did the “terrorist” on his way escaping stop to pick up a random shoe?

4. Why did the purported “terrorists” execute so professionally and then make the mistake of leaving behind ID in the getaway car? Reminds me of the magical passport that escaped raging office fires on 9/11.

5. If Islamic leaders were so outraged by the cartoons at Charlie Hebdo, why not bring a lawsuit against them? Killing them only serves to galvanize people against Islam.

Will the elite keep using false flags? The answer is yes – until it becomes an ineffective tactic. The controllers are psychologically addicted to power, and will do anything to keep it. As long as they keep fooling enough people, they’ll keep carrying out false flag ops. And, as technology advances, we have to be on guard that the false flag attacks will become increasingly sophisticated, incorporating things like holograms, where the average person will be very hard pressed to distinguish the difference between the real and the fake. Project Bluebeam has been discussed on conspiracy sites for years as a long-term goal of the elite.

On the positive side, however, it is clear to see that more and more people are seeing right through these attacks right from the start, so I believe there will come a point – hopefully soon – where a critical mass of people are not deceived and consciously reject the official narrative. When that time arrives, it will be a very interesting time for the controllers indeed to try to retain power, given their blatant crimes against the people and humanity in general.