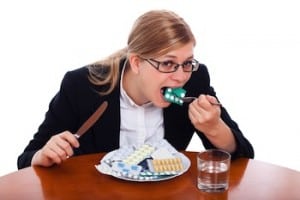 The out-of-control growth of fictitious mental illness, and the associated rise in psychiatric drug use, is creating people who are permanently disabled and hooked for life.

increasingly applied to many people all over the world in the last few decades, thanks to the unholy alliance between Psychiatry and Big Pharma. The trend is shockingly apparent in America, but it’s happening all over the globe. For the most part, ordinary people with ordinary feelings of ups and downs, highs and lows, are being told there is something wrong with them, that they are “mentally ill“, and that they need psychiatric medication. These days, if you occasionally feel down or depressed, watch out: Big Pharma is targeting you for its latest mind-altering chemical concoction.

What is Psychiatric Medication?

First of all, let’s define what is meant by psychiatric medication. It is a synthetic drug, designed to treat mental illness, which has a psychoactive effect, i.e. it alters the chemical makeup of your brain and nervous system. These include:

– Antidepressants (such as the common SSRI drugs like Prozac, Paxil, Celexa and Zoloft);

– Antipsychotics (such as Abilify);

– Stimulants (such as Ritalin or methamphetamine);

– Anxiolytics (such as Valium);

The Rise of Psychotropic Drug Use

Psychiatry Uses Behavior and Peer Consensus, Not Symptoms, As Basis for Diagnosis

The DSM (Diagnostic and Statistical Manual) of psychiatry is a listing of all known psychiatric diseases. Yet did you know that all the listed diseases are arrived at by voting and peer consensus? The diagnostic criteria are voted into existence. This is politics, not science.

Psychiatrists have yet to conclusively prove that a single mental illness has a biological or physical cause, or a genetic origin.

Let’s pause for a minute on that one. The implications are staggering.

The DSM uses behavior, not physical and measurable symptoms, as the basis for its diagnosis. It does not determine whether someone is mentally ill, or suffers from mental illness, by standard diagnostic tests such as a blood test, saliva test, urine/stool sample, x-ray, brain scan or chemical imbalance test. It has admitted as much through numerous channels:

“There are no objective tests in psychiatry-no X-ray, laboratory, or exam finding that says definitively that someone does or does not have a mental disorder.” — Allen Frances, Psychiatrist and former DSM-IV Task Force Chairman

“There is no definition of a mental disorder. It’s bull. I mean, you just can’t define it.” — Allen Frances

“There is no blood or other biological test to ascertain the presence or absence of a mental illness, as there is for most bodily diseases. If such a test were developed … then the condition would cease to be a mental illness and would be classified, instead, as a symptom of a bodily disease.” — Dr. Thomas Szasz, Professor Emeritus of Psychiatry, New York University Medical School, Syracuse

Busting the Idea of a “Chemical Imbalance”

For decades psychiatrists have claimed that mental disorders are the result of a “chemical imbalance” in the brain. But what does that mean exactly? Is there one perfect chemical balance or standard of health by which they measure disease? If so, what is it? What are the perfect levels of every chemical and hormone we must have to be “mentally sound”? Clearly it would be impossible to define this, so what are the ranges? Wouldn’t the range depend on many factors such as age, gender, environment, etc.? Who decides when someone’s chemical level leaves a certain range and becomes pathological? What is the basis for this?

Too many questions, and not enough good answers.

In truth, the idea of a “chemical imbalance” underpinning “mental illness” is really an attempt to try to make invented psychiatric diseases sound scientific. Listen to the words of some of the doctors below discussing psychiatry:

“At present there are no known biochemical imbalances in the brain of typical psychiatric patients—until they are given psychiatric drugs.” — Peter Breggin, Psychiatrist

“While there has been no shortage of alleged biochemical explanations for psychiatric conditions…not one has been proven. Quite the contrary. In every instance where such an imbalance was thought to have been found, it was later proven false.” — Dr. Joseph Glenmullen, Harvard Medical School psychiatrist

“Virtually anyone at any given time can meet the criteria for bipolar disorder or ADHD.  Anyone.  And the problem is everyone diagnosed with even one of these ‘illnesses’ triggers the pill dispenser.” — Dr. Stefan Kruszewski, Psychiatrist

The bottom line in all of this is that mental illness is essentially an invented disease. If there is no way to prove that anyone has it, through the normal means of a blood test, saliva test, urine/stool sample or any other standard diagnostic test, how do we know it even exists as an illness or phenomenon? Without any scientific or objective way to test the label of mental illness, how can we know that doctors are not unintentionally – or intentionally due to bribery – falsely diagnosing people and turning them into patients?

At one point homosexuality was considered a mental illness. It has since been voted in and out of existence.

Now, in fairness to Western Medicine and Big Pharma, there are undoubtedly people who need mental help. But how we can trust doctors and psychiatrists to tell us who they are, when bribery and corruption is so rife in the industry, and billions of dollars are at stake?

Not so long ago, psychiatrist Leon Eisenberg confessed on his deathbed that ADHD (Attention Deficit Hyperactivity Disorder) was a fictitious disease. Yes, he admitted that “ADHD is a prime example of a fictitious disease.” Due to this deception, millions of children have forced to ingest the psychoactive drug Ritalin (chemically similar to amphetamine or speed) with a slew of dangerous side effects such as heart palpitations, headaches, stomach aches, nervousness (including agitation, anxiety and irritability), insomnia, decreased appetite,  nausea, dizziness and addiction. It’s legal speed – so of course it’s addictive.

We can only hope that when enough people become aware of Big Pharma’s attempt to pathologize normal behaviors, they will seek other means to heal any mental disturbances they are experiencing, especially by the tried-and-tested psychotherapy (counseling), which is completely non-invasive.

And lastly … did you ever wonder why the elite through (Big Pharma/Psychiatry) are so focused on mental illness? To get normal people on pills and/or locked up, but also to institute a system by which dissenters and free thinkers can be declared mentally ill or unstable and be “legally” removed from society.

The difference between a medical diagnosis and a psychiatric diagnosis