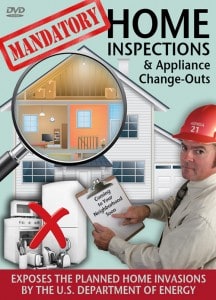 Climate Action Plans (CAPs) are part of the Agenda 21 strategy. Mandatory home inspections or “audits” and appliance change-outs may be coming soon to your neighborhood.

Climate Action Plans are the latest

installment of the global manipulation program known as Agenda 21 (see the article How Would You Like to be Forced into a Human Habitat? for an overview of Agenda 21). Agenda 21 is the blueprint for world domination. It shows how the world is planned to be sneakily overtaken under the green-hued guise of saving the environment and sustainability. Its origins can be traced way back to New World Order Round Table groups like the Club of Rome, where the elite controllers decided that the only way to get humanity to fully cooperate with its own enslavement would be to introduce a fake enemy – manmade global warming/climate change, but on a deeper level, humanity itself – against whom we all must rally. In this way they are getting people to feel guilty just by being alive and breathing, to acquiesce to accepting more austerity, poverty and limitations, and simultaneously encouraging the masses to police themselves by offering rewards for those who spy and snitch on their neighbors.

What are Climate Action Plans?

Climate Action Plans (CAPs) are the strategies publicly promoted by Governments, in which they create the appearance of doing something useful (e.g. protecting the environment) while systematically stripping the rights of their People and centralizing control of power. There may be some good points to them – for instance, they may encourage people to grow more locally, to re-use and re-cycle more, etc. – but the sinister intent behind it all is to restrict and control humanity’s energy usage down to the last milliwatt. Climate Action Plans are based on numerous fallacies, including the notions that:

a) The Earth is undergoing global warming;

b) Mankind is responsible for global warming, or as it has been rebranded, “climate change”;

c) Carbon dioxide is a toxin.

You can see Obama’s CAP on this fact sheet on the official White House website, where his administration writes that we need strong laws limiting “carbon pollution—just like we have for other toxins like mercury and arsenic”. This is scientifically insane, because the implication is that carbon dioxide is a toxin like mercury or lead, whereas in truth it is an essential nutrient for all plant life on Earth. Since Agenda 21 is a global scheme, Climate Action Plans are also global (e.g. they are occurring in Russia and China); the EPA is in charge of rolling them out in every American state.

Deborah Tavares (StopTheCrime.net) is doing a great job exposing Agenda 21, Climate Action Plans and all that comes with them, including ICLEI (Internation Council for Local Environmental Initiatives). ICLEI is promoting “energy star appliances” but guess what – these energy star rated appliances do not manufacture anything in gas, and since Agenda 21 rules dictate that you must use an appliance which conforms with their ratings, you may not be allowed to have propane or other gas in future for your house! Just as Al Gore is making millions (or billions) off the carbon trading scheme he promotes (by pushing the manmade global warming agenda), so do the energy companies by star rating appliances, and who are working hand in hand with Agenda 21.

These star rated appliances, by the way, contain RFID microchips – part of the planned Internet of Things by which all devices and machines in your house are to be connected in the SMART grid. Your home is going to be given a rating, just as cars have MPG ratings.

And what if you can’t afford to implement all the changes proposed by the DOE (Department of Energy) during their mandatory in-home energy audits? According to Tavares’ research, the Agenda 21 technocrats have arranged for “green loans” to be given to people, at 7% simple interest, to force them to pay for the “upgrade”!

We are facing nothing less than a plan to totally regulate, restrict and control the energy usage of the entire world citizenry. The Climate Action Plans are part of a strategy of carbon rationing. Under this scheme everybody would get an “allowance” of carbon they could use for their needs, not just energy, but also food, travel and entertainment. Everything would have a carbon tag attached. You would have to swipe your carbon card every time you purchased anything – with the ultimate idea to microchip everyone.

Watch out for any Climate Action Plans, in-home energy audits or mandatory appliance change-outs in your neighborhood.