Humanitarian Intervention is an Oxymoron

Humanitarian Intervention is an Oxymoron 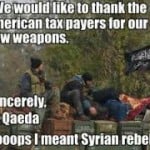 Humanitarian intervention is an oxymoron; you can’t “humanely intervene” with bombs and missiles to destroy and kill. It’s a pretext to make war palatable for public consumption.

Humanitarian intervention is an oxymoron.

Like military intelligence. Like voluntary compliance (a favorite one of the IRS, a private Puerto Rican trust and collection agency masquerading as a lawful agency of the US Government). With a war in Syria a distinct possibility looming on the horizon, the public is again being fed the propaganda that the US cares so deeply about the fate of innocent people in foreign lands that it will bravely and reluctantly step in to uphold international law and decency. In fact, just the opposite is true: the US is showing itself to be international terrorist #1, an aggressive bully building a global Empire, with around 900 military bases worldwide. Just look at the US history of aggression and invasion! It isn’t about humanitarian intervention; it’s about totalitarian intervention.

The best propaganda has portions of truth

The most effective propaganda is a mixture of truth and falsehoods. If something is outright false, many people will reject it; but if it contains some truth to pull people in, many will overlook the lies surrounding the truth and buy the whole thing hook, line and sinker. The idea of humanitarian intervention and R2P (responsibility to protect) sound so noble at first glance. However, once you start to investigate humanitarian intervention, you find that it’s a doctrine of convenience used by Western powers to invade and overthrow countries and leaders who don’t play ball with the Western hegemony. If the US Government really cared about innocent women and children being oppressed by cruel dictators, why do they fund those really regimes? Or why does it turn a blind eye to it in countries that have no oil, resources or geopolitical significance?

With US Secretary of State (and secret society Skull ‘n’ Bones man) John Kerry coming out and claiming that Syrian President Assad used chemical weapons, you have to be amazed not only at the sheer mendacity (the Russians have gathered evidence showing it was the Western/Israel backed rebels who did it), but also at the sheer audacity of such a claim. Do Obama and Kerry really think no one would notice the fact that the US used chemical weapons in Iraq in the last 10 years? That a US company Monsanto developed DDT and Agent Orange and sprayed it all over the Vietnamese? That the US went beyond chemical weapons and used nuclear weapons (in the form of depleted uranium [DU] missiles in Iraq) as well? Where is the “red line” for this kind of behavior?

Humanitarian intervention is a sham. It’s a contradiction in terms. And, judging by the British people and the vote in Parliament, as well as the polls in America, the people aren’t falling for it.

Previous Article
The Gay Agenda is Not a Big Part of the Conspiracy
Next Article
9/11 Anniversary #12: Top 12 Loopholes in the Official Narrative