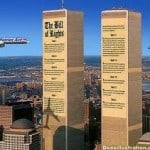 9/11 Anniversary #12 – polls show the public is waking up and questioning the official story. Was the Bill of Rights the real target that day?

Another 9/11 anniversary is upon us

– this time number 12 – so I thought I would put together a list of the top 12 loopholes in the official narrative, framed as questions. Some might wonder what the point is in revisiting the past. However, there is no doubt that 9/11 changed the world, and instilled fear into the minds of many, not just Americans. It was more than an inside job. It was more than a false flag staged terror event. It was a mass ritual, designed to generate a massive amount of intensely negative energy and scare people into giving up their freedom for the illusion of security (a favorite trick of tyrants). It introduced the idea of terrorism and launched the fake war on terror which is still used today as a pretext for war. Maybe this 9/11 anniversary more people will begin to question what really happened that fateful day. Polls from Rethink911 show that indeed this 9/11 anniversary things are turning around.

We’re supposed to believe that 19 men working from an underground cave in a 3rd world country had the technological prowess and superiority to outmaneuver the most militarily advanced nation on Earth – whose planes and defense systems are funded by the billions by state of the art computers! And that they had no help from the inside!

Click here for the detailed evidence that 9/11 was an inside job. Keep questioning the world around you. Think critically – don’t let others do your thinking for you on this 9/11 anniversary #12. The truth is out there, and the official narrative does not add up.