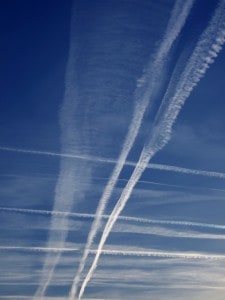 Climate remediation, the new Orwellian phrase for geoengineering or chemtrails, is the aerosol spraying of nano-particles to genetically modify all life on Earth. It is connected to eugenics and transhumanism.

to replace the more commonly known terms of “geoengineering” and “chemtrails”. Presumably those two terms, especially chemtrails, had become too tainted with negative connotations in the public’s mind, and in a PR (public relations) attempt to market the global chemical spraying and poisoning of our atmosphere and planet, the Controllers had to invent a new term to put a more positive spin on what they’re doing.

But let’s make no mistake about it: whether you call it “climate remediation“, “geoengineering” or “chemtrails“, it is a planetary-wide aerosol spraying program which releases barium, strontium, aluminum and other nano-particles into the skies. From there they will fall below into the air we breathe, the water we drink and the soil in which our food grows, without the informed consent (or even the knowledge) of the public. It is being forced upon all of us.

So where did these PR spin doctors get the term “climate remediation” from anyway? Remediation is defined as “the correction of something bad or defective”, so the implication is that the climate (not humanity or its psychopathic political leaders) is somehow bad. However, the truth is that there is nothing bad or wrong with the climate. It’s not changing like we think it is – the notion of man-made global warming is a scam that has been well exposed by Lord Christopher Monckton and others. What needs remediation or remedying is our group of self-appointed rulers (the New World Order [NWO] Controllers made up genetically-related individuals, including many of the world’s top politicians, corporate elite and so-called “royal” bloodlines) and their tyrannical, greedy and fearful mindset.

The whole concept of climate remediation is a scam, because you can’t fix environmental problems by spraying more crap into the sky and expecting everything to be rosy once again. Of course, the real intention behind the geoengineering program is not to fix anything, but rather to slowly and gradually smother the entire planet with nano-particles that will make their way into every living organism on Earth, plant, animal and human. In this way the totality of life here will become genetically modified and artificial, and we will become “transhuman” or “posthuman”, submissive, unable to reproduce and engineered to submissively perform specific tasks for an elite class. Sofia Smallstorm did a great job of exposing chemtrails in her film “From Chemtrails to Pseudo-Life: The Dark Agenda of Synthetic Biology“. I highly recommend watching it, since it connect the dots between geoengineering, eugenics, transhumanism and synthetic biology.

Climate remediation is just another example of the Controllers using an innocuous and nice-sounding phrase to hide a deadly agenda. Get wise to the geoengineering scheme and inform everyone you know. With enough awareness, we can put an end to this madness.

Previous Article
The Conspiracy is Over – If You Want It
Next Article
Hillary Clinton 2016: Coldhearted, Serial Liar to Become 1st Female US President?