The Conspiracy is Over – If You Want It

The Conspiracy is Over – If You Want It 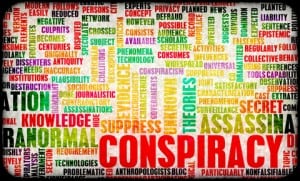 The conspiracy exists only because of our inner wounds, which unconsciously the system up. Once we heal them the conspiracy will collapse like a house of cards.

– if you want it. The conspiracy is us! We hold it in place, we feed it and, psychologically speaking, we project it into existence. Like the people at the bottom of a human pyramid, we support the conspiracy’s foundation. This may come as quite a shock for some people, who are used to thinking that “they” are controlling us, whether “they” be the Illuminati, the Bilderberg Group, the Vatican, the Queen of England, the CIA mind controllers, the NSA or the Reptilians. Believing that they can control us is a disempowering belief. That’s what we aiming to step away from! We know that cops, bullying bureaucrats and quasi-governmental agencies like the IRS operate on bluff a lot of the time. Without bluff, a few could not control the many. It’s the same principle with these elite organizations – they can’t control every single person, so they have to create the illusion they are all-powerful to keep us all in line.

The conspiracy is over if we want it to be. We’re the ones allowing it to exist – so we can also be the ones to end it. How? By realizing how we unconsciously prop the system up. We all have wounds, emotional scars, inner demons and trauma from the past that we carry around with us. They form part of our shadow, as psychologist Carl Jung described it. Each of us has an individual shadow, but as a society we form a collective shadow. For example, let’s say your individual shadow contains feelings of inadequacy or lack of self-worth. If enough people carry a similar wound, we then get a society of people who doubt themselves and are less likely to assert their rights. They can become easy prey for a bully or authoritarian-type of personality who enjoys being in charge and ordering others around. Sounds like a major part of the conspiracy we’re facing right now, right? Or, for instance, let’s say you have a society with a collective shadow made up of emotional disconnection, where many people have troubling connecting with their heart and feelings. This leads to situations where horrible events (torture, murder and war) start occurring, and there is not enough opposition to stop them, because most people have become numb and desensitized to the horror (and just ignore and deny it). Again, sounds just like the current insane world, doesn’t it?

If you’re not whole within and of yourself, you invite parasites in to take advantage of you. The same thing is true collectively; society has unwittingly invited parasites in. Federal Reserve, anyone? The utterly ludicrous and mathematically insane fractional reserve banking system we have is a fine example of exploitation by financial parasites.

The roots of the global conspiracy can all be found in human psychology, or more specifically, in our unexamined wounds, our hidden scars and our unresolved trauma. Each one of us alone is responsible for bringing these wounds to the light and healing them. No one else can do the work for you (although there are many natural and holistic healing modalities which can help you). So there’s really no one else to blame … and there’s really no where else to start but inside of you!

All-powerful conspiracy? No way. Do your inner spiritual work, heal your wounds and watch it fall like house of cards. The conspiracy is over – if you want it.

Previous Article
Cause of Cancer Explained? Widespread Monkey Virus SV-40 From Old Polio Vaccines Could Be One of the Factors
Next Article
Climate Remediation: Orwellian Newspeak for “Geoengineering” and “Chemtrails”