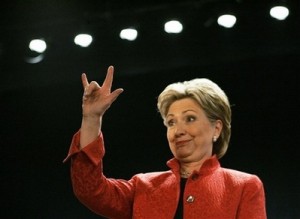 – not because it wouldn’t be fine to have a female US president, but rather because Hillary Clinton is a coldhearted, serial liar, a mind controller and exploiter of abused women, and a high-up member of the Illuminati working to implement the NWO (New World Order). With her long list of crimes and skeletons in the closet, she has a lot of audacity daring to run for President, but apparently her run has been confirmed by Angelo Tsakopoulos, friend and donor. The Hillary Clinton 2016 campaign will undoubtedly do everything they can to suppress these skeletons, but certain facts are clear: Hillary is a member of the CFR (Council on Foreign Relations), a Rockefeller-backed private wealthy group dedicated to destroying national sovereignty and ushering in a One World Government. She has already been caught on camera admitting that she and the US Government take their marching orders from the CFR and go to it to get told “how to think about the future.” However, her list of betrayals, lies and crimes goes far beyond that.

Hillary Clinton has already been exposed by Cathy O’Brien (in “Mind Control: For Reasons of National Security” and “CIA Mind Control – Out of the Darkness Into the Light“), a victim of trauma-based mind control who was habitually tortured and raped by Bill Clinton, Gerald Ford and Dick Cheney, as well as by senior Illuminati figure George H. W. Bush (George Bush senior). During her years of bondage as a mind-controlled sex slave for the rich and powerful, O’Brien recalls that she was forced to perform oral sex on Hillary. Together with her husband Bill, the Clintons have been involved in a staggering number of suspicious deaths (click here for a list of the Clinton body count), including the murder of political opponents and journalists who exposed their crimes. And what about Hillary’s involvement in the drug smuggling (and cocaine snorting) that went on at Mena, Arkansas? Or her association with cocaine smuggler Jorge Cabrera? These and more form a long list of questions you can be sure the Hillary Clinton 2016 campaign will never address and will do their best to erase from existence.

Hillary Clinton 2016 would be a shockingly bad idea for America – but then again, given the history of US presidents from Illuminati and “royal” bloodlines, it would hardly be a change in course from what we’ve already lived through.