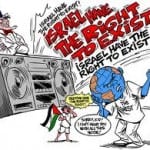 The Rothschilds and other Zionists are deadly afraid of being challenged about Israel’s supposed right to exist, because it has none.

Israel’s right to exist needs to be questioned.

Israel is essentially a private country of the Rothschilds – who own around 80% of the land, built the Israeli Supreme Court and were instrumental in setting up the foundations for the country’s existence in the first place. Zionists point to the Balfour Declaration as the legal justification for existing. The Balfour Declaration was a letter by the then British Foreign Secretary Arthur James Balfour to Baron Rothschild (Walter Rothschild, 2nd Baron Rothschild), who was a leader of the British Jewish community. The letter was to be presented to the Zionist Federation of Great Britain and Ireland. Presumably, knowing the Rothschilds and their shenanigans, England and its politicians were being pressured or forced into supporting the Zionist cause in exchange for money to help them win WWI – money which the Rothschilds could easily furnish, since they owned the controlling share of the Bank of England.

It is patently absurd, however, for any Zionists or Israelis to claim that their presence in Palestine is lawful due to a British document. Britain is a 3rd party – it has nothing whatsoever to do a in matter between Israel and Palestine. Britain was a powerful country at that time – perhaps the 1st or 2nd most powerful in the world – and so any so-called authority the Zionists claim to have from the UK is based purely on might and arrogance – not on law, ethics or justice. The Rothschilds and other Zionists wanted the support of a powerful country with a big Navy and lots of guns to force their will on the innocent Palestinians. It’s all about coercion and the philosophy of “might is right” which pervades the current thinking of the elite NWO (New World Order) Controllers.

Even if Britain has some magical, make-believe, legal authority to strip the land of a group of citizens and hand it over to another group, what is the rationale for stealing land from people currently dwelling there and handing to others who claim it was stolen from their ancestors long ago, or that their forefather used to live there? According to that logic, Britain, the US and other European colonial nations would have to hand back millions of acres of land they still possess. Are we just going to steal and redistribute land any time some group comes along and claims their ancestors used to live there? That goes against every kind of law we have, as well as plain common sense. And yet, this is the supposed basis for Israel‘s right to exist. Insane, isn’t it?

Lastly, it seems many have overlooked a very important condition Balfour placed on the Zionists, if they were to settle in Palestine: “His Majesty’s government view with favour the establishment in Palestine of a national home for the Jewish people, and will use their best endeavours to facilitate the achievement of this object, it being clearly understood that nothing shall be done which may prejudice the civil and religious rights of existing non-Jewish communities in Palestine …” Mmm. I wonder if the ongoing Israeli theft, murder and genocide against the Palestinian people would be considered as prejudicing their rights. Wake up world. Let’s do something about this disgraceful situation.