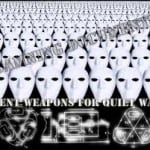 People intuitively know something is horribly wrong with society today … but they can’t quite put their finger on it. Such is the cunning power of the silent weapon.

Social engineering can be defined as the manipulation of people

within a society to force that society to move in a certain direction or to adopt new norms – for the benefit of the manipulators. Since we are immersed in this manipulation so deeply, it can be very hard to spot this kind of subtle control. The people who run the world (the social engineers) have cleverly built a prison wide enough so that it’s very difficult for the average person to even believe he is in a “social engineering” prison – let alone see the walls. As the German poet Goethe once said, “None are so hopelessly enslaved as those who falsely believe they are free.”

Part 1 of these social engineering articles deals with “Silent Weapons for Quiet Wars“, a remarkable document that was found in 1986 in an old IBM copier. What makes this document so credible, and at the same time so diabolical, is that it spells out very clearly the plan to conquer the world silently, quietly and without anyone realizing. It calls for a quiet take-over of society by the self-appointed rulers of the world, elsewhere referred to as the NWO (New World Order). It is written as an instruction manual for those “in the know”, those in the elite club characterized by their ruthlessness, cunning and lack of empathy.

The document explains what is meant by a “silent weapon”:

It then goes on to highlight the most insidious aspect:

The public might instinctively feel that something is wrong, but that is because of the technical nature of the silent weapon, they cannot express their feeling in a rational way, or handle the problem with intelligence. Therefore, they do not know how to cry for help, and do not know how to associate with others to defend themselves against it.”

This last sentence perfectly sums up how most people feel about society and the direction we are moving in. They intuit that something is wrong, but they can’t put their finger on it, so cleverly is the silent weapon disguised. The Controllers use the mainstream media to keep people ignorant, “confused, disorganized and distracted with matters of no real importance.” Good examples of this are the amount of focus that goes onto gossip, sports and entertainment, as well as how the topics of debate are narrowly confined within presidential election debates.

“Silent Weapons for Quiet Wars” is a very important document to read to educate yourself about the reality of the social engineering which is being used to usher in the NWO. There is a group of people – European royalty, business leaders, politicians and bankers – who have decided to appoint themselves as leaders of the human race and are taking it upon themselves to steer the direction of evolution. Their vision is of a global totalitarian dictatorship, with themselves as rulers at the helm, and everyone else as servants or slaves, with lives controlled down to the millisecond. The key to stopping such an agenda is to understand it.