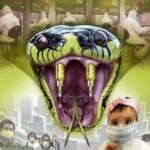 Make no mistake about it: vaccines are loaded with toxic ingredients like mercury, aluminum, MSG and formaldehyde, and can have severe side effects – including paralysis and death

– in fact in the US the National Vaccine Information Center estimates that perhaps 10% (and maybe even only 1%) of cases are reported. If you visit the VAERS (Vaccine Adverse Event Reporting System) website and look at the data for 2011, you will find that, as highlighted Craig Stellpflug in this Natural News article, there were 51 deaths that were caused by the flu vaccines, along with 232 life threatening events, 116 permanent disabilities, 739 hospitalizations, 109 prolonged hospitalizations, 4,039 ER visits, and 6,221 “not serious” reports. Yes, all of these were reported as a result of a vaccine injected or introduced into someone’s body.

Those odds are quite frightening. Why is Western medicine pushing a supposed treatment protocol like vaccines so hard when the rate of adverse reactions is most likely over 10%? One in ten people who get the flu shot or some other kind of inoculation are going to end up with a side effect, from mildly uncomfortable to deadly serious. There are a few layers to the answer. Money, of course, is an obvious one. The giant pharmaceutical companies have a monopoly and make a fortune selling their toxic vaccines to governments, hospitals and doctors all round the world. The deeper reasons, though, lie with the dark NWO (New World Order) agenda of subduing the masses and implementing depopulation. A sick, weakened and compromised population offers less resistance to authoritarianism, and the less people there are, the easier they are to control. Operating as a disguised slow-kill or soft-kill rather than a direct genocide, vaccines are truly a weapon of mass destruction as Dr. Rebecca Carley suggests.

Previous Article
DNA Activation or DNA Mutation: The Fate of the Human Genome is in Our Hands
Next Article
Questioning Israel’s Right to Exist