Are Parts of Organized Religion Satanic?

Are Parts of Organized Religion Satanic? 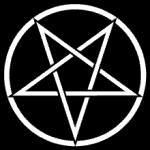 Are parts of organized religion Satanic? Just look at the Christian crucifix (sacrifice) and Eucharist (flesh-eating), as well as the Jewish circumcision (blood-drinking) rituals.

Why are certain aspects of organized religion Satanic?

Most of us who grew up with a religious background are probably accustomed to all the strange rituals that seem to accompany religion, after years of being immersed in it as children. But how many have actually taken a step back and taken a critical look at the bizarre, gory and – yes, most definitely – Satanic rites and rituals that have been incorporated into religion? Let’s examine some of these, and explore the organized religion Satanic connection, which is hidden in plain sight. 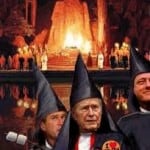 Famous politicians have been caught on camera attending Satanic rituals at Bohemian Grove.

Satanism is a religion in itself, since it involves the worship and invocation or dark “gods” or forces for various nefarious purposes, such as manipulation, destruction or death. Etymologically, the word “Satan” means “opposer”, and so Satanism can be thought of as the opposite of anything life-supporting and sustaining. Satan is inextricably linked to Saturn, etymologically, astrologically and in many other ways. Saturn, god of time, law, tyranny, harvest and banking and death, is a strong focal point of Satanic worship. Importantly, Satanism works by inversion (note how the classic Satanic symbol is an inverted pentagram), by turning everything upside down, turning evil into good and pain into pleasure. Orwell neatly summed up the Satanic motto in 1984 with “War is Peace, Freedom is Slavery, Ignorance is Strength”.

The world is not ruled by America, or Britain, or Israel, or the Jews, or the Jesuits; it’s ruled by secret societies and Satanists who control these countries/institutions and who practice coldhearted manipulation of others through powerful black magic and mind control. 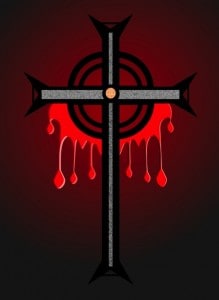 Have you ever wondered why the crucifix is the symbol of Christianity?

The crucifix has become a dominant symbol of Christianity, and while it may not be the symbol chosen by every single Christian sect, it is certainly preeminent in Catholicism. Look around at your nearest Catholic church and you’ll spot it: the gory, disfigured, abused and sacrificed image of a man hung and beaten to death. Yet somehow, the majority of people have accepted this image as normal and have been led to believe it is actually a sacred or special image. In true Satanic fashion, the horrible death of Jesus has been twisted and inverted into something worthy of celebration.

Now, am I missing something here, or are not the main points of Jesus’ life and teachings (at least insomuch as we can trust the Bible – but that’s another story) unconditional love, forgiveness and transcendence of the material realm? If so, then why are they not represented? Why are they not symbolized? Why not depict a man with a massive heart or chest, with rays coming out? Why not depict a man hugging his friends? Why not depict a man bending over to wash another’s feet? They are countless more positive symbols which could be used if the real point of Christianity was to uplift people and help us focus on love (and some Christian art does do this, but it is a vast minority). Yet, Christian Catholics are given an image of bloody sacrifice to hang around their necks and put on their desks. To rub salt into the wounds, they are made to feel guilty that their “sins” somehow have some connection with what a man called Jesus did 2000 years ago. (By the way, the word sin comes from a word meaning “to miss the mark”; it means “mistake” and originally had no moral connotations.)

And, as the former Vatican chief exorcist said, “The Devil resides in the Vatican and you can see the consequences.” 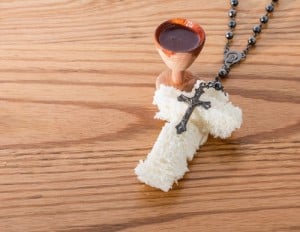 A second organized religion Satanic element is the Eucharist, one of the 7 sacraments of Christianity. It involves the symbolic eating of flesh and drinking of blood. Christian apologists will of course deny any connection to cannibalism, and insist rather that this sacrament (sacrifice) has its origins in the Gospel of Jesus’ words and is instead only meant to represent that we are taking in or imbibing the words and message of Jesus.

But hang on a second. Why on earth would you want to confuse taking in someone’s message with physically eating their flesh and drinking their blood? I’m sorry, I don’t buy that this is a great way to represent the ideal of modeling yourself after another’s behavior. Generally, I don’t go around eating my friends or drinking my family as a sign of respect. I would suggest instead that this is further evidence of an organized religion Satanic connection, and that this cannibalistic idea was inserted into the Jesus story after his death to dilute and subvert the power of his teachings. (Alternatively, for those that don’t believe Jesus ever existed, it may have been written into the Jesus story right from the start – but again, another story).

A third organized religion Satanic element is how many religions contain sects or branches who practice blood vows – i.e. the writing of supposedly sacred vows to God in your own blood. If you have ever seen footage of a Satanic ritual (e.g. in the last 5 minutes of this film, but be warned, it’s gruesome), you can see the use of pentagrams and blood. Participants willingly cut or injure themselves to contribute their own blood to the ceremony. Blood is the fluid of life for a human, so carries a human energetic signature when used in black magic ceremonies where dark entities are summoned to feed off it. Recently a former Franciscan nun came forward and exposed how she was told to write vows in blood by the head of the order, Father Manelli, based in Frigento, Italy:

“Father Manelli was satisfied that we did this practice because it made our love for God more authentic, this eternal vow with God … made with blood.”

“We pierced our skin with needles before writing on the [initiation] card and we were happy to do it.” 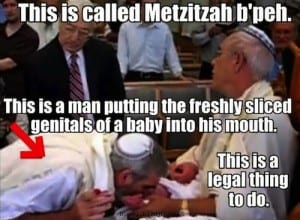 Another organized religion Satanic element is the Jewish circumcision ritual called brit milah. Did you know that it involves the rabbi sucking the blood from the young boy’s penis after it has been cut and mutilated? In my opinion, such behavior is not only a Satanic act, but it is also an act of pedophilia and cannibalism. It’s hard to believe we’re in the 21st century and yet such barbarism still exists in the so-called “civilized” world, but there you have it. Such pain-causing rituals could easily lead to severe psychological damage in those who receive it, and sexual dysfunction later in life. It subconsciously gives the baby the message that it’s okay for others to mutilate your genitals, abuse you and suck your blood. In mythology Saturn ate his own offspring. It’s no coincidence that Satanism and pedophilia are connected, by the way, for as David Icke says, they are the cement which holds the global conspiracy together. 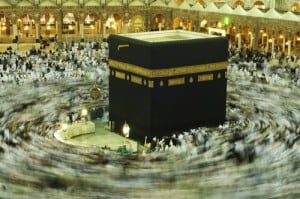 Speaking of Icke, in his latest book The Perception Deception, he reveals the Saturnian (Satanic) influence behind many of today’s institutions and religions. In one chapter on the organized religion satanic connection, he reveals how the black cube is another symbol of Saturn. How interesting and uncoincidental, then, that it is a central part of Islam for Muslims to make a pilgrimage to Mecca to worship an enormous black cube known as the Kaaba. This is blatant saturn worship, but it is disguised as something else, so the overwhelming majority or Muslims and non-Muslims would have no idea what is actually going on – which is exactly how the elite operate the New World Order worldwide conspiracy, by subterfuge and deception.

These are just 5 examples of numerous organized religion Satanic elements. So why are parts of organized religion Satanic? I would suggest because it has been infiltrated and subverted, moving away from an experienced-based spirituality (in which the individual is encouraged to find divinity within), to a dogmatic, faith-based system (in which the individual is taught that divinity is without, or that God is outside of them and separate from them).

Beware of organized religion; there is some truth in it, but it has also been twisted and there are plenty of pitfalls to lead you astray. If you want to learn more about organized religion or Satanism, visit ToolsForFreedom.com.