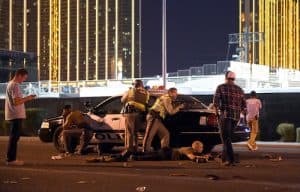 This CNN image of the Las Vegas mass shooting shows people standing very close to the police and even calmly using their cellphones. Why? Image credit: CNN

that occurred on the night of October 1st, 2017, is without doubt another false flag operation. The clues are everywhere, the official narrative is full of holes and the event fits the pattern of the false flag formula we have to come to know. We have another patsy who is a highly unlikely precision killer, we have evidence of multiple shooters, we have foreknowledge and we have no semblance of a motive. We live in such a twisted world that now, when events like these happen in the US, in an attempt to get to the truth we have to truly consider the possibility that the incident may have been a false flag hoax, i.e. a drill with crisis actors, fake ammo and fake blood. However, in this case, I personally know someone I trust who said their daughter’s friends were shot and injured. Many people are confirming that real people did indeed die in this Las Vegas false flag operation. So, was it a mixture of real casualties and crisis actors? Is this the new way the NWO conspirators now handle these events? Let’s take a look at the evidence for this Las Vegas false flag op and you can decide for yourself.

Las Vegas False Flag: Elements of Real Deaths and Elements of Fakery – A Look at the Evidence

Right off the bat, the official narrative is very difficult to swallow for many reasons. It seems impossible for an out-of-shape 64 year old man, with no military training, to kill 59 people and injure 500 from the height and distance he was at in the time he was said to have fired. Many videos have exposed the muzzle flashes that were occurring around the 4th or 5th floor. If the bullets were even real, there were multiple shooters.

However, it is far from proven that there were actually real bullets fired that killed real people. Consider these 3 pieces of eyewitness testimony that used to be in this video (now taken down … surprise, surprise). A man down on the ground had claimed that:

Another person in the same video had shouted 3 times (now here):

Someone in the comments below that video had claimed they knew someone who died, and linked to this LiveLeak video. However, this video doesn’t definitively prove anyone has died. It shows people who appear to have been hit … including some that bystanders say were hit in the head but are still breathing (is this even possible?). It also shows more of that bright red “blood” that was used during the Boston marathon false flag bombing (see image below). 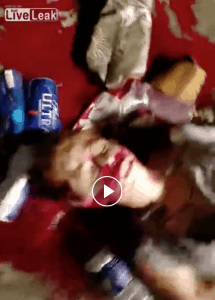 Where There’s No Smoke, There’s … No Fire

If the patsy Stephen Paddock really had discharged his AR-15 rifle for 10+ minutes as we were told, there would have been plumes of smoke emanating from the window from which he was firing … yet in the multiple videos of the event, there was no smoke. Not even a little. Therefore, how can we seriously entertain the notion that real shots were fired from the 32nd floor of the Mandalay Bay hotel?

How is it that eyewitnesses in this video at the 9-min. mark were able to see where the alleged shots were coming from, but it took the cops (in CCTV-ville Las Vegas) an entire 72 minutes to get to the scene? 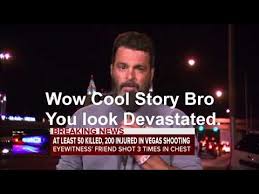 Remember the crisis actors in false flag ops like 9/11 who just knew too much information right after the event had unfolded – information they could not possibly have known were they not plants, being handled by governmental operatives? This guy on 9/11, “Mark Walsh”, is surrounded by the Men in Black as he trots out his story about how he witnessed the whole event and that the towers collapsed “mostly due to structural failure because the fire was just too intense.” Talk about a scripted narrative! Who talks like that? Who talks like that right in the middle of an emotional crisis? The same type of planted actors can be found in the Las Vegas false flag too. This video exposes some of them who appear to have incredibly detailed information about the event that could not possibly have known unless they were reciting a script.

Every false flag shooting or bombing seems to have some key “heroes” who were not only eyewitnesses but also active participants in saving people’s lives. In the case of this Las Vegas false flag op, the MSM have decided to give a lot of air time to a guy we are told is called “Mike Cronk”. Mike apparently saved his buddy “Rob Macintosh”, who, we are told, was shot 3 times in the chest but still survived … and seems to be doing remarkably well in hospital, fully conscious and smiling for the cameras. Amazingly, Cronk didn’t even get any blood on him despite being next to his best friend who got shot in the chest so would have been spurting blood everywhere. This video shows footage of Mike Cronk’s testimony and the “injured” Rob Macintosh who isn’t even hooked up to IV. 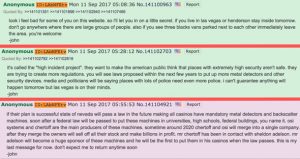 There are at least 2 examples of foreknowledge here. The first is the Hispanic woman who allegedly told everyone that “you’re all gong to fucking die” 45 minutes before the shooting started. The other is the prediction made by an anonymous user on 4chan (see image above). Truthstream Media shone light on the motive, which is not only the predictable gun control agenda, but also the more specific agenda to roll out metal detectors/body scanners throughout American hotels – as a stepping stone to having them virtually everywhere in society, so that wherever you go you will be monitored, radiated and bombarded with personalized advertising as in The Minority Report.

Question everything. Like Sandy Hook and other false flag hoaxes, this Las Vegas false flag op has elements of being a hoax, yet there is also evidence real people were shot. Please post your thoughts and comments.