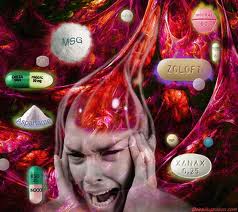 Big Pharma Drugs are at least the 6th highest leading cause of death in the US, and combined with iatrogenic deaths, the 3rd highest

Big Pharma drugs kill around 106,000 US citizens every year,

according to the 2003 medical report Death by Medicine, by doctors Gary Null, Carolyn Dean, Martin Feldman, Debora Rasio and Dorothy Smith. And even that number may be a conservative estimate, due to under-reported cases of adverse drug reactions. The real figure could well be double that. That makes Big Pharma drugs 16,400% more lethal than terrorists, as pointed out NaturalNews.com. These 106,000 deaths came from FDA-approved correctly prescribed medicines. So what’s going on? Why are so many people dying from prescription medication that the FDA is meant to be thoroughly checking abnd testing before it’s approved?
When you take a look at the leading causes of death in the US, something that kills 100,000 people a year would rank about 6th. However, consider this: there was recently a Starfield study published in the Journal of the American Medical Association entitled “Is US health really the best in the world?” It came to the conclusion that every year in the US there are 12,000 deaths from unnecessary surgeries, 7,000 deaths from medication errors in hospitals, 20,000 deaths from other errors in hospitals, 80,000 deaths from infections acquired in hospitals, on top of the aforementioned 106,000 deaths from FDA-approved correctly prescribed medicines. This makes the total of annual medically-caused deaths in the US a colossal 225,000! That’s pretty high! According to the CDC (Center for Disease Control) figures for 2009, Big Pharma drugs and iatrogenic deaths (deaths caused by Western medicine and doctors) were more deadly than Stroke, Alzheimer’s, diabetes, influenza and pneumonia, and nephritis. This would be the 3rd highest leading cause of death in the US!

Big Pharma drugs mask symptoms without addressing root causes of disease. The Government and Big Pharma are in the business of “managing” and “controlling” disease, not healing it. Try natural cures and super foods and supplements instead. This way you can boost your immune system without all the side effects – like an early death.

Previous Article
The Fake War on Terror: An Endless War Against a Faceless Enemy
Next Article
The Zionist Delusion: Zionist Jews are the “Chosen Ones” and Everyone Else is Less Worthy