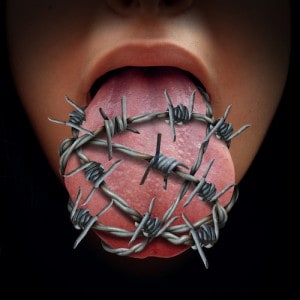 Political correctness is a Rothschild invention of language control. Like Orwellian Newspeak in 1984, its ultimate aim is to reduce the scope of free thought.

And language control is thought control. Period. The rise of modern political correctness (PC) is a great example of the cunning way in which social engineers such as the New World Order manipulators operate. Political correctness is soft censorship. It is intolerance disguised as tolerance. As George Carlin said, it is fascism pretending to be manners. It is running amok not just in Universities but now almost everywhere in society. Just as Orwell laid out so precisely in 1984, political correctness is the Newspeak which is threatening to limit our ability to freely speak and think, by reducing the number of available words in our vocabulary.

Political Correctness: Based on the Non-Existent “Right” to Not Be Offended

Truth is stranger than fiction. When you look at the twisted contortions the PC crowd is insisting people go through to rid their language of anything “offensive”, it has entered the theater of the absurd. Political correctness dictates what you can and can’t say, based on how “offensive” a word is. Right off the bat there are several problems with this. Firstly, who are the commissars, officials or authorities who are granting themselves massive power by getting to decide what ranks as “offensive”? Secondly, since when did “feeling offended” or “having your feelings hurt” become such an important issue that it legally justifies restricting everyone’s freedom? Last time I checked, freedom of speech was a genuine and legitimate human right (enshrined in the legal documents of many countries), whereas the “right to not feel offended” is imaginary and non-existent.

The illusory right to feel offended – a great way to shame people into feeling guilty for no good reason.

Thirdly – and most importantly – just as beauty is in the eye of the beholder, so too is “feeling offended” in the realm of the beholder. Words are words; each person is in charge of their own emotions; choose to ignore, respond or react to words how you want, but don’t blame someone else for your emotional state. You are in control of your own state of consciousness. To blame someone else because you feel angry, offended or upset shows an abandonment of responsibility and an utter lack of emotional and spiritual maturity. Since when did we humans become such crybabies that we couldn’t stand hearing or being called a word, a name, a label or a phrase? Grow up, please! 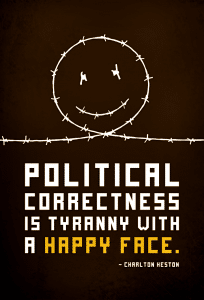 As always, there’s more to the story here. Political correctness has roots in marxism and communism. Wikipedia notes that “In the early-to-mid 20th century, the phrase ‘politically correct’ was associated with the dogmatic application of Stalinist doctrine, debated between Communist Party members and Socialists.” However, it goes back further to the Frankfurt School (Institute for Social Research) in Germany, which was set up in 1923. The Frankfurt school was a think tank for social engineering, aiming to spread collectivism (or its offshoots of socialism, marxism and communism) around the world. As this article from the Schiller Institute states:

“The task of the Frankfurt School, then, was first, to undermine the Judeo-Christian legacy through an ‘abolition of culture’ (Aufhebung der Kultur in Lukacs’ German); and, second, to determine new cultural forms which would increase the alienation of the population, thus creating a ‘new barbarism’.”

It goes on to point out those funding the Frankfurt School:

“although the Institute for Social Research started with Comintern [Communism International] support, over the next three decades its sources of funds included various German and American universities, the Rockefeller Foundation, Columbia Broadcasting System, the American Jewish Committee, several American intelligence services, the Office of the U.S. High Commissioner for Germany, the International Labour Organization, and the Hacker Institute, a posh psychiatric clinic in Beverly Hills.”

So we have reference to the Rockefellers funding the Frankfurt School, and it is well known that the Rothschilds funded the rise of marxism:

“Nathan Rothschild had given Marx two checks for several thousand pounds to finance the cause of Socialism. The checks were put on display in the British Museum, after Lord Lionel Walter Rothschild, a trustee, had willed his museum and library to them.”

Both of these key New World Order families are thus implicated in marxism, the Frankfurt School and political correctness. Interestingly, many researches have pointed out that political correctness is part of a broader movement of cultural marxism, which is the subversion of a country’s culture with collectivist ideology, as opposed to the more direct political version.

Yuri Bezmenov, a former Soviet KGB agent, said that “ideological subversion” would change the perception of reality of every American. He outlined how there was a slow brainwashing process taking place to change the individualistic culture of the West, consisting of:

4. Violent Change and Normalization (can take years, goes on forever).

All this was with the aim of making the West collectivist. The question is: how much has it worked? 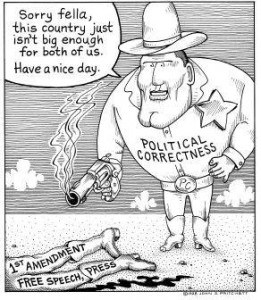 Political correctness vs free speech (1st amendment): who will win?

Some Examples of the Utter Absurdity of Political Correctness

Whatever good intentions political correctness may have had in trying to stop homophobia, racism, sexism and discrimination of any kind, it has long passed the threshold of absurdity. Consider the following examples of what the PC crowd is trying to make people say with their “bias-free language“:

This last one is especially interesting, given that the US Government is a corporation which lays claim to the entire United States of America, whereas American denotes a natural-born individual of the Republic. The PC police also want to eliminate the following words:

and phrases such as “I want to die” and “that test raped me”.

Donald Trump recently got heckled for using the term “anchor baby” by a PC journalist, who wanted him to say “the American born child of an undocumented immigrant”. What a mouthful. Funnily enough, that PC journalist was breaking his own inane rules, since now we’re been told that “American” is disallowed. Remember the “ban bossy” campaign? Grown adults indulging in utter stupidity. More political correctness and language control. How can you ban a word anyway? 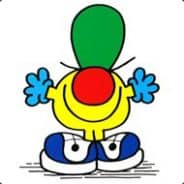 It’s not just specific words or phrases that the PC crowd want to obliterate. At some universities, they are banning entire ways of behaving. Check out these ridiculous university rules (taken from the book Choosing the Right College 2012-2013), which have moved beyond speech control into total behavior control:

– Colby College: banned any speech “leading to loss of self esteem”

– West Virginia University: banned the use of words “boyfriend” or “girlfriend” but instead told students they have to use the words “lover” or “partner”.

Look what the Grand Valley State University recommends we do to allegedly remove “bias” from our language:

Since when is becoming less descriptive equivalent to less discriminatory? Talk about a perversion of straight and ordinary speech! Political correctness is standing reality on its head. Here is a chilling quote from 1984:

“‘You haven’t a real appreciation of Newspeak, Winston,’ he said almost sadly … ‘In your heart you’d prefer to stick to Oldspeak, with all its vagueness and its useless shades of meaning. You don’t grasp the beauty of the destruction of words. Do you know that Newspeak is the only language in the world whose vocabulary gets smaller every year?’

‘Don’t you see that the whole aim of Newspeak is to narrow the range of thought? In the end we shall make thoughtcrime literally impossible, because there will be no words in which to express it …’”

Anything and Everything is Potentially Offensive

All words are potentially offensive. Every word could potentially be associated with something “bad”, so every word could come under the scrutiny of the PC police. Slurs, insults and derogatory language have always existed ever since humans could speak. You can’t just annihilate them. Even the concepts of “microaggression” and “hate speech” are failed notions, trying to make “having your feelings hurt” or “getting offended” morally or legally equivalent with harassment. There is no equivalence! Stick and stones may break my bones, but names will never hurt me … 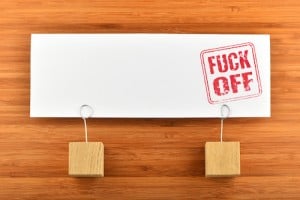 A message just in for those pushing political correctness and thought control. Please fuck off – and I mean that in the most respectful of ways, because I certainly wouldn’t want to offend anyone …

Conclusion: If You Care About Freedom, Ignore and Resist Political Correctness

I encourage anyone who has even a mild interest in a free humanity with complete freedom of speech, and total freedom of thought, to resist political correctness with every fiber of your being. If you are concerned about hurting people’s feelings unnecessarily, you can always find ways to express something in the right way. In those kind of situations, what really matters is the way you say words, not what you say.

It’s time for those hiding behind “feeling offended” to grow up. Stop demanding those around you change because of your lack of maturity. Stop trying to hijack everyone’s else freedom because of your timidity. Just as beauty is in the eye of the beholder, offense in the mind, attitude and reaction of the beholder.

It’s time to call a spade a spade. We need the spirit of straight talking. We need the courage to speak truth to power, not to go in the opposite direction and become afraid of saying anything. The real agenda of political correctness is to stifle objective investigation and free speech. Ultimately, it is to eliminate criticism of the NWO manipulators under the guise of stopping “hate speech” and making everything fair and equal.

Previous Article
Satanic Ritual Abuse: It’s Real, But It Can Be Healed
Next Article
Where the 2016 US Presidential Candidates Stand on Vaccines and GMOs